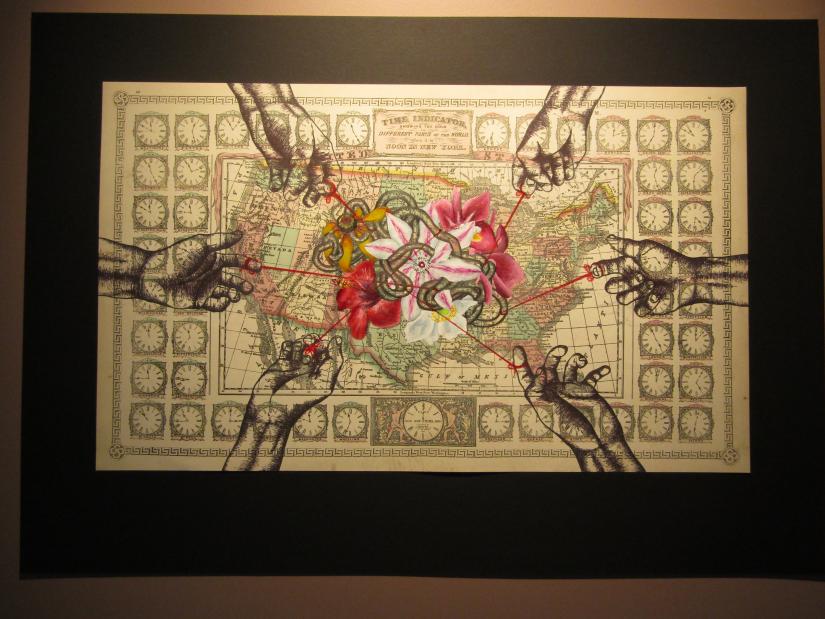 Taking inspiration from the words and observations of Black writers and activists, Hotchkiss School students created works of art that were displayed in Troutbeck’s gallery as part of the Troutbeck Symposium. Photo by Kaitlin Lyle

May 4, 2022
By
Kaitlin Lyle
kaitlinl@millertonnews.com

AMENIA — Honored to be stewards of the region’s hidden histories, area students presented their historical research into the early narratives of the Civil Rights Movement, the Harlem Renaissance, the National Association for the Advancement of Colored People (NAACP) and their connections to Troutbeck and the local region as part of the Troutbeck Symposium.

Exchanging greetings with the symposium’s students, area residents, educators and representatives circulated Troutbeck’s ballroom and gallery to admire the exhibitions on display. Offering extensive research through innovative displays, the students demonstrated their grasp of the connections they uncovered throughout their investigations. Guests absorbed profiles of Black icons, activists and athletes; considered the Spingarn family’s involvement in the Civil Rights Movement; and admired student artwork inspired by the words of Black artists and activists.

Seating themselves in the ballroom, guests were welcomed to the symposium by a pair of Salisbury School students, who thanked all the symposium’s staff and students for their participation; the sponsors for making the symposium possible; and the panelists for sharing their reflections.

Salisbury School students screened two of their videos for the public’s viewing, one of which focused on the Troutbeck Trail. By learning about the 1933 NAACP conference in Amenia and the region’s involvement in the Civil Rights Movement, students explained via video that they hoped to educate the public, bridge the gap between these “hardly known histories” and shed a light on the cultural renaissance surrounding the Troutbeck area.

Among Friday’s featured speakers, Jeffries offered guests a few thoughts on what the students were doing and why their work is important. An associate professor of history at The Ohio State University, he said he’s been taking his students to James Madison’s Montpelier in Orange County, Va., over the past couple of years. Toward the end of their tour, he said his students learn the room where the Bill of Rights was conceived sits on bricks made by children enslaved by one of the Founding Fathers.

Rather than deal with the truth, Jeffries said people try to either rationalize or deny this reality to avoid its implications. Borrowing a friend’s thoughts that “we hate history, we love nostalgia,” he explained people would rather hear about Martin Luther King Jr. than the Black Panther Party.

“This is a place of resistance,” Jeffries said about Troutbeck. “It belongs on that continuum of African American resistance and we have to talk about that.”

Through their work, Jeffries said the symposium’s students have done two invaluable things: They’ve made clear what the obstacles are and they’ve provided context for understanding.

“They’re providing us with a blueprint for moving forward in the future,” he said. “We have to support that, and not too quietly either. There’s not statue of limitations on this kind of work — this is enduring… and this is how we get better as a society.”