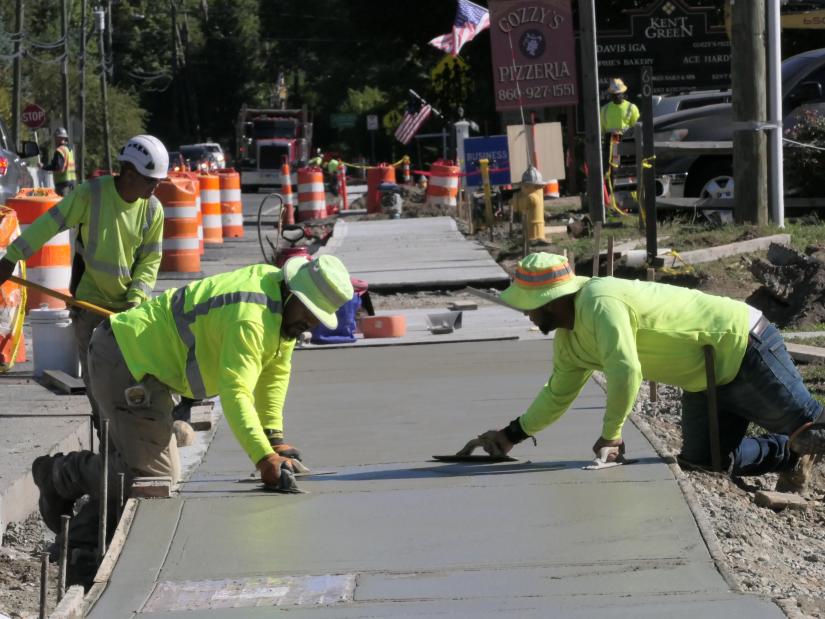 KENT — Project oversight being one of the responsibilities of the Streetscape Committee, concerns raised by that committee’s chairman about the sidewalk and curbing project were discussed by the Board of Selectmen at its regular meeting on Thursday, Sept. 1.

Streetscape Committee Chairman Mike Gawel reviewed his observations about the work as it is proceeding along Main Street and Bridge Street, reiterating areas of concern he had raised at the Aug. 22 selectmen’s meeting along with local stone mason Justin Money.

While Gawel acknowledged that the state’s regulations direct that granite curbing be placed atop compacted soil, he recommended to the selectmen that specifications for the next phase should include cradling the granite in concrete.

Pointing to the current work being done, Gawel said that there remain places where the gravel is not sufficiently compacted, although the construction crew is placing blobs of concrete at each end of the curbing section, trusting that the blob will hold the curbing in place.

First Selectman Jean Speck said that she has spoken with state Department of Transportation (DOT) officials and with SLR (project consultants) representatives to understand how the cradling model would be an improvement over the current state specs for concrete blobs. She was not ready to decide, she added.

SLR representative Mike Doherty commented that the gaps between the compacted gravel underlay and the granite should not occur and that he had corrected that situation to ensure that the entire curbing slab would rest fully on the gravel.

Doherty also indicated that concrete is being added to the sidewalk side of the curbing, but not to the street side, as the state DOT does not allow concrete to abut the street. Speck pointed out that the project is being done on state property, so the town needs to follow their specifications.

Responding to Gawel’s concerns about chunked curbing, Doherty said that the chunks will be removed and radial curbing installed on the curved portions.

Citing the specifications that two even coats of curing compound were to be applied to the sidewalks, Gawel described the application as “spotted.”

“They are not spraying an even coat,” Gawel said.

When the construction crew is compacting the gravel, no water is being used to moisten the gravel for better compacting, Gawel noted.

Gawel also continued his questioning of how North Carolina granite came to be used for the project.

Selectman Rufus de Rham reported that he had toured the project with Gawel recently. “There were a lot of small details, but they did add up,” he said, adding that the compaction should have been better.

“We’re paying for inspectors,” de Rham said, praising the dedication of the Streetscape Committee and their fund of knowledge brought to bear on the project.

“SLR is committed to providing quality service,” Doherty responded, noting that inspectors are covering several projects at once.

Continuing discussion about the North Carolina granite, Doherty noted that they seem to be the only supplier and the granite comes through unfinished with irregularities. He said that the material meets or exceeds state standards.

Selectman Glenn Sanchez joined in thanking the Streetscape Committee for its oversight.

“A lot of things have gotten out on the table,” Speck agreed.