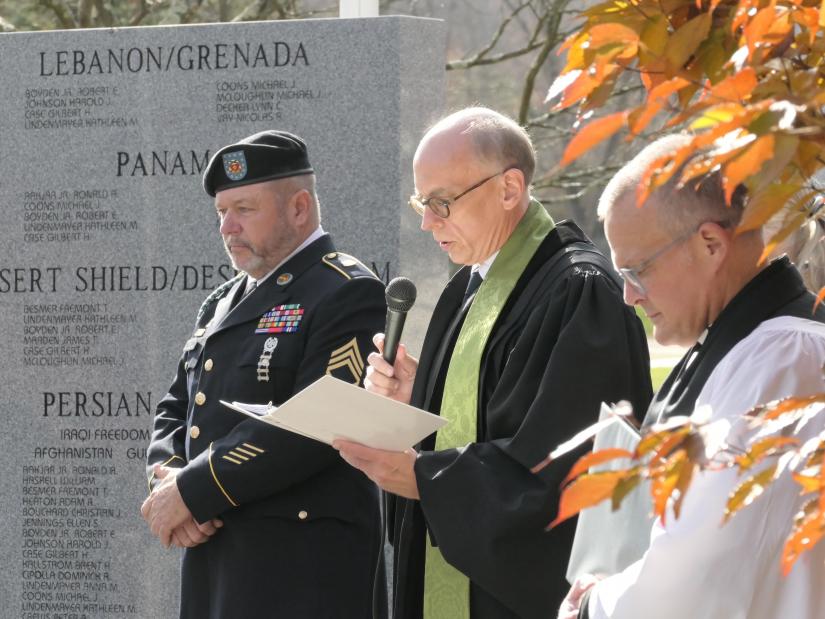 The Rev. John Heeckt, with Brent Kallstrom at his right, and the Rev. Douglas Worthington at his left. Photo by Lans Christensen

In Kent, 13 new names on monument

KENT — Area towns celebrated their veterans with ceremonies at schools, most of which were open for a half day on Nov. 11, and at town memorial monuments.

In Sharon, veterans helped with flag burning at the war memorial.

In Kent, Brent Kallstrom led the ceremony at the memorial near American Legion Hall Jennings Post#153, where he is the adjutant/commander. The Rev. John Heeckt of the First Congregational Church offered words and a prayer, followed by a rifle salute and taps by bagpiper Don Hicks.

First Selectman Jean Speck reminded the assembled group to be thankful for the service of the military veterans “not just this day, but every day.”

Veterans Committee Chair Andy Ocif said 13 new names had been added to the monument this year.

Following the service there was a luncheon at St. Andrew’s for veterans and their families.