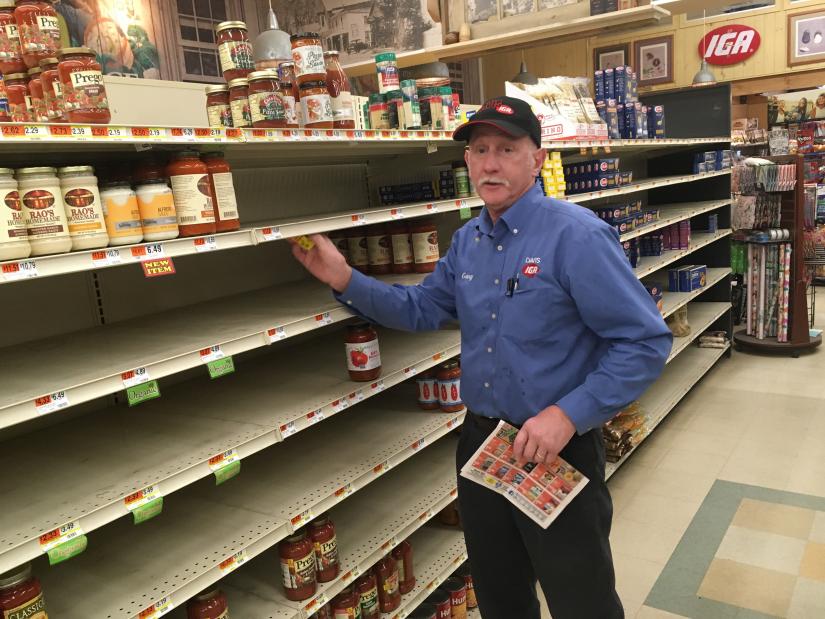 Gary Davis at the Davis IGA in Kent stood by shelves empty of tomato sauce.“This is like a snow day that doesn’t quit,” he said of the COVID-19 quarantine. Photo by Cynthia Hochswender

KENT — People with second homes here are fleeing larger cities to distance themselves from the threat of COVID-19.

For a small, rural community where weekenders make up about half the population, this trend is putting a strain on some services in Kent, which shares its western border with New York State.

“We are seeing a lot more customers, people who have second homes here who are hunkering down for a while,” said Gary Davis at the Davis IGA Supermarket.

“We had a record week last week, and I’m assuming we are going to have another one this week,” he said on Friday, March 20, in a telephone interview, between answering calls and responding to a rush of customers.

Even deliveries from his supplier to the tune of three trucks per week is not helping to keep his shelves stocked.

“Our wholesaler can’t keep up with the holes.”

The store is beginning to fill back in some of the holes left on shelves by an initial rush of customers, who were either stocking up or having to fill the shelves of a new rental. He has chicken again; there is toilet paper for sale, although there is a limit to how much can be purchased at one time.

One thing that surprised him was how quickly the middle aisles of the store were cleaned out.

“For years now people have been moving away from processed, packaged foods, but now I guess they feel they’re OK to eat again.”

In the 44 years that Davis IGA has been doing business in town, it has weathered its share of storm-related emergencies, most of them short-lived with an impact of one or two days. The coronavirus, though, said Davis, is something entirely else.

“This is like a snow day that doesn’t quit.”

At the venerable Fife ‘N Drum Restaurant and Inn, co-owner Elissa Potts said she, too, has seen an increase in the number  of weekenders escaping the city to take refuge in Kent.

“It’s kind of, not on the same terrifying degree as 9/11 … but people after the terror attacks in New York City came here to hunker down,” said Potts. “Only now, they are more restricted.”

Potts said she is doing what she can to keep the business running, the restaurant staff working and the community comforted — and fed. The restaurant is offering take-out meals with curbside service, or free delivery to Kent residents.

“I left some food in a garage just the other night,” said Potts, noting that many customers prefer to avoid personal contact.

Now that bars have been ordered closed, the restaurant is starting the sale of bottles of beer and wine for a reduced price in order to move some of its liquor inventory.

She will also soon be offering pre-packaged meals containing raw ingredients, to be cooked at home.

“Our local grocery store is besieged with demand, so I thought I’d help out.”

New offerings are being updated on the restaurant’s website at www.fifendrum.com, said Potts, who wants to be an asset to her community, despite the potential health risk to herself.

“We’ve been here for 47 years,” she said of the restaurant that was founded by her father, Dolph Traymon. “It will take more than this to get rid of me!”

A short distance away from the Fife, on Kent Green Boulevard, Namoo Korean Restaurant is keeping busy with take-out orders.

“We don’t do deliveries, but we do a lot of pick-up,” said manager Jae Lee, adding that, “A lot of people are coming in from the city.”

Lee said business is nowhere near the level it was before COVID-19 became a household name — and before the town’s three private schools closed, all of which have sizable Asian student populations.

But he said, the orders that are coming in are more substantial. Instead of individual orders, he is packing up family-size meals for lunch and dinner.

“The whole family; the kids are home.”

“Obviously it’s not like before,” but between gift cards and take-out, said Lee, he is cautiously optimistic his restaurant can survive. “We’ll have to see. If the government says all restaurants have to shut down, it will be a problem.”

Reflecting on the long-term impact on the inn and restaurant that he shares with his wife, Elissa, Fife ‘N Drum’s George Potts said via email that uncertainty lies ahead.

“We have had a few inquiries for rooms at the inn from folks exiting New York City, but any bookings we have gained have in no way replaced all the business we have lost from cancellations over the past seven to 10 days.”

He said after the doldrums of March, business usually picks up around Easter (which is in mid April), but this year “we have lost virtually all of those bookings for the inn,” as well as hundreds of Easter dinner reservations at the restaurant.

“Anything we have been able to gain back from New York City escapees is way less than what we have lost,”he said.

He and his wife hope that going 100% take-out will “in some way help ease the pain and keep our employees working until things clear up … but it’s very tough right now.”