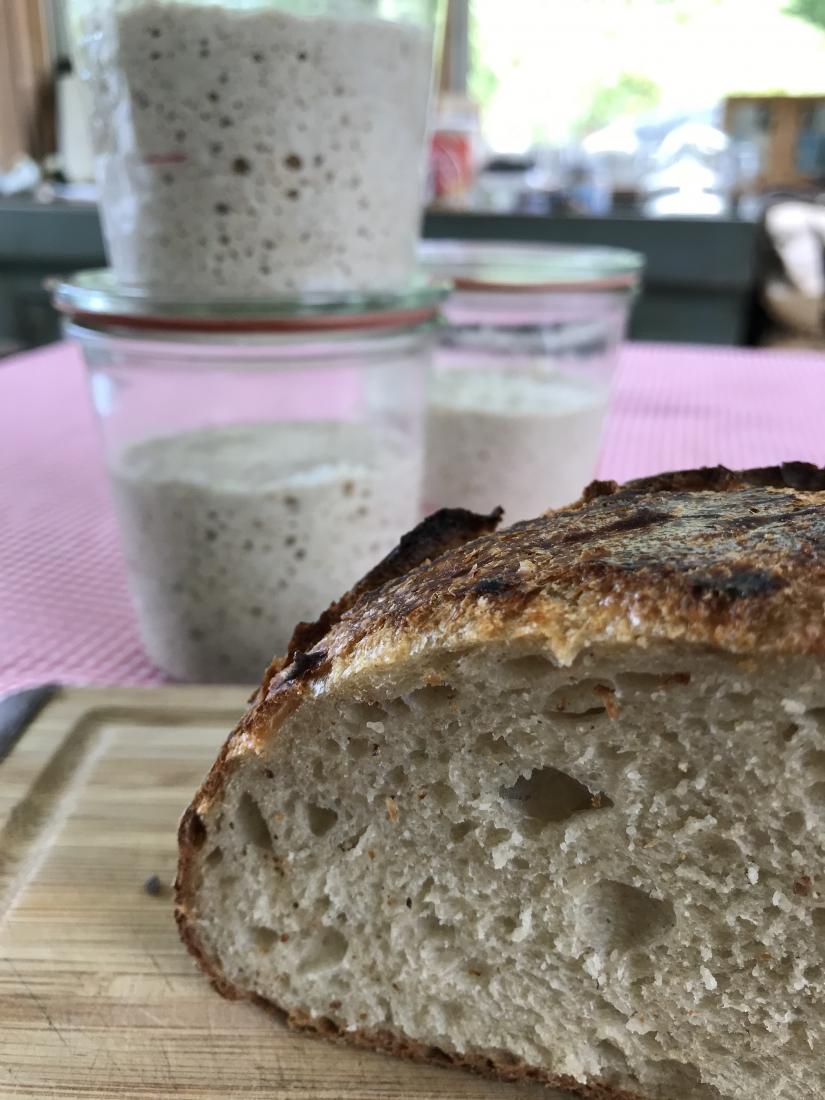 I used to think of white flour as the food equivalent of printer paper: White and bland and not very nutritious.

Two things have given me increased respect for the powdery white stuff.

One is that when bears break into our kitchens, they seem to always end up with white flour on their noses. To me that’s as if a burglar broke into your house and went straight for the white printer paper. It’s perplexing and intriguing and makes me wonder, “Hmmm, what is there about white printer paper that I don’t understand?”

The other is that, like all the rest of you, I started making sourdough starter and bread at the beginning of the COVID-19 pandemic. That wasn’t especially good timing, since of course both bread and starter require flour, and flour was in short supply until about two weeks ago.

Anyway, through a number of stealthy and clever maneuvers I have put together a large supply of King Arthur all-purpose flour, King Arthur bread flour, Maine Grains whole wheat flour and (as of last week) rye flour.

When you bake pastry, flour is just a means to an end: You need flour if you want to have cakes, cookies and pie crust.

When you make sourdough starter and you bake bread, you realize that flour is alive. Or rather (forgive me, I’m not a scientist): Flour used to be alive when it was wheat. It is no longer alive once it’s been milled into flour.

But something magical (Frankenstein’s monster?) occurs when you mix flour with water. The two of them combined entice bacteria to join them from the air and the result is a living, breathing substance called sourdough starter.

It’s important to note that good sourdough starter eats healthy bacteria that’s already in the air in your house (or your favorite bakery). There can also be bad bacteria on your flour, because wheat isn’t heavily cleansed before it is milled. That means it could be tainted with, for example, E. Coli from an animal relieving itself on a wheat stalk. For that reason, unless you’re a bear, you should not eat raw flour.

Wheat flour can, of course, also make anyone sick who is gluten intolerant. There are many other types of alternative flours. There isn’t room enough here to go into detail about all of them. But one thing I do feel confident about, even though I’m not a scientist, is that if you’re only vaguely gluten intolerant, your body will cope better with fresh bread, made either in a bakery or at home, rather than factory-made bread: The slower your flour transitions into bread, the easier it is for your body to absorb the gluten.

So many kinds of flour …

We are going to focus for the purposes of this article on the flours that lend themselves most easily to the creation of sourdough starter and, then, bread.

Last spring, I read multiple articles about people deciding to learn to bake bread during the COVID-19 quarantine. This led almost immediately to a shortage of flour, and also to a shortage of yeast for baking.

That kind of yeast comes in little cubes or packets. It’s a very easy, reliable method for making dough rise. It has been used for centuries all around the world and is especially useful for professional bakers, who need to wake up in the morning and make a set number of loaves that need to be more or less identical.

If you don’t have packaged yeast and if you are OK with your bread production being a little unpredictable, you can make sourdough starter and use it instead of yeast.

The process is very simple: You mix together water and flour and leave them out on the counter and, after a few days, you have starter and all you have to do is feed it daily with more flour and water. When you’re ready, you use it as the base for your bread dough.

It sounded simple, so I decided to try it myself. I figured then I could explain the technique to readers who were not able to find yeast but wanted to make bread.

That was back in about March. It’s now September and while I have managed to make excellent starter and, from it, really good bread, I have learned only one thing about making sourdough starter (and bread): It’s infinitely complicated and there are infinite ways to do it. Or rather, it’s incredibly simple and will work like a charm up until the minute that it stops working, and then you have to figure out another method.

It’s not necessary to get that wrapped up in your sourdough; and if you find it starting to take over your life, you can tuck it in the refrigerator. Once you do that, it’s like a houseplant and only needs to be fed and watered once a week.

I’m going to send  you to the internet to get the instructions on how to make your starter. Again, they’re not complicated but every day is slightly different during the first week, and it would take up too much space here to explain it. I like the technique at Clever Carrot’s website (www.theclevercarrot.com “Beginner sourdough starter”). But there are lots of good methods out there. You can never go wrong with seeking guidance from the King Arthur Flour website, for example.

Helpful tips: What to buy

So I won’t tell you how to make starter from scratch  — but I will tell you which supplies I’ve found to be useful.

Everyone who makes sourdough starter has their own things they like and methods they prefer.

But universally, one product that will make your bread-baking life easier is a small food scale. Scales are pretty similar, they all cost about $15 and they all do roughly the same thing. I bought one by Escali recently and it’s a cut above the other brands, in my experience.

Once you begin making starter,  you’ll need to store it someplace. I have found that the Ball and Mason jars are too hard to clean; once the sourdough drips on your jar dry and get hard, they turn almost to stone. The Ball and Mason versions have a lot of pattern in their glass and once the sourdough gets into those nooks and crannies you almost need dynamite to get rid of it (or of course a long soak in warm water followed by a cleansing in the dishwasher).

Which flours and why

Most important is your choice of flour and water.

I apologize to the planet and to all of us who are worried about its future but you really need to use a good quality bottled water for this; most tap water has bleach or other chemicals in it.

You also want a flour that doesn’t have bleach in it. Organic flours work well but aren’t essential, in my opinion.

I started out using King Arthur all-purpose flour, which worked great until it stopped working (bakers, by the way, prefer King Arthur because it has more protein than most of the other store brands and protein is very important to your bread and your starter).

My starter pooped out after a few weeks of just eating the all-purpose flour. I did some experiments and eventually found a very good organic whole wheat flour from Maine Grains. I shared some with my friend Anne, who reported that it made her starter go “berserk.”

That eventually pooped out too. Next I used a mix of 50% Maine Grains whole wheat and 50% King Arthur bread flour (which has even more protein than the all-purpose flour). I’m mixing it because I only have about 20 pounds of the Maine Grains, in my freezer, and I’m trying to make it last.

However, over the weekend I fed my starter some rye flour from Arrowhead Mills that I found at the Sharon Farm Market in the shopping plaza. The starter got very excited about the change in diet and got very big and bubbly on the first day, but then it calmed down on the second day.

The proof is in the bread, however, and the loaf I baked with that rye flour starter is especially delicious (photo above).

The bread I’ve been making with the whole wheat/bread flour starter has a definite sour tang to it, even though the dough itself is a mix of King Arthur all-purpose and bread flours.

The bread made with the rye starter just tastes deliciously like homemade bread. No tang.

I prefer it, honestly, to the bread made with the whole wheat-based starter. No doubt this will change over time —because the one constant in bread baking seems to be that nothing is constant.