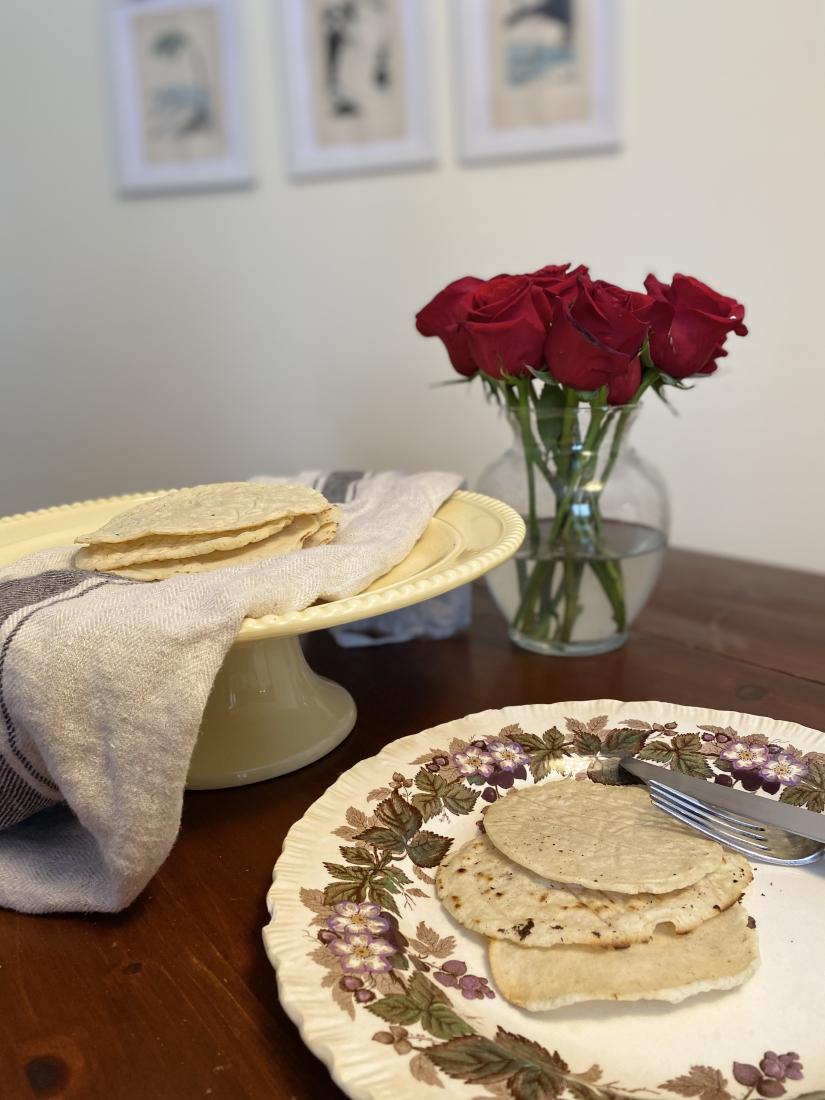 The key to a perfect tortilla: steaming

In COVID quarantine, I have devoted my time to learning how to bake, and decided to try (one more time) to successfully make tortillas by hand.

I learned two important things: One is that there is really no point in trying to make flour tortillas. The factory-made ones that you buy at the grocery store are actually pretty good; and making flour tortillas at home is pretty difficult. It’s like bolognese sauce; what they sell at the store is as good as or better than anything I’m going to make.

Corn tortillas are another matter. Because corn flour has no gluten, it’s a much simpler process — and of course if you have gluten sensitivity, this is a perfect gluten-free food transport system.

An incentive to make these by hand is that they are easy and truly superior to the fairly rubbery and tasteless corn tortillas sold at even very good stores.

However, I’ve tried corn tortillas in the past and the end result was too dense and too hard. Which leads to the other important lesson I learned this year, from an internet recipe at https://thecafesucrefarine.com/best-ever-homemade-flour-tortillas.

It was recommended to me by Ken Dempsey, one of the talented PT specialists at Geer in North Canaan. This flour tortilla recipe has become a dinnertime staple for his family.

Even though I still think it’s easier to buy than make flour tortillas, this recipe taught me the Essential Trick for Making Corn Tortillas: You must steam them immediately after you cook them.

Where to find
masa harina

The only thing that is hard about making corn tortillas is that you have to buy special corn flour, which is called masa. You can’t substitute corn meal or polenta; this flour is specially treated so it’s smoother and less grainy.

Masa harina is very easy to find. You can get it at Tienda Mi Esquina, the new shop in Amenia, N.Y., at 3294 Route 343 (next door to the post office, at the intersection where there is also a bank and the Four Brothers restaurant). You can also usually find it at large grocery stores such as Freshtown, which is also in Amenia.

If you don’t have a bag of masa harina in the house, then, yes, you will have to leave the house to go buy it. But even with, say, a 40-minute round trip to the store it’s still faster to make corn tortillas (about 45 minutes total) than it is to make flour tortillas, which take two or three hours (because they are made with flour, which has gluten, and the gluten has to rest before you can roll it).

The brand I buy is Maseca, and the bag specifies that you can use it to make tortillas. There are a couple other options, including one from Bob’s Red Mill.

But an added benefit of the Maseca brand, for me, was that it has a tortilla recipe on the package. It’s beautifully simple: Combine 2 cups of masa harina with 1 1/2 cups of warm water. If it seems dry, add a little more water, a teaspoon at a time.

Knead it for about 2 minutes in your mixing bowl. It’s a soft dough, and easy to knead. If you don’t know how to knead, you’re just basically pressing it together with the heel of your hand again and again until it comes together into a nice smooth dough, like Play Dough.

After you mix the dough, cover it with a damp cloth or some plastic wrap so it doesn’t dry out.

Heat a cast iron skillet over a medium high flame; as with pancakes, you’ll want to adjust the flame as you go along.

This recipe makes about 20 tortillas. Before you start to roll them out, cut out 22 squares of parchment paper (waxed paper is fine if that’s all you have) that are about 6 or 8 inches square. This might seem wasteful or fussy but trust me on this one: It will make rolling out the tortillas very easy.

Here’s another thing that might sound fussy but will make a big difference. This is the trick I learned from Cafe Sucre Farine. Before you start to cook your tortillas, get a small Dutch oven or other covered ceramic vessel. You can even use a large bowl, with a plate on top.

As you take your tortillas off the skillet, drop them in your pot/bowl and cover it immediately. This will steam the cooked tortillas and make them pliant and delicious. Do not skip this step.

Keep the dough balls covered; if they get dry and start to break when you handle them, just put a little water on your hands as you work.

Roll each ball out to about a 1/8 inch thick circle, between two squares of parchment. Leave the circles between the parchment, so they stack nicely and don’t dry out.

Cook them one at a time on your hot skillet. I find it helps if you put a tiny bit of canola oil in the skillet, but you don’t have to.

Cook each side for about 45 seconds; if your flame is hot enough, you should get brown spots.

Your tortillas will taste best right after you cook them. If you don’t eat them the same day you make them, wrap two or three in some plastic wrap and then put each of your packets of wrapped tortillas in a zippered freezer bag.

To reheat them, wrap them in foil and put them in a 275 degree oven for about 10 minutes.