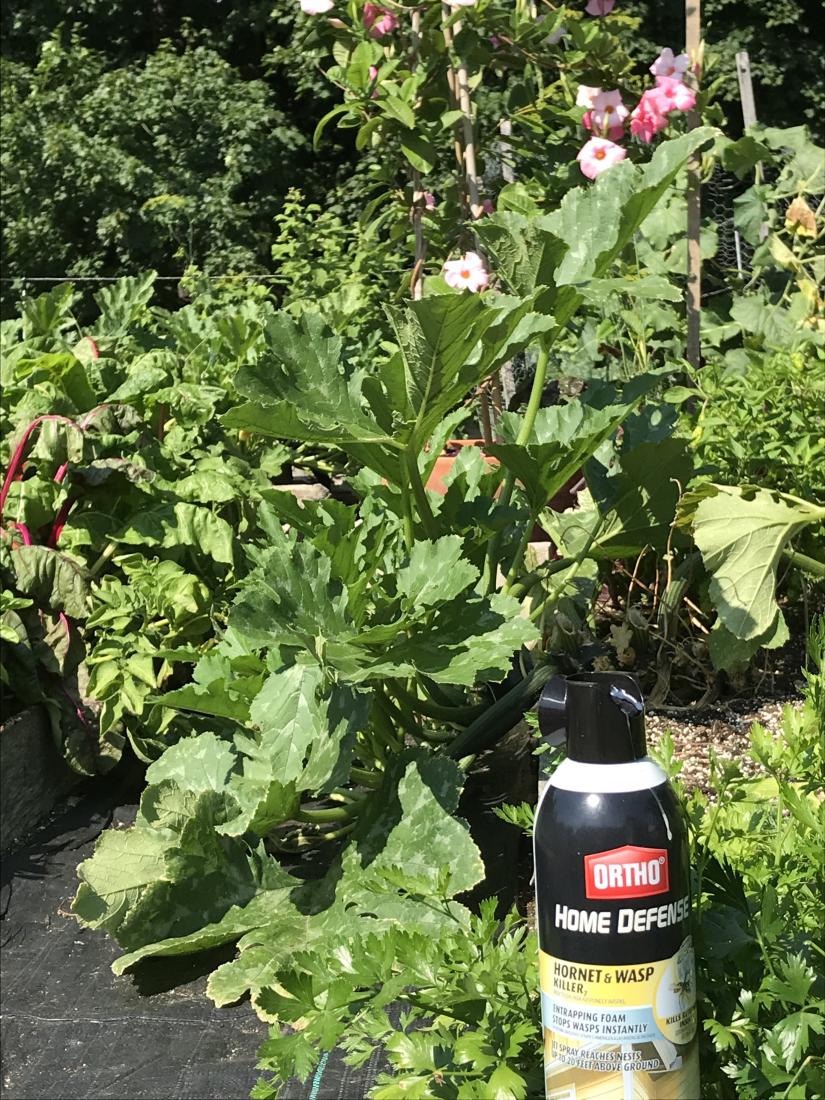 Beware of wasps in your garden and yard

We spend a lot of time in the Tri-state region thinking about tick bites, and sometimes forget that there are other extremely dangerous insects right outside our homes.

If you have a vegetable garden, the chances are that you have bees and wasps zooming around your plants. It wasn’t until recently that I realized that it isn’t the bees you really need to worry about (although you do need to worry about them); it’s really the wasps, which are much scarier and more aggressive.

I am in the awkward position right now of having a hornet’s nest inside one of my garden boxes, which means I can’t use hornet spray on them without potentially poisoning my garden. It’s possible I’ll have to take that box out and replace the whole thing at the end of this growing season anyway, but for now I’m trying ye olde internet  solutions.

I can’t yet give you a report on how this will work, since I’m just about to embark on this experiment but the short version is I’m using Bob Villa from This Old House’s instructions on building a trap out of a 2-liter soda bottle filled with vinegar and sugar. Wish me luck.

Of greater interest is knowing how to handle the sting of a wasp or a bee. The danger with wasps isn’t just the individual sting; it’s the repetition of multiple stings.

Bees seem to just lash out at you, but their stinger has barbs on it so that, for the most part, they’ll sting once and then fly away. When the stinger is pulled out of their body, it takes some of their internal organs with it, which is why the bee will die shortly after it stings you.

Wasps have a smooth stinger that they can use again and again.

They also seem to be more organized in the way they attack you. They will just randomly sting you if you get in their way or (especially) if you get close to their nests. But they can also organize the other members of their colonies to swarm you if they feel sufficiently threatened — if, for example, you mess with their nest.

One of the websites I researched on wasp avoidance stresses that you should not squash a wasp or it will send out a warning call and an SOS to the other wasps, and they will swarm and attack you.

For balance, I’ll note that wasps also do pollinate your plants and they are carnivores and will eat some of the other unpleasant insects that are in your vegetable garden.

Bees as we know are generally beneficial and are excellent pollinators. Just don’t step on one or get near its hive.

Based on my internet research, here is what you need to know about protecting yourself from wasp and bee stings. First of all, some stings provoke a potentially fatal anaphylactic response. Any information in this article is only for more modest stings. If you feel dizzy, anxious, sweaty, break out in hives, have trouble breathing, start to cough or have any of about a dozen symptoms, get to the emergency room.

The tips here are for the more common and simply painful and upsetting stings.

The websites for the Johns Hopkins medical school (www.hopkinsmedicine.org) and the Merck Manual (www.merckmanuals.com) stress that the first thing you need to do is take out the stinger, which can continue to inject venom into your body.

Don’t use a tweezers or try to pull it out, or you might puncture the venom sack. Instead, use a smooth hard surface such as a credit card, butter knife or even a long fingernail and gently scrape it over your skin.

Once the stinger is out, wash the area with soap and apply a cool compress or ice pack to the sting site. You can take an antihistamine such as Benadryl to relieve the itching and some of the pain.

And to help keep the sting site from swelling up, elevate the spot where you were stung if it’s possible.

Always, the best thing to do is protect yourself from getting a sting in the first place. Don’t wear bright colors or perfumes outdoors and try to stay respectfully out of the way of anything that has a stinger.