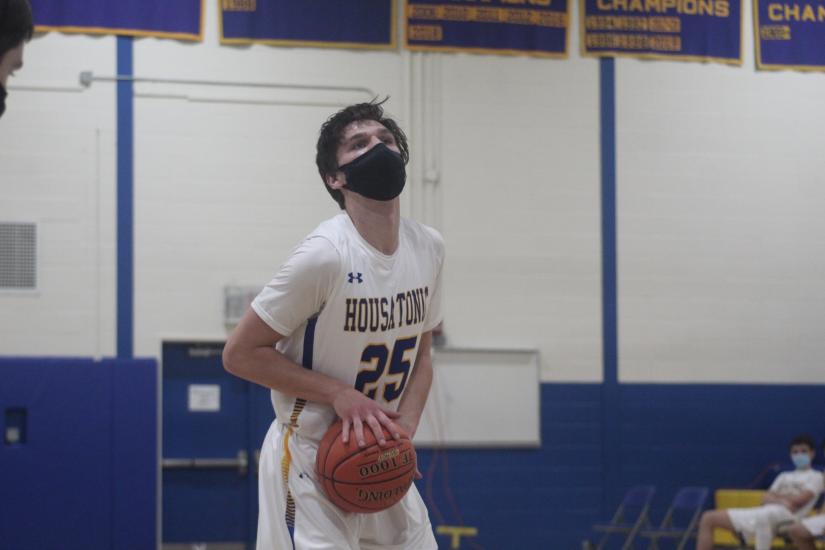 Housatonic forward Harrison Schopp, a junior, took a free throw during a home game against the Nonnewaug Chiefs on Wednesday, Feb. 10. Schopp finished the Mountaineers’ second game of the season with 4 points. Photo by Hunter O. Lyle

Yes, there will be a winter sports season!

FALLS VILLAGE — When the officials blew their whistles during the second quarter of the Housatonic Mountaineers’ matchup against the Nonnewaug Chiefs on Wednesday, Feb. 10, it was not a timeout or a foul that stopped the clock. Instead, it was a soon-to-be-familiar “mask break,” allowing players on both basketball teams to social distance themselves and take off their masks, one of the new COVID-19 protocols under effect for school sports.

As of Tuesday, Jan. 19, sports have returned for the winter season, albeit with a handful of health and safety restrictions. Boys and girls basketball, ice hockey, swimming and Alpine skiing will have a 12-match regular season that is scheduled to end by March 28.

“This is a totally different year,” Housatonic Valley Regional High School (HVRHS)Athletic Director Anne MacNeil said. “The bottom line and the way I’m thinking of the whole season is that this is for the kids and we want to give them the best we can.”

The most visible change is the requirement that the players wear masks, a decision handed down from the National Federation of High School Sports. Like the Mountaineers boys basketball team (who lost their Wednesday, Feb. 10, home game against the Chiefs, 66-to-27), every athlete in every sport is required to wear a mask for the entirety of the contest, with the exception of swimmers when they are in the pool.

MacNeil said scheduling practices has also been a challenge.

Besides Wednesdays, where the high school is closed for cleaning, both basketball teams have kept a somewhat regular practice schedule, meeting five days a week on their own hardwood. Alpine skiing travels to Mohawk Ski Area in Cornwall three days a week for practices.

When it comes to ice hockey and swimming, however, finding a facility to use can be difficult. Typically, the Mountaineers would be able to use the pool and rink at The Hotchkiss School in Lakeville for practice and home meets, but because of COVID-19, the regional high school has had to look elsewhere.

“Hockey in particular has been very challenging, trying to find ice time,” MacNeil said. The hockey team has found a rink in Simsbury for practice on ice once or twice a week. “Swimming has been a challenge, but thanks to the Northwest YMCA, we’ve been able to use the YMCA in North Canaan for practice.”

Similar to the fall season, in which the HVRHS girls soccer team won a second consecutive Berkshire League Championship, there will be no state tournament. Instead, the winter sports will crown a league champion based off first-time matchup records.

MacNeil said if there was an issue with that process — as in cases where a first-time matchup was canceled due to health and safety protocols — then the Berkshire League would hold a bracketed league championship tournament.

While some schools around the league are allowing a limited capacity audience for home games, the Mountaineers’ winter sports will instead be livestreamed via the Housatonic Athletics Facebook page. To find out the schedule, scores and standing, go to www.ciacsports.com or find the link on the athletics page of the HVRHS official website, www.hvrhs.org.

As of Wednesday, Feb. 10, the night of the boys basketball game against Nonnewaug, only the basketball teams had opened their seasons so far. The boys currently hold a 0-2 record, dropping their first game 82-to-51 to the Gilbert Yellowjackets on Monday, Feb. 8. The girls team boasts a record of 1-1, beating the Yellowjackets 54-to-30 while on the road and falling to the Chiefs, 40-20.

According to the official Connecticut Interscholastic Athletic Conference website, the HVRHS hockey team is slated to debut on Saturday, Feb. 13, against TriTown High School. Swimming and diving will open on Friday, Feb. 19, against Shepaug Valley High School.

“Every day is a gift,” MacNeil said in reference to being able to provide a winter sports season. “Whether it’s a practice day, whether it’s a game day. Whatever we can do for these kids is a gift.”