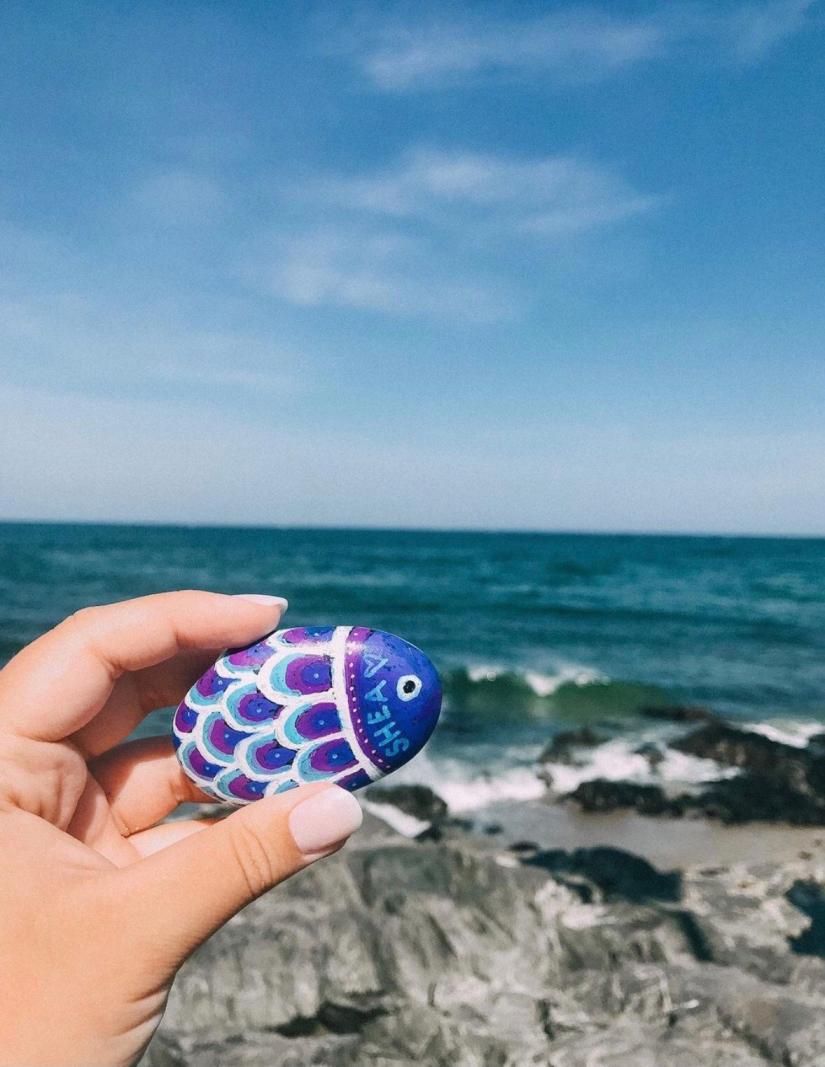 The Cohn family is memorializing  Shea Cohn, who died in a car crash last year at the age of 16, with Shea Stones. Photo submitted

Stones embody spirit of Shea Cohn, and a hope-filled message

FALLS VILLAGE — Shea Stones is a noteworthy project devised by Shea Cohn’s family to memorialize his too-short life and to spread his spirit of adventure out into the world, near and far.

A tragic motor vehicle accident in March 2020 took the life of the 16-year-old Falls Village resident. Those who knew the popular young man and those who only knew of him mourn the loss.

To have known him was to know that Shea collected stones he encountered during his travels. Stones were collected. If they were smooth enough, they were used for skimming. Others were appreciated and carried home as souvenirs of a day’s adventures.

During a conversation on Friday, March 12, Shea Cohn’s family gathered on Zoom. His parents, Denise and Doug in Falls Village, and sisters Emma and Grace shared memories and stories of Shea. Emma was in Salisbury, Md., where she teaches English to students in the 10th grade. Grace, younger of the two sisters, is studying at the University of South Carolina.

“And also shells by the seaside,” Emma added.

“It all started with my mom,” Grace recalled, prompting Denise to explain that she had known of a similar concept created for different circumstances, and remolded the idea. What emerged was the idea of stones to reflect the uniqueness of Shea, his affinity for small rocks, and his love for travel.

The concept is simple.  Shea Stones can be obtained from the designated website, either pre-decorated or the family will provide a kit with a stone and paints you can decorate, as you wish.

Shea Stones are traveling the world

If someone is having a family gathering anywhere, leave a Shea Stone behind, perhaps providing a photo of the stone so that it can be added to the 350 stones and photos already on display.

When someone finds the stone, instructions on the stone indicate that the stone can be taken and left somewhere else as a remembrance of Shea, with a photo taken in the new location, if the person wishes.

In what the Cohns term “moving the spirit along,” there are 250 destination locales where stones have been left in seven different countries around the world. The family indicates that there are many in Falls Village, of course, which counts as one destination.

One of the first stones ever found was one that Grace left at Seabrook Beach in New Hampshire, Shea’s favorite vacation spot. She had lost it into the sandy beach. As it turned out the person who found it was named “Shea.”  That person in turn has placed it somewhere else.

A stone that was placed in Annapolis, Md., made its way to Washington state. Another went on to Guatemala. The stories abound.

Remembering her brother, Emma noted that she was eight years Shea’s elder, so her relationship was more of a mothering overseer.

“He knew how to make things interesting,” Emma said. “His adventurousness challenged us in the best ways.”

She described him as very, very bright and an incredible musician, easily learning and surpassing anything she had to teach him about music.

Closer in age to Shea, with four years between them, Grace said that he was an overall good brother, although they messed with each other as much as they could.

Shea could solve a Rubik’s Cube in 48 seconds, his dad recalled.

“We knew he would be remarkable.” Enjoying a vast circle of friends, Doug said that Shea was bright and curious, and able to converse easily with adults.

“He did his research,” his dad said.

“Shea took the time to hear and understand other points of view,” his mother added, remembering several instances of Shea’s demonstration of innate empathy.

The Cohns are now also involved with the Boston-based New England Donor Services (NEDS), having discovered that Shea had volunteered to be an organ donor, even before he had earned a driver’s license.  As a result, seven recipients have benefited from Shea’s organs and tissue. All seven have received Shea Stones and have placed them somewhere. A Shea Stone now rests by the sign at the NEDS entrance.

To learn more about Shea Stones, go to www.sheacohn.com.