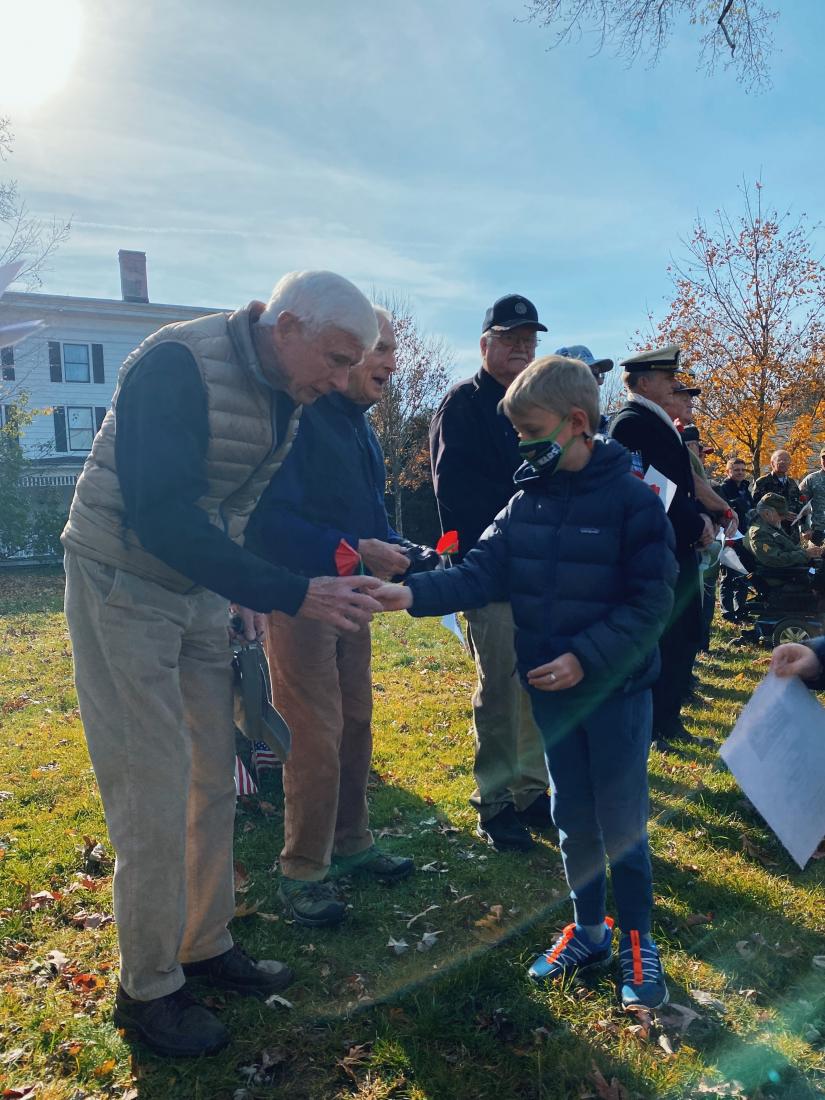 Kellogg student Emmett King, right, was one of the students chosen to present his poppy to the honored Falls Village veterans, including this visiting veteran from Norfolk, Conn. Photo by Alexander Wilburn

FALLS VILLAGE — Homeowners on Main Street in Falls Village needed only glance out their windows on the bright, chilled morning of Thursday, Nov. 11, to see a procession of COVID-masked Lee H. Kellogg School students making their orderly way downtown.

Assembled at the war memorial on the Green in front of the Falls Village Inn, the Kellogg School community gathered in honor of Veterans Day.

Led by Interim Principal Robin Faust, students, teachers and Falls Village residents gathered in appreciation for all who had served, but in particular, the 16 veterans in attendance.

It was during World War I, in 1915, that Canadian soldier and poet John McCrae wrote “In Flanders Fields.” While grieving during the burial of his friend and fellow soldier Alexis Helmer, the poet couldn’t help noting the red flowers that had sprung up around the gravesite in Belgium. He wrote, “In Flanders Fields the poppies blow, between the crosses, row on row.”

Inspired by McCrae’s beautiful but haunting image of loss on the battlefield, the Remembrance Poppy has remained an international symbol of wartime sacrifice for more than 100 years.

During the ceremony, a few young Kellogg students were given the opportunity to present their paper poppies to the military veterans to acknowledge and thank them for their service.

U.S. Navy veteran and Salisbury School teacher Dick Curtis told the children, “This country we have is a wonderful country, and everyone can do something to serve. It doesn’t necessarily have to be the military. By being a good citizen, you can do your part.”