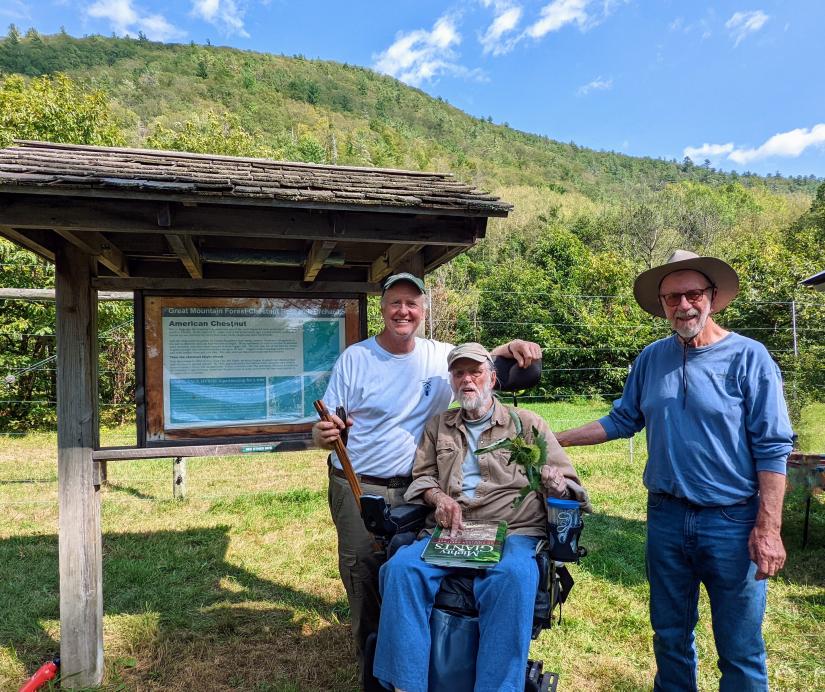 From left, Star Childs, Ellery ‘Woods’ Sinclair and Mark Burdick stood in front of the chestnut orchard in Falls Village on Sunday, Sept. 18. The three have led local efforts to restore the American chestnut to its former glory. Photo by Riley Klein

Hosts Ellery ‘Woods’ Sinclair, Mark Burdick and Star Childs reviewed the history of the decline the American chestnut (Castanea dentata). The tree that once towered over the eastern United States met its demise with the introduction of a parasitic fungus to forests in the 1890s.

Sinclair described the blight of the chestnuts as “the greatest ecological disaster our woodlands have ever faced.”

It is estimated that at the turn of the 20th century, about 4 billion American chestnut trees stood within the eastern forests.

“Original chestnuts were vast and they grew nearly as big as a redwood,” said Sinclair. “[As a child] we had a huge chestnut behind the house. In girth, it was probably about 30 feet.”

The fungus (Chryphonectria parasitica) was first identified at the Brooklyn botanical gardens in 1904. The disease spread rapidly and by 1950 the American chestnut was functionally extinct.

In 2007, these hybrid seeds began to be planted at the orchard in Falls Village by Burdick and his students at Housatonic Valley Regional High School. Burdick estimates 150 chestnut trees stand in the orchard today.

As the trees mature, they are intentionally inoculated with the fungus to test for resistance. Samples of trees that demonstrate survivability are sent to The American Chestnut Foundation for further testing.

Despite these efforts, Childs predicts a long road ahead before seeing the full return of the American chestnut. “It’s going to take a while,” he said.