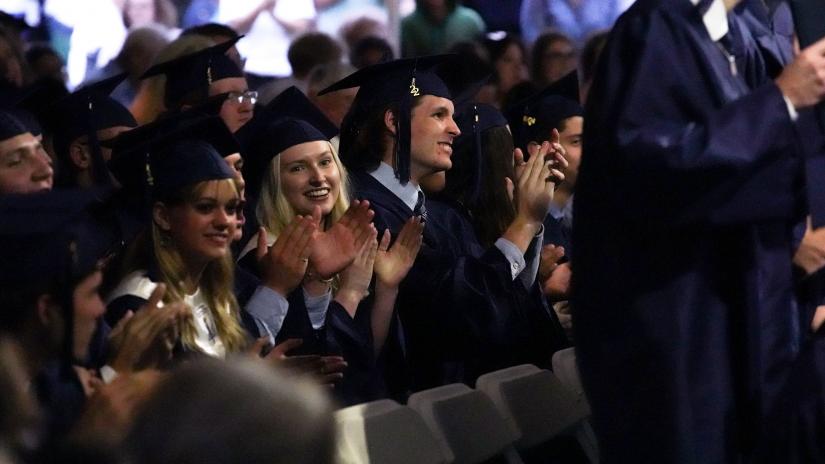 Members of the Class of 2022 at Housatonic Valley Regional High School cheered their classmates during the commencement ceremony on Thursday, June 16. Photo by Hunter O. Lyle

June 22, 2022
By
Patrick L. Sullivan
“We will be the ones to change the world, which is in desperate need of reform.” — Salutatorian Avery Tripp

FALLS VILLAGE — The 90 members of the Class of 2022 heard passionate speeches from their classmates as they celebrated the 83rd commencement at Housatonic Valley Regional High School (HVRHS) on Thursday, June 16.

The ceremony took place under a very large tent on the grass in front of the school. The graduates, faculty and some family members filled the tent and many more spectators brought chairs and watched from outside the tent.

HVRHS Principal Ian Strever noted that the graduates had spent a significant part of their high school years “in a mask, as the COVID-19 pandemic caused disruptions in school procedures.

“Two years of the pandemic could not suppress the indomitable energy of teenagers.”

And presaging what was to follow, Strever praised the graduates for exercising “their First Amendment rights on an unprecedented scale.”

Flatly contradicting the stereotype of her generation as “lazy and phone-addicted,” she said “We will be the ones to change the world, which is in desperate need of reform.”

She described the probable reversal of the Roe v. Wade Supreme Court decision that legalized abortion as “mind-blowing and devastating.”

“We have made far too much progress to regress in such a drastic manner.”

Tripp said if the abortion decision is overturned, that would open the door for restrictions on or abolition of same-sex marriage, interracial marriage and the availability of contraception.

She was equally voluble on the subject of gun control and school shootings.

“Education does not matter if the process of education gets you killed.”

She urged her classmates to “stay angry until the change you want actually occurs.”

Essayist Hayley Considine remembered her ninth grade embarrassment when, after an uneventful first day of high school, she accidentally broke a bottle when getting on the school bus.

She said she was scared that she would be judged and laughed at then, and later, because of her sexual orientation “as a bisexual woman.”

“I will not let the ignorance and hatred of those who know nothing about me bring me down again.”

Guest speaker Michael Baldwin (Class of 2000), clearly a favorite with the graduates, began by mentioning he had just got married the previous weekend. This got a loud cheer.

Baldwin said when he arrived at HVRHS, “I had no idea who I was.

He was also coming to terms with his sexual orientation.

He described “an intense amount of shame and self-loathing. I had a secret that could not be voiced.”

“High school is just the beginning,” he continued. “I didn’t know that I’d marry a man and then tell everyone about it at the Housatonic commencement ceremony!”

“Give yourself permission to ride the voyage of self-discovery,” he urged the graduates. “I failed Life Skills, and years later was asked to be the graduation speaker — so anything really is possible!”

Valedictorian Josie Marks said her class grew up “sheltered by the privilege and safety of the Northwest Corner.”

She said it is her generation’s turn “to combat our country’s hypocrisy as it claims to stand for equal protection under the law.”

Among the things she vowed to fight for was abortion rights, saying abortion had never been an issue until white male doctors and the Catholic Church made it so.

She issued a “rallying cry,” saying the “liberties of all minorities are at stake.”

“As a woman and a member of the LGBTQ community, I am petrified.”

She urged her classmates not to be indifferent to such issues.

“Instead of moving on, take action.”