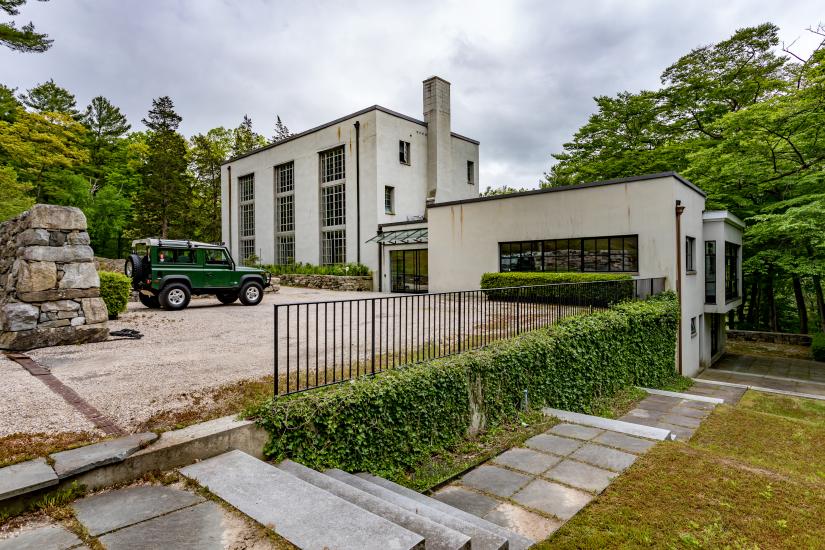 FALLS VILLAGE — Winterhouse, one of the oldest modernist homes on the East Coast, has been named to a new statewide website, Creative Places (www.connecticutcreativeplaces.org).

The website, recently launched by Preservation Connecticut with assistance from the State Historic Preservation Office, has mapped out places across the state that are significant in the creation of 20th-century visual art and literature. Several sites in the Northwest Corner are also featured.

Researchers collected data on more than 450 artists and writers and pinpointed their associated places “where arts and letters flourished in 20th Century Connecticut.”

In the case of Winterhouse, a sprawling, mid-century modernist house and studio situated on more than 90 acres in Falls Village, former owners with myriad artistic talents have literally put the place on the map.

The stucco, Bauhaus-style home, perched atop a hill set back from Undermountain Road, was built in 1932 for the renowned American muralist Ezra Winter, who lived and worked there until his death in 1949. Then known as Juniper Hill, the property became the home and studio in the early 1950s of Dorothy Lathrop, a noted children’s book illustrator and her sister, Gertrude, a sculptor.

For many years, Winterhouse, as it later became known, was occupied by William Drenttel, who created the original design for Spy magazine. He and his wife, Jessica Helfand, operated Winterhouse Studio, a design consultancy firm, at the site where they also established their own publishing company, Winterhouse Editions, focusing on literature, design and cultural criticism.

“This is the ultimate home office,” said Graham Klemm of Klemm Real estate, who is the listing broker for the 6,600 square foot residence, now on the market for $3,950,000. Klemm marveled at how history has a way of repeating itself. Back in the early 1930s the single-family home was built specifically with a work space and residence in mind. Fast forward to today and more than ever due to the pandemic, properties that blend home and work are a hot commodity, he said. “This is where the world is going.”

Factor in that the home is among the earliest modernist houses on the East Coast, said Klemm, and it becomes even more of a rarity.

“I think mid-century modern houses have a real following and are highly coveted in this area.” Klemm is also the listing broker for another modernist house in Ancram, N.Y., which he said is the only residence in the country designed by Ai Weiwei +HHF Architects and carries an asking price of $5.25 million. Klemm not only sells modernist homes, he also lives in one. “I tend to gravitate toward modern houses,” he noted.

According to the Creative Places website, Connecticut, with its proximity to the cultural hub of New York City and its quieter suburban and rural landscape, was fertile ground for artists and writers in the period of modernist movements between 1913 and 1979. “Creative Places seeks to show how place played a significant role in creative work, and how in turn the artists and writers influenced communities in Connecticut,” according to the website.