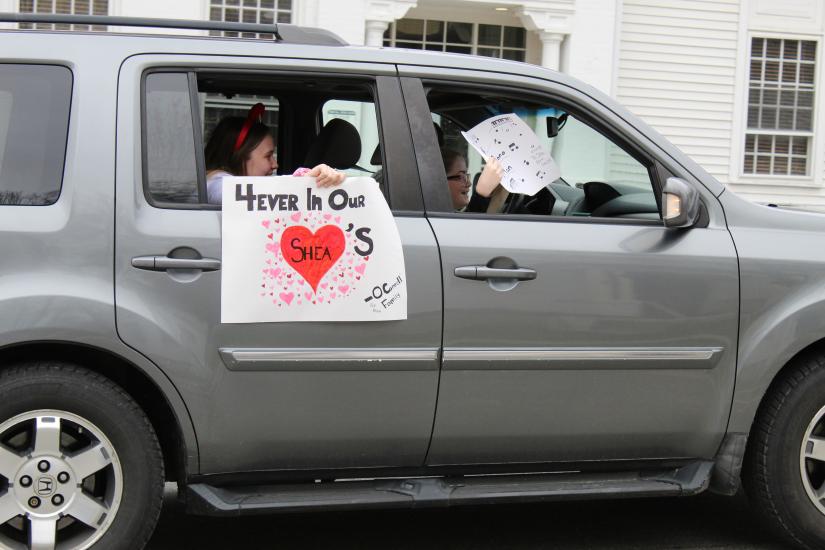 Vehicles drove through the center of Falls Village on Saturday, April 4, with homemade signs honoring the memory of Shea Cohn, 16, who died following a car crash on March 27. Photo  by Patrick L. Sullivan

In memory of Shea Cohn, a motor vehicle memorial

FALLS VILLAGE —More than 300 vehicles, most containing at least two people, turned out to show their support for the Cohn family in Falls Village on Saturday morning, April 4.

The parade was in honor of 16-year-old Shea Cohn, who died at Connecticut Children’s Medical Center in Hartford on Sunday, March 29, following a motor-vehicle crash in North Canaan on Friday, March 27.

Many of the vehicles were carrying signs with messages for the family, who were sitting in front of the Falls Village Children’s Theater on Main Street. Parents Doug and Denise Cohn were flanked by their daughters, Emma and Grace.

The cars, pickups and vans filled the parking lot at Housatonic Valley Regional High School, covered the length of Warren Turnpike, and were backed up to Route 7.

The parade took about half an hour, from Greg Riley’s van coming into view, to the rear, brought up by the Hodgkins family, who had organized the parade.

The memorial parade was meant to show support for the Cohn family at a time when traditional memorial services can’t be held because of the recommendation that no social gatherings be held during the COVID-19 quarantine.