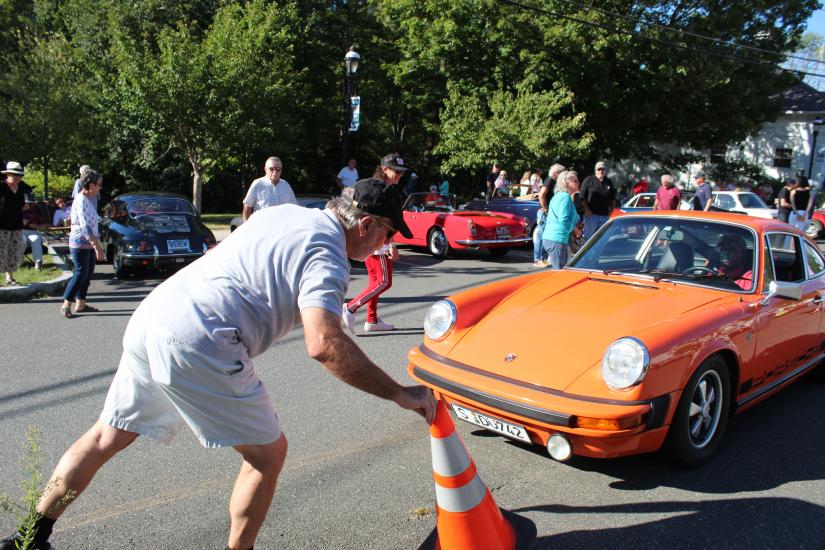 Willie Hallihan moved a traffic cone to accommodate a driver on Thursday, Sept. 1,  after the vintage racecar and sports car parade. Photo by Patrick L. Sullivan

FALLS VILLAGE — At about a quarter to five on the afternoon of Thursday, Sept. 1, a couple hundred people in downtown Falls Village were all set for the arrival of a parade of vintage race cars and sports cars.

Spectators were staking out their spots as early as 2:30 p.m.

There were people in folding chairs. People on the steps in front of the Falls Village Cafe. People wandering around on the Green, many holding plastic cups of beer.

The town constables were ready for the parade to come down Main Street.

The Wanda Houston Band was warmed up and armed with a set list heavy on songs with an automotive theme (i.e. “Route 66,” “Pink Cadillac”).

And finally the cars arrived, led by a pace car from Lime Rock Park and preceded by a sustained and powerful sound best spelled as “VROOM.”

The vintage car parade started at the track at 4 p.m. and wound through Lakeville and Salisbury before arriving in Falls Village. The parade and subsequent festivities marked the start of Lime Rock Park’s Historic Weekend event.

Depending on who was asked, there were about 125 cars in the parade. (Three broke down en route, about par for the course.)

“I say this every year,” Barber said. “But this is a nice group of cars.”

Constable Lou Timolat gave directions up by the Center on Main. Willie Hallihan adroitly moved a traffic cone out of the way for a young fellow in an orange Porsche.

And Suzanne Cadgene, deploying a homemade arrow sign, helped out with the parking directions at the junction of Main and Railroad Street.  She was assisted in this endeavor by her dog, Lily.

And by 5:05 p.m.,the engine roar had died down, the smoke had cleared, and everyone could hear the band heading down Route 66 through Kingman, Barstow and San Bernardino.