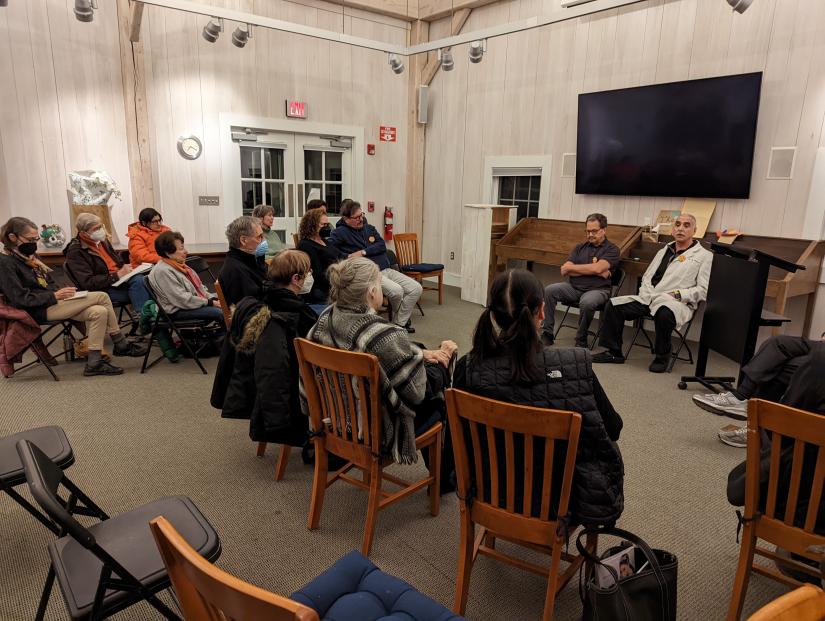 Save Sharon Hospital’s Dr. Howard Mortman, an obstetrician, spoke at a roundtable discussion on Thursday, Nov. 17 at the Cornwall Library. Photo by Riley Klein

CORNWALL — The future of the Labor and Delivery Unit at Sharon Hospital hangs in the balance as the Dec. 6 public hearing with the Office of Health Strategy (OHS) approaches.

On Thursday, Nov. 17, Save Sharon Hospital (SSH) held a roundtable at the Cornwall Library to update the public on the matter. The event drew 16 residents to hear from SSH speakers including Dr. Edward Kavle, pediatrician, and Dr. Howard Mortman, obstetrician.

“Once it’s gone, we won’t be able to get it back,” said Kavle. “We need to stand up at this December 6th hearing to keep this service.”

The OHS hearing will determine whether Nuvance Health is permitted to end labor and maternity services at Sharon Hospital. If the state sides with SSH, Nuvance must keep the unit open until April of 2024 and uphold its previous commitment.

“If OHS says they can close it down then that’s the end,” said Kavle.

The speakers encouraged members of the public to submit written letters of support.

“We have received 376 letters from the public at last count,” said Cornwall Selectwoman Janet Carlson.

“Our community does not have other options for maternity,” said Mortman. “I don’t want to know what happens when you have a mother with complications that needs an ambulance ride to another hospital.”

To attend the Zoom meeting on Dec. 6, use the following info:

The next SSH roundtables before the hearing will be held Tuesday, Nov. 22, at Geer Village in North Canaan at 6:30 p.m. and at Troutbeck in Amenia Thursday, Dec. 1 at 5 p.m.