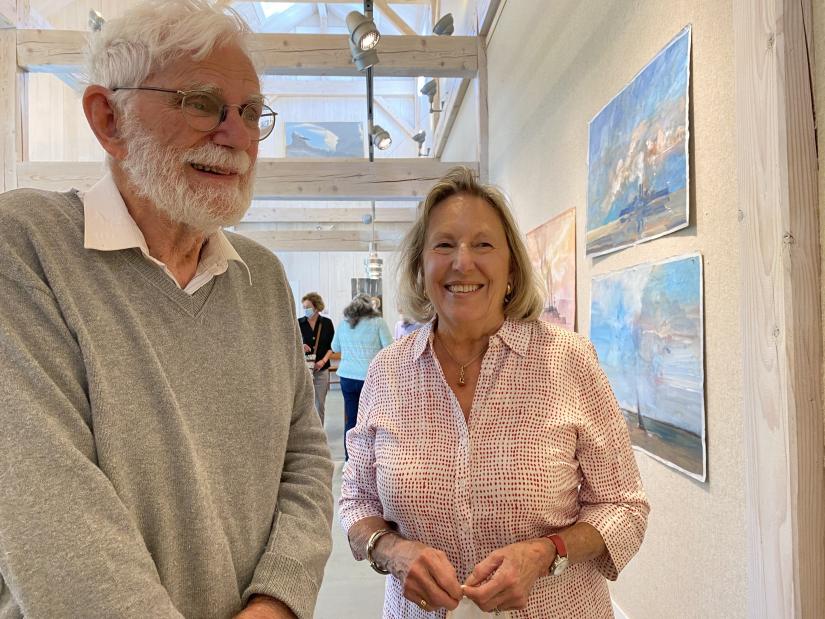 Artist Robert Parker welcomed guests at a June 12 reception for his current exhibit at the Cornwall Library, “Works on Paper.”  Curator Anne Coffin, at right, assembled and hung the exhibit. Photo by Leila Hawken

CORNWALL — While an exhibit of the works of local artists is always a draw at the Cornwall Library, the current show is noteworthy for a few reasons.

First, the brilliant works of Robert Parker are on display, a must-see for any student of art or a lovely encounter for the more casual viewer.

But, a further joy is that the library chose a Parker exhibit to be the first public art showing since the library’s reopening of its doors to the post-pandemic community.

An appropriately spaced opening reception was held on Saturday, June 12, welcoming the community to meet the artist and just enjoy gathering together. Appreciation for the event was palpable and sales were brisk.

The show’s signature piece is a watercolor, “SMS Babenberg, 1976,” painted in that year, but there is much more to see.

In a conversation on Wednesday, June 9, Parker said that the period to be covered by the exhibit largely spans the 1980s to the present, mostly watercolors of ships and waters he has known.

“They are things I have always liked to paint,” he observed.

Speaking of his childhood when he was about 12 years of age, Parker recalled that his family was living in Seattle, Wash., and spent countless family hours sailing on the Pacific.

In the 1940s, before the U.S. entered the war, Parker remembered that he and his family were invited to their neighbors’ home for a picnic with the entire crew of the HMS Warspite, a ship that was docked in nearby Bremerton for repairs.

“It was a jolly day in Seattle,” he declared. “That ship, the Warspite, has remained on my mind ever since.”

He recalled hearing that the ship had seen action off the coast of Spain, and he has always wondered about the safety of the crew he had come to know.

Parker’s homage to the War spite is captured in watercolor and included in the exhibit.

Absorbing the notion of the honor of being the first artist chosen for a post-pandemic exhibit, he said that he hopes it does not happen again — the pandemic, that is, not the exhibit.

“I’m looking forward to it,” he said of the exhibit. “They always do a good job of hanging things. They look good,” he said, crediting the library staff’s skill at the art of hanging an exhibit.

Credited with that fine job of hanging the show, Curator Anne Coffin said that she had planned this exhibit to be held last year, but the pandemic struck, and the show was consistently postponed until it became possible this month. As a result, this became the library’s first post-pandemic event to be held.

The exhibit contains a varied collection of watercolors and sketches of ships and planes and even bi-planes, landscapes, some portraits and sketch books imagined and set to paper in watercolor and ink. There is plenty of whimsy in subject matter with broad geographic diversity. Parker’s works are found among the collections of the world’s great destination art museums, and also happily now at the Cornwall Library for a limited engagement.

The Parker exhibit, “Works on Paper,” will remain on display until July 24, during the library’s open hours.