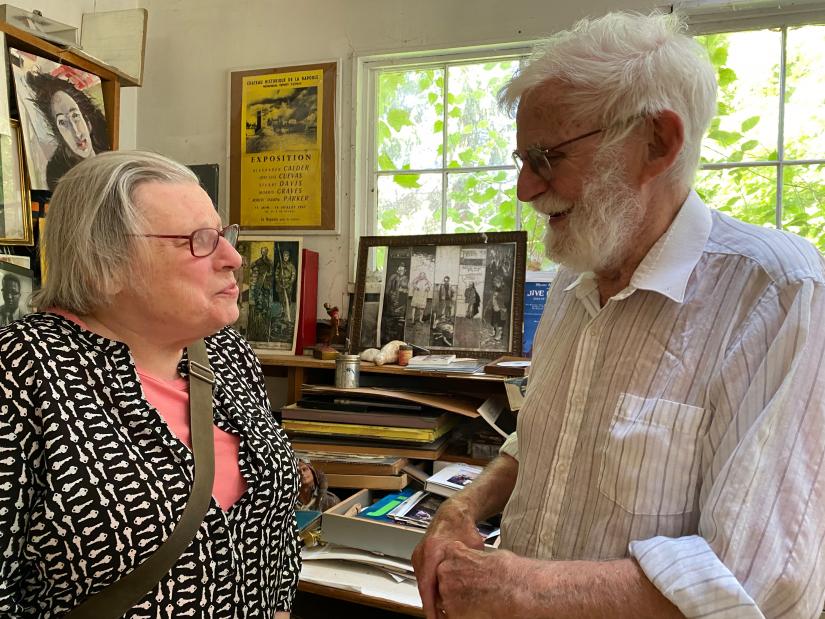 Artist Robert Parker spoke with Catherine Noren of Cornwall during the annual Open Studio Day on Saturday, Sept. 3, a day of art and conversation. Photo by Leila Hawken

CORNWALL — In a town replete with artistic accomplishment, artists, painters, potters and poets, the Annual Open Studio Day is a summer opportunity not to be missed.

A steady stream of visitors on Saturday, Sept. 3 took advantage of their chance to visit their choice of 12 working studios. Not only was there art to see and some to purchase, the anecdotes and banter were fun, too.

Robert Parker engaged in just such banter with Catherine Noren of Cornwall, who was skilled with the return volley. He has been a part-time musician, well known to area fans of jazz history in part because of his established WHDD radio program. He is a successful percussionist as are three of his sons.

“I just like to stand around,” he commented about his participation in his open studio.

Sally Van Doren’s studio was open in the center of West Cornwall and she spoke about why she was drawn to artistic expression.

“Why art? I’m interested in art as a visual language,” she said. Van Doren is a poet with three poetry books published and a national poetry award in hand. She explained that journaling of more than 12,000 pages demonstrates the core of her exploration of connection between writing and drawing.

“I enjoy being part of the art world in Cornwall,” Van Doren said. She is currently anticipating an exhibit of her works in a show at the Cornwall Library next year.

The Open Studio summer event was created 15 years ago by sculptor David Colbert who has participated each year. Visitors were invited to take the five-minute self-guided tour to view Colbert’s metal sculptures placed strategically along the way.

“We have extraordinary rocks adding their sculptural form for endless inspiration,” Colbert said.

Having the property’s Pyramid studio exhibit space on the grounds to himself for the first time ever, Colbert was enjoying the moment. He usually shares the space with his wife, Ellen Moon, also an artist. He explained her absence was due to her creating a new exhibit of her work to be galleried at The Hotchkiss School, opening soon.

He said that the pandemic has brought new artists to the area. “I love the idea that I’m surrounded by artists and the influx of new young artists,” he said. “I’m delighted to meet them; I’d love to see more,” he added.

“For me,” Colbert said, “it’s worth doing the Open Studio to have a great excuse to figure out what I want to show.”

Studio artist Richard Griggs was dismantling outdated hard drive components to incorporate into his creative assortment of mobiles. He was doing this between visitors. Griggs hails from a long line of generational talent, indicating that to create a mobile, the artist needs to be something of an engineer in creating a finished, balanced piece.

“As long as it’s balanced, it’s done,” Griggs said. He still finds the parts for his whimsically imaginative and varied mobiles at the town’s Swap Shop within the transfer station.

There was the next thing to a traffic jam on the narrow road that passes Tim Prentice’s barn studio, with visitors awaiting their turn.

Cornwall Bridge potter Susan Fox of Milkhouse Pottery had joined the conversation. To the age-old question of how she knows when a pottery piece is done, she said, “I’ll just decide.”

Prentice added an account of having met a roadside potter during his travels in India. Using the crudest, most primitive equipment, this potter was making clay teacups with handles at a rate that Prentice timed at one every two minutes. These were serviceable cups used for drinking tea in the local tea shop but with the social stature of today’s paper cups, meant to be single-use and discarded by smashing to the ground.

Intrigued by the roadside potter, Prentice sought to know more about the potter’s talent, asking whether for payment, the potter might want to produce a more beautiful teacup. In short, the potter’s response was “no.” The work began and ended in those two-minute teacups without any higher aspiration.

Prentice’s open studio invited such conversation surrounded by a wondrous array of mobiles, as did the other open studios each with their own offerings. The annual event presented an opportunity to delve into the genuine openness of Cornwall’s community of notable artists.