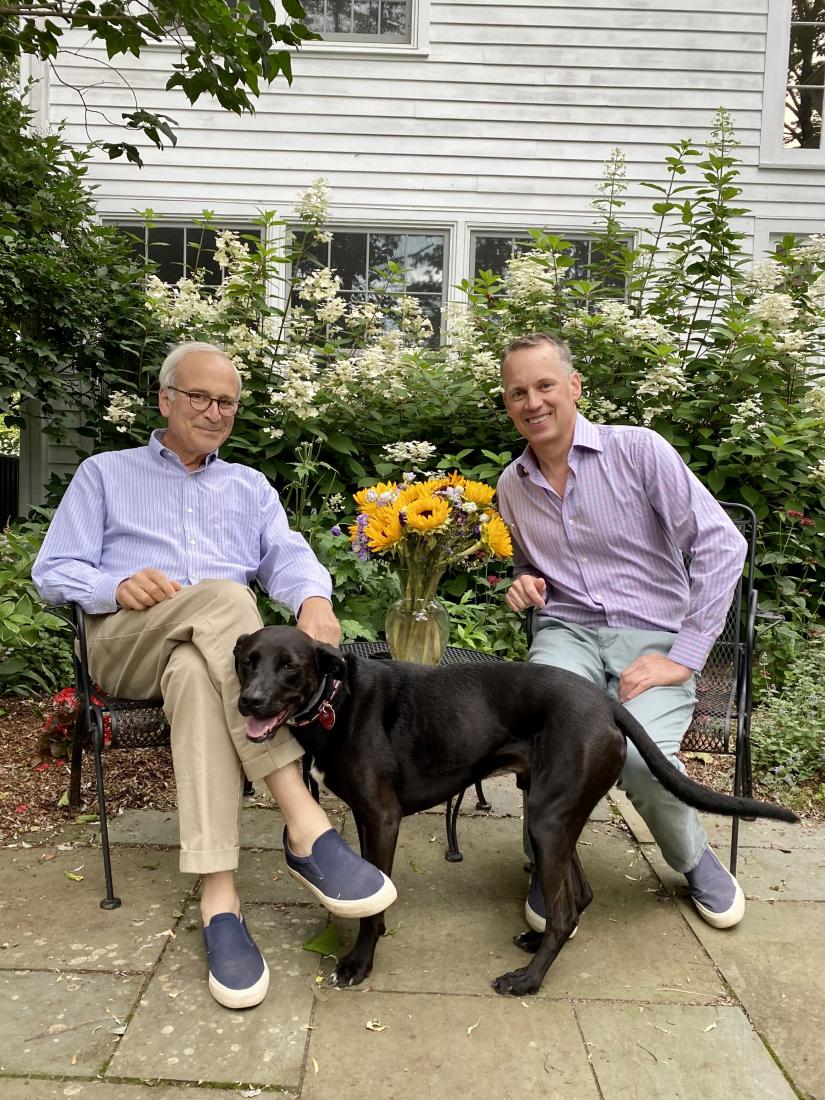 Richard Schlesinger, at left in photo, was saved by neighbors and volunteers following a cardiac emergency. He is recovering now in Cornwall with his partner, John Guenther, at right in photo; and Cyrus, in center, and Gus, who is not in the photo. Photo submitted

A life saved by caring volunteers, neighbors and good fortune

August 4, 2021
By
Leila Hawken
“The beauty of this experience is that these people gave up their time to give me back my life.”

What followed was a confluence of seemingly coincidental events, all contributing like clockwork to an outcome with a nicely recuperating patient and gratitude to an exceptional community.

A conversation with Cornwall’s EMS Captain Elizabeth Ridgway on Thursday, July 29, provided details of the heroic life-preserving efforts of volunteers and medical experts who responded to the scene. Although she was not on scene herself, she assembled the reports of those who were.

Schlesinger had been walking along Cogswell Road near the bridge, three-quarters of a mile from home. He was near the end of his walk that morning.

In what his doctors now assume was within a couple of minutes after his collapse, a motoring couple came along and rushed into action. Fortunately, the woman (who was found and identified on Monday, Aug. 2) knew CPR. Drawing upon her training, she began chest compressions while her husband dialed 911. That there was a cell phone signal at that spot was an added gift.

Within one minute, State Trooper First Class Roy Dungan from Troop B in North Canaan, who was near Cornwall Consolidated School at the time, responded and  initiated rescue breathing using a bag valve mask.

Soon, more trained personnel were on the scene, including Schlesinger’s neighbor Ian Ridgway, who had completed Emergency Medical Technician training earlier in the year. He took over the chest compressions.

Joyce Hart, who is one of the select trained personnel who happened to have a defibrillator kit in her car, arrived on scene. By EMS policy in Cornwall, such kits are deployed in Volunteer Fire Department members’ vehicles as part of their jump kits, to provide quick response from scattered locations. Schlesinger’s doctors were amazed that someone happened to have the device handy.

Using Hart’s kit, the Cornwall Ambulance crew collaborated to shock Schlesinger’s heart twice, once as the ambulance arrived, and then again.

The ambulance had its LUCAS machine on board to begin mechanical compressions. It was an extremely hot day, Captain Ridgway recalled of the working conditions.

LUCAS is a state-of-the-art machine purchased just a year ago with fire department funds at an investment of about $15,000, Ridgway noted. Having a LUCAS is not mandated, so not every department has one, she added.

For the first time at that point, a pulse was detected, according to Ridgway.

The important task of notifying Schlesinger’s partner, John Guenther, who was en route to Cape Cod, fell to Dave Williamson, a neighbor and long-term member of the Volunteer Fire Department. Ridgway said that Williamson willingly volunteered for the task, bringing to it his friendship and compassionate nature.

Meanwhile, according to Ridgway, the Northern Dutchess paramedics arrived on scene. Although they are based in Millerton, they were returning from another assignment in Goshen, not far away. They were qualified to administer advanced life support, including connecting an IV line and dosing stabilizing medications.

A LifeStar helicopter had been summoned. The Cornwall Ambulance sped Schlesinger to Sharon to meet the helicopter at Sharon Hospital’s landing pad for the flight to Hartford Hospital for emergency treatment and, ultimately, quadruple-bypass surgery.

The extraordinary power of community

Having persuasively agitated for early release from Hartford Hospital, Schlesinger was up for a conversation on Monday, July 26, eager to express his appreciation to emergency personnel and the Cornwall community at large.

“The beauty of this experience is that these people gave up their time to give me back my life,” Schlesinger said. He admits he slept through the whole episode. He said that he knows that there were 12 people helping on the scene, all of whom he knew.

“The rescue people in Cornwall are more than amazing,” he said. “I wave to the Cornwall people every day, and all of a sudden, they are saving my life. It redefines neighborliness.”

“I love Cornwall,” he said, and he meant it.

Schlesinger noted with deep gratitude that this was happening on a Saturday morning when all of these people probably had other things to do on their day off, but still they kept on.

“I am not giving up,” one man was heard by the crowd to say as he continued his compressions.  No one can identify that person, but Ridgway said it defined the intensity of the effort.

“They refused to give up,” Schlesinger said, returning to that thought throughout the conversation. “They worked on me.”  And they had a LUCAS machine, he marveled.

One mystery persisted until this week for Schlesinger: He did not know the identity of the Cogswell Road motorists who came along first.

And then on Monday, August 2, he spoke with the woman who saved his life by performing CPR on him. He had asked the State Police for her identity; the trooper phoned her to get her permission, which she gave.

Her name is Elizabeth Jakobsen and her husband is Siguard Knippenberg. They were visiting Kent Falls from Maryland and had read that Cornwall has a covered bridge, so they drove up Route 7 to see it. A child in the car with them wanted to go swimming. They determined that there is a town beach in Cornwall; Google directed them to take Cogswell Road to the beach.

Although Jakobsen had been trained in CPR, she had never used it. This was her first time using CPR for real.

Schlesinger said that what strikes him is the randomness of the most direct route to the Cornwall town beach, and all of this led to saving his life.

“These people are heroes,” he said.

With the episode behind him, Schlesinger said that he is pleased to be at home, propped up on pillows. He said it still hurts to laugh, so all jokes about his situation will need to wait.

The doctors in Hartford told him to expect to feel like he had been hit by a truck, twice. He said that he now feels as if he has been run over by a truck — but only once.

Schlesinger’s current regimen calls for a required walk outdoors three times a day. During such walks, neighbors might come out to applaud — and with good reason.

“The community saved him and the community has continued to support us, and that’s enabled us to get through this,” Guenther added. “We are filled with enormous gratitude.”

There is more positive reaction to the incident. Locally offered CPR classes are attracting unprecedented interest.

Ridgway said the currently scheduled sessions are filled to capacity. Training is scheduled for Aug. 5 and 12 and a third date is being determined.

For information or to register for future CPR training sessions, email Ridgway at emscaptaincornwall@gmail.com.

“We prepare for the worst but hope for the best,” Ridgway said, crediting poet Maya Angelou for the EMS motto. In this case, the worst happened and so did the best. “We are so pleased that our hundreds of hours of training paid off in such an important way.”