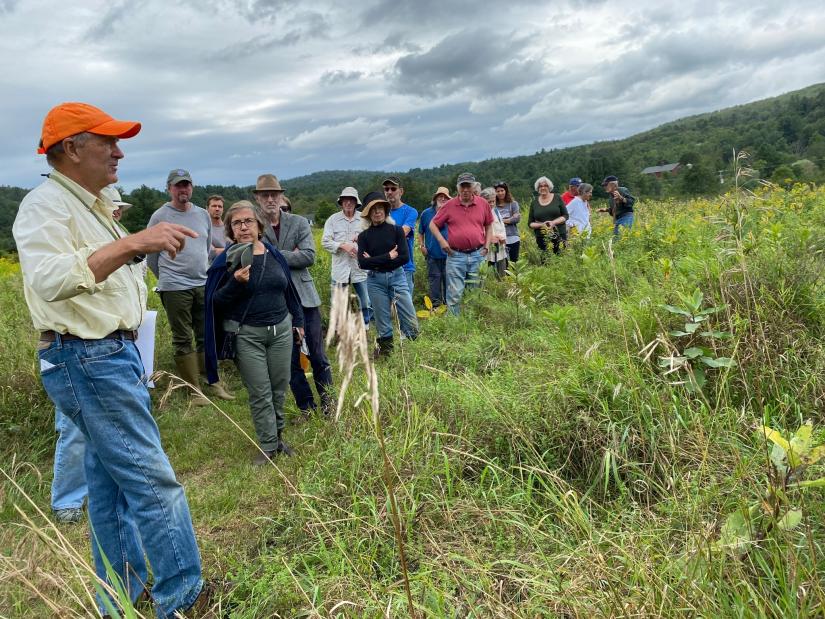 President of the Cornwall Conservation Trust Bart Jones shared the value of the Furnace Brook Preserve during a meadow tour on Saturday, Aug. 28. Photo by Leila Hawken

Learning about the wild things within a thriving meadow

CORNWALL — The diversity of plant life in an undisturbed meadow came under scrutiny during a talk-hike along a nicely mown path through the meadow at Furnace Brook Preserve on Saturday, Aug. 28.

Sponsored by the Cornwall Conservation Trust, the event drew nearly 30 participants to hear botanist Peter del Tredici detail the likely ecological history of the meadow including its origins, how certain plant species happened to be there, how to control the undesirables and what good things may be happening.

Presenting the larger view of the place of the preserve, part of a 107-acre tract, among the holdings of the Cornwall Conservation Trust was Bart Jones, president of the sponsoring organization.

“A meadow is the result of human activity,” del Tredici said. “It is not natural.” The vegetation exhibits a different kind of ecology, he added.

A former senior research scientist at the Arnold Arboretum in Boston for 35 years and a lecturer at Harvard’s Graduate School of Design, del Tredici is a part-time resident of Cornwall. His new book, “Wild Urban Plants of the Northeast: A Field Guide,” serves as a resource for locally thriving plants in any natural setting, rural or urban.

“This is my third walk to explore the town’s properties and reveal their natural history,” del Tredici said.

How to manage a meadow

To start, del Tredici pointed to the visible hilly surrounds to the meadow, just off Route 4, particularly a stand of white pines beyond the meadow where a 19th-century pasture would have stood within stone walls still evident in the now-forested area. Clumps of barberry are also thriving in that setting.

When the pasture was abandoned, the pine trees grew well and so did the barberry.

“The plants are screaming their history to me,” he said.

Bart Jones provided perspective on how the Furnace Brook Preserve fits in to link with other Conservation Trust properties in Cornwall, particularly providing a link through a trail-marked connector to the nearby Mohawk Trail.

Pointing to fine details within the meadow, del Tredici said that native and non-native plants are blending to form a hybrid community of plants in great variety.

“The future is hybrids as they come together to form new communities,” del Tredici said.

The invasives are able to handle climate change, del Tredici noted, so eradication is not an answer, but control is.

Multiflora rose was introduced in the late 1870s by the Arnold Arboretum, he admitted.

“It seemed good at the time,” he said. It was very attractive for use as hedgerows and its widespread sale and distribution continued through to the 1950s. Barberry, too.

Frederick Olmsted introduced Japanese knotweed into Central Park in New York City before it was known to be problematic, and the rest is ecological history.

“I’m in favor of letting plants duke it out,” del Tredici said. “Rather than planting things, I simply edit out what I have — edit, rather than design.”

Del Tredici recommends a weed whacker as a good tool for selective editing.

While it is not possible to turn back the clock, and as the world is embracing a globalized economy, in the same way, the future is one of globalized ecology, del Tredici noted.

Milkweed plants contain a toxic substance that would cause a human heart to stop beating, but by eating the leaves, the monarch butterflies become poisonous to their natural enemies.  Milkweed is toxic to cattle, so cattle know to leave it for the monarchs to feast upon.

How nature can cooperate

Invasive species, especially Japanese Bittersweet, but others too, were on the minds of many participants.

By narrowing your target plants to just a single species, you will readily identify them and deal with them, before moving on to the next.