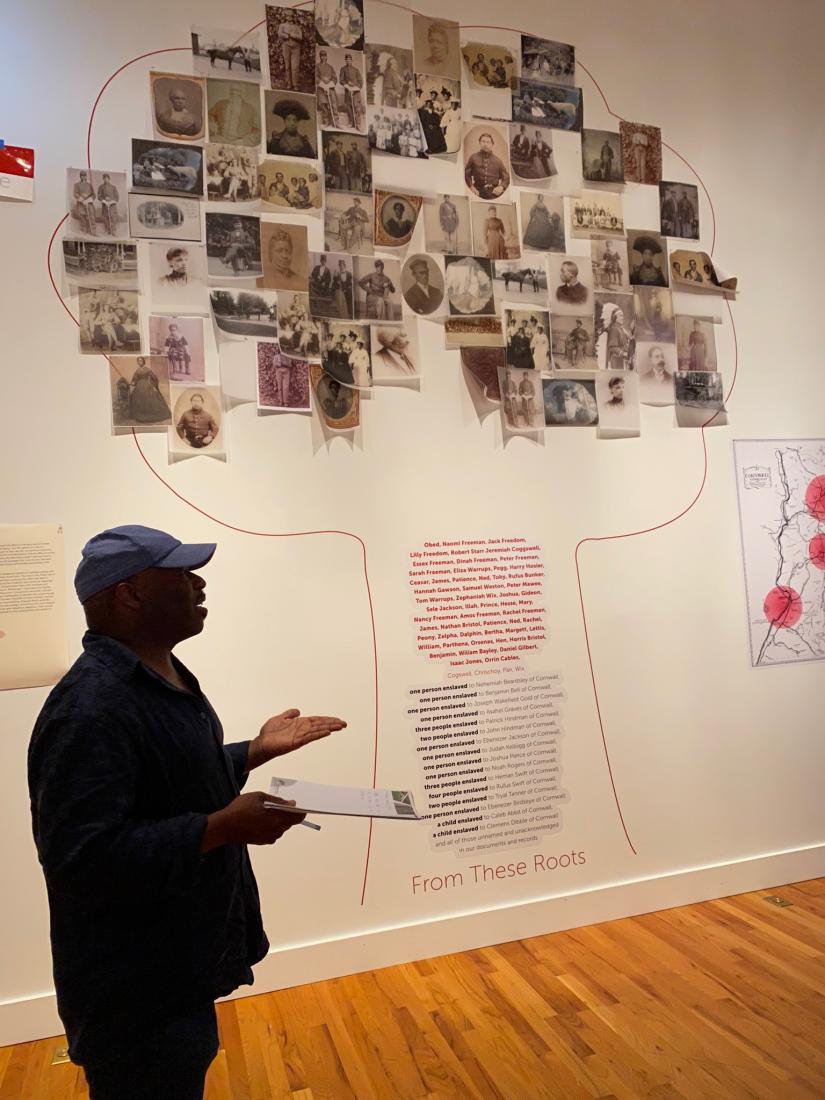 CORNWALL — Years in the research and planning, the summer exhibit at the Cornwall Historical Society compellingly charts the stories of multiple African-American and Indigenous families who lived productive 19th-century lives within the town’s picturesque borders. But their histories were written on porous paper, having all but disappeared from the notice of historians.

“Finding Freeman|s: Wisdom for Contemporary Cornwall from Its 19th-century Black and Indigenous Neighbors” is the title of the exhibit that is the work of residents Ann Schillinger and Ryan Bachman. They began with archeological exploration of a local tract that had been owned by Cornwall’s last enslaved African-American resident, Naomi Freeman, who had gained her freedom. She bought the property for her family in 1828 that included her freed husband who used the name Obadiah and their daughter, Sarah.

Exhaustive historical research into the Freeman family led to finding other African-American individuals and families as well as indigenous residents who called Cornwall home in the era that included the time of the local Foreign Mission School.

The project drew the interest of Connecticut Humanities (CTH) that provided funding and whose representatives co-curated to present the researched information in a way that would provide the historical perspective and inform today’s Cornwall residents about how that past history melds with present-day Cornwall.

“We called Frank and he was interested in working with us,” said local historical society Curator Suzanne Fateh, as she welcomed visitors to a preview showing on Wednesday, June 22. Co-curator Frank Mitchell of CTH detailed the exhibit along with team partner Lucianne Lavin, Director of Research and Collections of the Institute for American Indian Studies in Washington, Connecticut.

Mitchell noted that he has been coming to Cornwall since he was a graduate student. “It’s been great to get to know the town and its history,” he added.

“There is a lot of fluidity in the relationships among the African-American residents and the indigenous residents in the work of building identity,” Mitchell said of the challenge of developing a life as a freed person, no longer enslaved, but also not a citizen.

Enslaved people were gradually becoming emancipated in the years following the Revolutionary War, as early as 1805, Mitchell noted, but having never lived independently, were often unsure of how to proceed. Their first step would likely lead them to a boarding house where people in similar circumstances found shelter. The Cornwall exhibit shows a multi-generational narrative of ascent, using the Freeman family story as a starting point.

“For some reason, we today are separated from these stories,” Mitchell said. Beginning in the 19th-century, stories of the indigenous and formerly enslaved families were being deleted from the historical narrative.

The indigenous people gradually moved away from town. The quest for citizenship and abolition of slavery dominated the public conscience.

“Now that we know this, how do we move forward,” Mitchell asked on behalf of the exhibit that suggests the inquiry. The people of that time wrestled with some of the same pressures of modern times, particularly faced by immigrants. They can’t stay; they can’t work. People were gaining their freedom, but they were unable to vote and there was no real plan to change that.

Until its closing date of October 15, the exhibit will be open on Saturdays from 10 a.m. to 3 p.m., and on Wednesdays from 1 to 4 p.m. Admission is free, but donations are welcome. For more information, go to: cornwallhistoricalsociety.org.