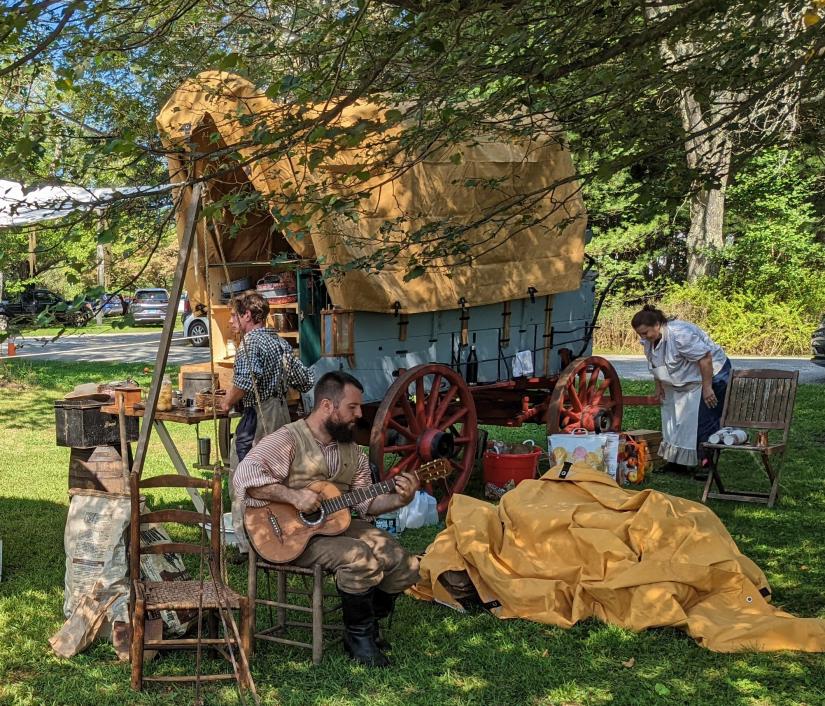 The Frontier Mess, a group that recreates lifestyles from the 18th and 19th centuries, demonstrated cooking techniques and equipment used on the trail as they roasted a lamb chuck at the Cornwall Agricultural Fair on Saturday, Sept. 10. Photo by Riley Klein

All age groups found things to look at and do and neighbors to greet. The children delighted in this year’s improved hay bale feature that offered a maze for the first time, rather than a stack.

Speaking of the hay bale maze, Henry Hermann-Botto, 5, proclaimed, “I love it.” Pressed for additional comment, he said, “I like it even more this year,” suggesting that he had visited the fair in years past.

The event was sponsored by the Cornwall Agricultural Advisory Commission and chaired by Bill Dinneen and Wendy Kennedy. Advisory commission members were actively engaged with all aspects of event details throughout the day.

Recently bathed farm animals with agreeable personalities included cows and llamas, a petting area, and dogs from The Little Guild seeking homes.  Live demonstrations included log sawing, an authentic 19th-century cooking demonstration and antique machinery, all in working order. There was spinning of wool from sheep and alpacas. Local organizations set up tables to let people know what they do in town.

“I just gave them a bath,” said Kennedy, noting that children who show them at 4-H dairy shows help with the grooming.

Two llamas made the trip from Country Quilt Farm, one named Harley with years of fair experience under his 9-year-old belt, and the other a relative newcomer named Rio. About their reputation for spitting, farm owner Debbie Labbe explained that there is a pecking order among llamas at feeding time. “They don’t spit at people; they spit at each other,” she said.

Summing the fair up in one word, Cornwall resident Rick Wolkowitz called it “fantastic,” based on his 10 years of experience attending the fair.

Schlesinger recommended a taste of the blue-ribbon apple pie baked by his friend Chet Kraweski, who had been serious about his pie effort. He had even engaged in practice sessions to perfect the crust.

“We’re happy for him,” Schlesinger added.

Offering a tour of the Taghhannuck Grange’s elaborate exhibit, Barbara Prindle described a new program this year that will offer a scholarship of $750 to fund the cost of certification training for an EMT volunteer. Often new recruits find the cost prohibitive. Applications will be available through the Grange.

Artfully spinning sheep’s wool with a practiced hand was Town Clerk Vera Dineen. “Once you get the hang of it, it’s pretty easy,” she said. In the next booth, Fiona Ocain of Clover Hill Alpacas was spinning alpaca, explaining that alpaca is a bit more difficult to spin than sheep’s wool because alpaca fibers are more slippery.

Popcorn was being popped on site and sold by the grade 8 class, which has been raising funds since kindergarten for their class trip. They are thinking of Philadelphia, Boston or Washington, D.C.

The recent improvement of extending electricity to serve the town Green brought a new feature to the fair in the form of movie night, inviting attendees to bring a picnic supper to the Green and enjoy a showing of “Charlotte’s Web.”  Scheduled to make a guest pig appearance was Wilbur, courtesy of Maple Hill Farm.