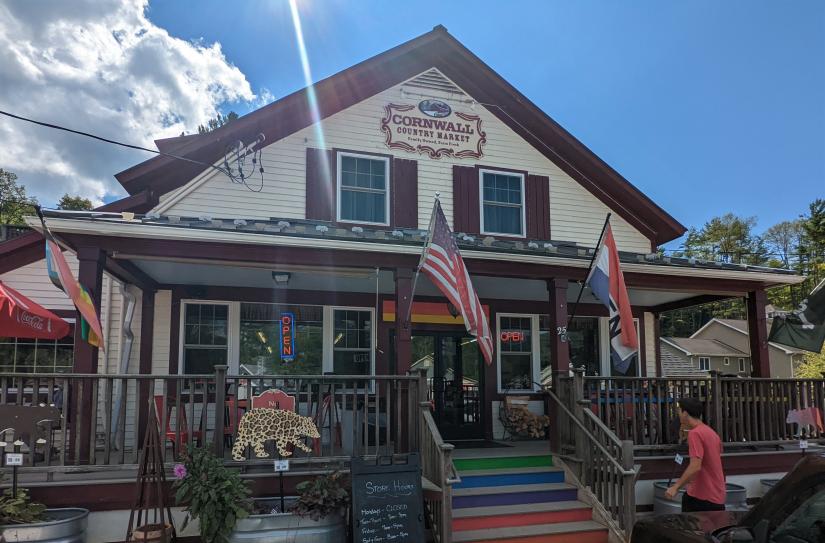 The Cornwall Country Market in Cornwall Bridge, which dates to 1835, will be changing hands once again. Photo by Riley Klein

CORNWALL BRIDGE — After guiding the well-being of the Cornwall Country Market and its community for more than a decade, owners Idella and James Shepard have decided to sell the historic landmark business.

They are now working toward a gradual move west to Oregon in order to be closer to Idella’s mother, who is in progressing need of family assistance. While the store is on the market, they have worked out an alternating schedule between the two states.

Commenting on their plans this week, James Shepard said that the store will remain open for the foreseeable future.

Idella Shepard’s mother resides in Boring, Ore., a city of more than 7,000 people located 14 miles from Portland in the foothills of the Cascade Mountains.

The Shepards plan to  move to this town named for William Boring, a Union soldier who came to the region from Illinois as a homesteader after the Civil War, raised a family and prospered.

Today, Boring is a destination for vacationers. The picturesque community is not without a sense of humor, as they have linked themselves to a sister community named Dull, Scotland. And an Australian town named “Bland.”

Boring town features include a bagpipe festival, alpaca farms and, for the young people, an annual “Goth” river rafting event, all in black (including the inner tubes) with appropriate Goth face make-up.

As for the popular Country Market alongside Route 7 in Cornwall Bridge, Shepard noted that the store’s future will rest with a new owner as will the current arrangement whereby Harold MacMillan’s Housatonic River Outfitters maintains a small department within the store.

Reflecting on the past 10 years, Shepard said that he and Idella have enjoyed experiencing young families who came into the store. They watched the children of those families grow, and now those same children are entering the fourth grade.

“Little kids who used to be super-shy peering over the counter, are now such mature giants, and they come back now and think we don’t remember when they were afraid to order by themselves,” he said.

Shepard spoke of the challenge of bidding good-bye to so many people in the community.

“I can see their faces and think of their names, people like Gus Haller and Kenny Strobel who had been coming to the market for 60-70 years. Every year there would be another face missing from the old breakfast club,” Shepard said.

The Cornwall Country Market’s own history began in 1835 in Cornwall Bridge when it was H.W. Breen’s General Merchandise. It may have changed names at the hand of new owners over time, but surprisingly not that many times before it came to be owned by the Shepards.

New owners will come along, but the store’s connection to the community and the dedication of Idella and James Shepard will remain a treasured legacy.