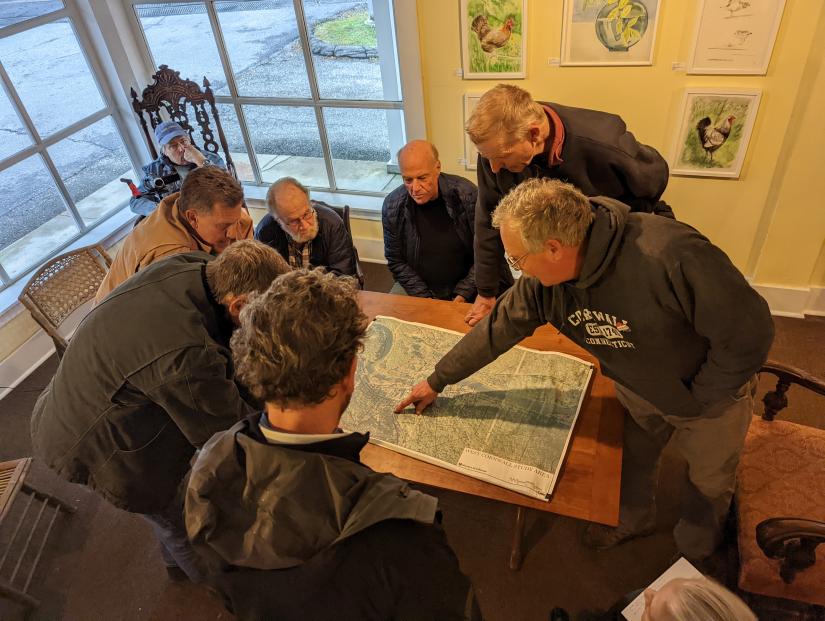 Cornwall’s waste water committee met at The Local in West Cornwall on Wednesday, Nov. 16 before touring a potential site for location of a treatment plant. Photo by Riley Klein

WEST CORNWALL — The wastewater project’s construction committee gathered at The Local in West Cornwall on Wednesday, Nov. 16 to evaluate and tour potential sites for a plant.

Prior to the meeting First Selectman Gordon Ridgway and Project Engineer Steve McDonnell met with federal Department of Housing and Urban Development (HUD) officials to learn more about the $3,000,000 grant that will be used to partly fund the project.

“As soon as we accept that grant, our project has been federalized,” said Ridgway. “[HUD] has requirements to receive that money. It doesn’t come just in an envelope.”

Per the National Environmental Policy Act, there must be a study of the site to evaluate environmental factors, such as flood hazards or soil contamination. Additionally, the Tribal Historic Preservation Office must be consulted to confirm the land is of no concern to indigenous people.

“In order to do the environmental review, they need to know the site,” said McDonnell.

With this in mind, the committee took to the map to examine potential properties. Factors taken into consideration included elevation, distance to the river, current and previous uses for plots, and affordability.

“The one we are looking at as a primary site is not occupied. The property owner is very willing to talk to the town about it,” said McDonnell.

The fifteen attendees of the meeting then walked up the hill and across the street to the plot of land between the post office and 3 Guys Ski & Ride.

“It’s tight, but it does seem to have enough space,” said McDonnell.

The proposed treatment plant would be housed within an approximately 20’ by 30’ building tucked to the rear of the property. The committee then came to a consensus on the plot and agreed to move forward.

“This is not the final decision, but we have to start,” said Ridgway.

Ridgway and McDonnell have another meeting planned with HUD for Nov. 17 to discuss next steps for moving forward with the environmental review.