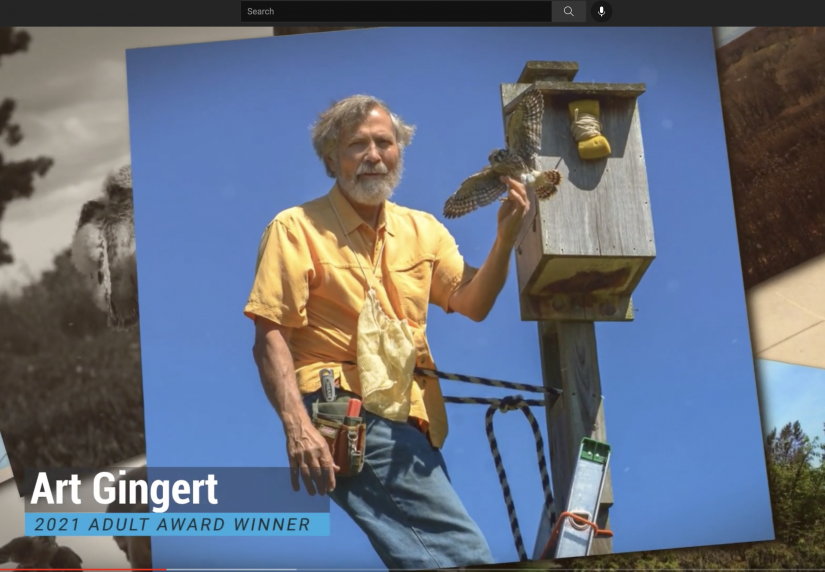 Art Gingert of West Cornwall has been honored for his efforts to protect the rare American Kestrel. Image from Aquarion

Award for Art Gingert will help protect a rare bird

CORNWALL — There is yet another bird for bird watchers to watch for and, thanks to a Cornwall resident, watchers are now more likely to spot the American Kestrel. West Cornwall resident Art Gingert has created custom nesting boxes and installed them throughout the region — and has earned an annual award from Aquarion Water Company for his work.

Gingert was recognized by the water company as a 2021 Environmental Champion in the Adult Class. Gingert, in turn, selected the Cornwall Conservation Trust (CCT)to receive and administer the $2,500 award that comes with the honor.

Beginning in 1977 in Sharon and Lakeville, Gingert has installed numerous special nesting boxes for the Kestrels throughout Litchfield County and north central Connecticut.

A recent count indicated more than 85 such boxes installed in more than 30 towns. His box design is recognized by experts as the “gold standard” for the species.

The American Kestrel is a small, colorful bird in the falcon class, described as similar in size to a Mourning Dove.

Faced with a shrinking natural habitat, its numbers have dwindled.

Causes cited are reductions in agricultural land, reforestation of that land, residual pesticides, and development in general.

The bird prefers a habitat in short grasses, meadows and undisturbed open land.

“Helping these award funds support Art Gingert’s work with American Kestrels represents a small but vital and tangible part of that larger mission.”

Gingert is an arborist and volunteer conservationist. He spends much time outdoors, where he has developed talents in photographing nature and leading expeditions through Canada and Alaska. He has served as managing biologist for the Audubon Center in Sharon and its Miles Wildlife Sanctuary.