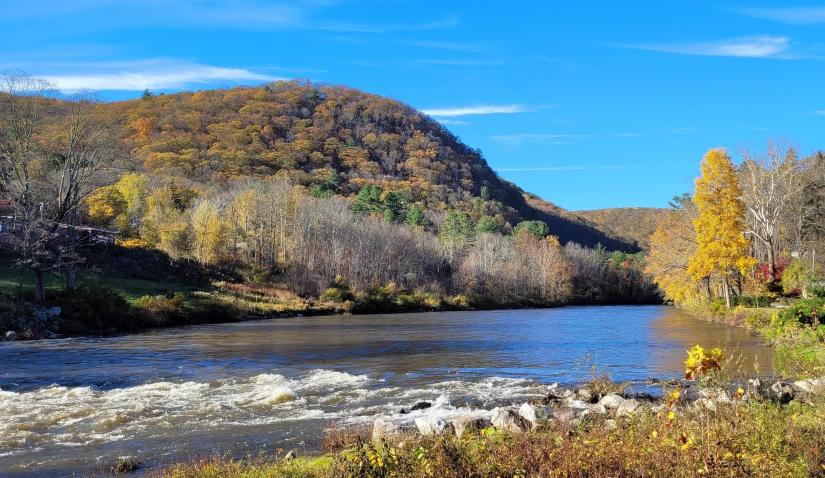 The Housatonic River, seen here just upstream of the Covered bridge between Sharon and West Cornwall, may soon enjoy “Wild and Scenic” status. Photo by Debra A. Aleksinas

CORNWALL — Referred to as a “national treasure” by the Connecticut Department of Energy & Environmental Protection (DEEP), a 41-mile stretch of the Housatonic River may finally get its due in 2022 if it is designated as a Partnership Wild and Scenic River.

The Housatonic River’s bid for the Wild and Scenic designation has weathered several decades, administrations, iterations and a global pandemic. But this time, say those who have built the case for protecting the river and keeping the movement afloat, the Wild and Scenic status is within reach.

“We have the backing of the state and every town,” along the stretch, said William Tingley of Sharon, who is chairman of the Housatonic River Commission (HRC), in an interview in early March. “It’s been one long push and we are now running into the end zone.”

The commission was established in the late 1970s as a regional planning board responsible for monitoring and advising Northwest Corner towns on issues involving the river.

What it means to be ‘Wild and Scenic’

The intent of the National Wild and Scenic River System is to protect outstanding rivers from harmful effects of new federal projects such as dams and hydroelectric facilities. In order for a river to achieve the designation it must be free flowing and have at least one outstanding natural, cultural or recreational resource value, such as fisheries and wildlife, exceptional scenery, cultural resources or water quality.

A river’s designation into the national Wild and Scenic System ensures protection of river resources and comes with federal funding to support conservation efforts.

A Partnership Wild and Scenic River, which is the designation proposed for the Housatonic, is a subset of rivers in which collaboration between local governments, watershed groups, the National Park Service (NPS) and other stakeholder groups allows local communities to protect their own river and river-related resources.

River advocates said the status can also benefit individual towns through management plans and studies required to qualify for consideration and increases the likelihood of support funding and matching grants.

A push from Congressional delegates

In mid-February, U.S. Sen. Chris Murphy (D-Conn.) and U.S. Rep. Jahana Hayes (D-5) visited Kent, one of the seven towns situated along the 41-mile segment of the river from the Massachusetts border to Boardman Bridge in New Milford.

Only four rivers in Connecticut have achieved the federal status: the Lower Farmington River and Salmon Brook, the West Branch of the Farmington River, the Eightmile River Watershed in Haddam and the Pawcatuck River Systems in Stonington.

As of early March, the Housatonic River legislation was “being reviewed internally by the U.S. National Park Service,” said Liz Lacy, community planner and river manager for that organization. Should NPS approve the application, it faces one final hurdle in Washington, D.C.

“It depends on how long it takes Congress to bring it up and decide on it,” said the NPS official, who also assisted the Farmington River group. Could 2022 be the year the Housatonic earns its designation? “It’s definitely a possibility,” she said.

A look back: decades of challenges

In order to appreciate the latest legislative push and the efforts that have brought the Wild and Scenic designation within reach of the Housatonic, one must look back on the challenges, and the vast, collaborative effort among the veteran river advocates.

Tingley recalled a period in the late 1970s when the National Park Service paid its first visit to the Housatonic to consider it for possible inclusion in the Wild and Scenic System. “At that time the Act itself was not particularly user-friendly,” he said. Five years earlier, advocates across the nation successfully built the case for protecting rivers and the Wild and Scenic River Act became law.

The Housatonic’s original proposal focused on a stretch of river from the Massachusetts border to the Shepaug dam, said Lynn Werner, executive director of the Housatonic Valley Association (HVA). “The federal Wild and Scenic Act dealt well with rivers where there were a lot of federal land holdings already, but not so well in New England,” where private property dotted the rivers.

While the NPS found the section of the Housatonic to be worthy of Wild and Scenic designation, the federal program lacked answers for landowners concerned about federal overreach, recalled Werner.

“It was fertile ground for people to be afraid” about losing control of their property to the government. “So the attempt established on our river and Massachusetts kind of went down at the time,” she said.

From 1978, HVA and the river commission worked in tandem to keep the river designation afloat and educate the public on what it means: that it is a tool in the toolbox of protection; and what it doesn’t mean: that the measure would allow federal control over the Housatonic and that it is an anti-energy project.

Then came turbulent times. The 1980s brought years of distractions and delays, including a failed plan by Iroquois Pipeline to cross the Housatonic River in three places and proposed construction of a “Super 7” freeway project impacting Route 7 in New Milford.

But about a decade ago, she said, the quest for Wild and Scenic status was back on the front burner.

‘It can’t take care of itself’

There are two routes to designation, one through Congress and the other through the state. Congressional designation leads to federal funding, but the Housatonic River Commission backed the state application first time around to avoid federal strings attached to the funding.

Werner said river advocates at that were mainly concerned about protecting the Housatonic against major threats. Then, more delays: “The federal administration changed, COVID hit and our section of the river was inundated with people. Access blew up. People were coming here from all over.”

Housatonic River access sites that traditionally served a few intrepid fishermen, she said, were flooded with visitors. “It quickly became clear that a river corridor was a valuable asset that serves the recreational needs of different interests,” said the HVA official.

Overuse without adequate oversight and infrastructure, said river advocates, is a threat to its health. “This river is a public resource and that means that you have to take responsibility for it,” noted Werner. “It can’t take care of itself.”

‘A different tack’ this time

Fast forward to February 2022, and an updated direction and application brought forth by HVA and HRC, with the blessing of its coordinating committee which includes two representatives from each of the seven communities,  NPS, DEEP, HVA, FirstLight Power Resources and the Northwest Hills Council of Governments.

“I reached out to our partners across the state, and we switched our approach and proceeded with a partnership design” via the Congressional route, said Werner, who invited lawmakers Murphy and Hayes to speak at the recent Kent forum. “We felt we would have more resources and more direct help from the National Park Service, and that maybe we should explore that option.”

Gov. Ned Lamont has endorsed the river group’s revised approach. “Although initially proposed to the Department of the Interior in 2016 by then Governor Dannel Malloy as a state administered Wild and Scenic River under Section 2(a)(ii) of the Wild and Scenic Rivers Act, river circumstances have changed and I believe that congressional designation as a Partnership Wild and Scenic River is the best approach for Housatonic River management and protection.”

Werner said the designation will be an economic driver for local businesses and that decisions affecting the river, and disbursement of federal funding, will be made “100 percent locally by the towns and whoever wants to be at the table.”

It was time to “get the ball rolling again,” he said. “Once we had been made aware of how much the river could benefit” from Congressional backing and additional funding “we changed our tack, with support from the state, and we are now on track to be nominated by our federal elected officials. There is zero downside and a huge amount of upside.”

Tingley expressed confidence that with the added layer of protection from the federal status, the Housatonic River will be protected for future generations.

“We’ve come a long way. People aren’t throwing refrigerators and sofas over the banks anymore. I think the river being Wild and Scenic will give people a lot of pride, and it gives the river its proper due.”