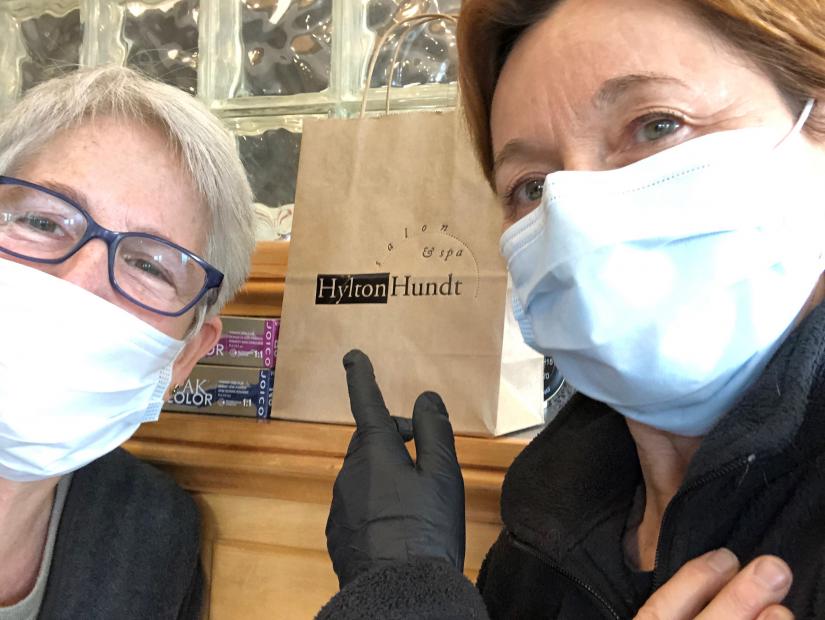 Janice Hylton, at left in photo, and Bonnie Hundt of the Hylton Hundt Salon in Millerton, N.Y., shared tips on hair coloring and styling in a COVID world. Selfie photo by Bonnie Hundt and Janice Hylton

Your Hair: Just Don’t Touch It …

Desperate times lead to desperate women doing things in desperation to their hair.

For some women, such as those who have long hair and those who don’t color their hair because it’s gray, these times are not quite as desperate.

But a large percentage of our Tri-state region female (and perhaps male) population has:

• gray hair that needs to be colored at least every six weeks and maybe even more often.

Many of my friends seem to have hit the hair styling wall in the past few days. They are emailing me with notes that say, “I got my hair color kit today. Now I have to figure out how to use it.”

I don’t want to keep using the word “desperate,” but feel free to insert it as often as you like in this article. It is the emotion that underlies every sentence.

As we know, however, we don’t always make our best decisions when we are in an altered emotional state. If you can stand it, you should wait.

“If your hair dresser gave you a good cut last time, then don’t touch it.”

That’s the advice of stylists Janice Hylton and Bonnie Hundt of the Hylton Hundt Salon in Millerton, N.Y. Use styling gels, a blow dryer and other tools to tame your longer hair.

And if you just can’t stand it …

“I love doing remedial work,” Hylton sighed. “And there’s going to be plenty of it when the time comes.”

If you must tinker with the good look that your stylist gave you (a month or more ago), Hylton and Hundt have some tips and warnings.

First, if you trim your hair, cut half as much as you think you need to cut. Cut it when it’s wet. And don’t pull the hair, just let it hang. Hair stretches if you pull on it; after you cut it,  it will bounce back — and be much shorter than you thought it was when you were working on it.

“Be sure to sit still while you’re getting trimmed,” Hundt said. “Keep your shoulders in the same position.”

And the implicit warning embedded in there: Don’t try to cut your own hair, at least ask a friend to do it.

It’s easiest to use short sharp scissors, although Hylton conceded with a sigh that “most people are going to use whatever they have at hand.”

Perhaps just trimming your bangs will make you feel better, Hundt suggested. Again, the implicit notion in there is that your bangs will grow back and you can’t make too much of a mess out of them.

But even so: Hylton advises that you not trim your bangs straight across.

“Hold the scissors straight up and down and then kind of chip in to the bottom edge with your scissors. Figure out the angle and length you want — and then do less than that.”

The two stylists couldn’t recommend a retail coloring product because they don’t use them and are therefore unfamiliar with them.

But they did specify that you should use one marked as “natural color.”

“Not ‘warm’ and certainly not red, unless you’re a redhead, and not ash,” Hylton said.

Choose a color that’s lighter than the color you think you need.

“It’s easier for a hairdresser to remedy color that’s a little too light rather than a little too dark,” Hylton said. It won’t completely cover the gray, but it will make it less obvious.

If you’re only touching up your gray roots, Hundt said, then only apply color to the roots and definitely don’t apply new color on top of the old color or you can create a stripe-y look.

Hylton and Hundt have been preparing coloring kits for their clients, with detailed instructions, helpful accessories and an applicator brush. The cost is $50 and there is curbside pickup at their shop at 199 Route 44, near the Salisbury, Conn., border.

So far, 17 clients have tried the kit and all 17 have been happy with the results.

For women (and men) who are not Hylton Hundt clients, “they can ask their colorist to either give their formula to them or send it to us and we can translate it,” Hylton said.

To contact Hylton and Hundt about getting a color kit, send an email to hyltonhundtsalon@gmail or send a text to 518-789-9390.