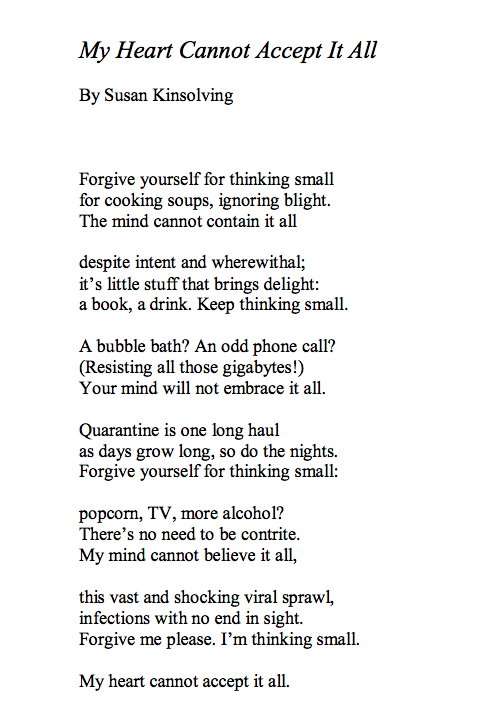 From “Together in a Sudden Strangeness: America’s Poets Respond to the Pandemic,” edited by Alice Quinn, Knopf, 2020

Poets Find Words for What We Are Feeling Now

Sometimes you ask a question that seems simple enough and you are surprised by a response that comes at you big and powerful like a tsunami wave.

That’s more or less what happened when Millerton, N.Y., resident Alice Quinn checked in with the many poets in her contacts list and asked them what they’re doing during the pandemic. The response was, Quinn said, overwhelming.

She quickly realized that America’s poets had something to say that American poetry fans would like to hear. She reached out to her contacts at the prestigious Knopf publishing house (where she was an editor for a decade, before going to The New Yorker and then the Poetry Society of America) and they immediately said yes.

In what must be one of the fastest turnarounds in publishing history, “Together in a Sudden Strangeness: America’s Poets Respond to the Pandemic” was put together in 40 days, like the Biblical flood, beginning March 27. An electronic version will be available on June 9, a hardcover print edition will be released in November.

The poems are collected from all over the United States, with work from poets that even prose fans will recognize, including Susan Minot and former U.S. Poet Laureate Billy Collins.

Susan Kinsolving, who is poet in residence at The Hotchkiss School in Lake­ville, Conn., is featured in the book . She will be one of five poets to take part in a special Zoom reading, sponsored by the Hotchkiss Library of Sharon, Conn.

The reading will be held on Tuesday, June 16, from 7 to 8 p.m. Quinn will host Kinsolving, Collins (who was poet laureate from 2001-03), Major Jackson, Didi Jackson and Fanny Howe.

Hotchkiss Library Executive Director Gretchen Hachmeister said this one-time-only event is free, but donations are encouraged to benefit both Sharon Hospital’s fund for healthcare workers and the Hotchkiss Library of Sharon, which is the town’s own public library.

Online attendance space is limited to 100; for more information, go to the library website at www.hotchkisslibrary.org.