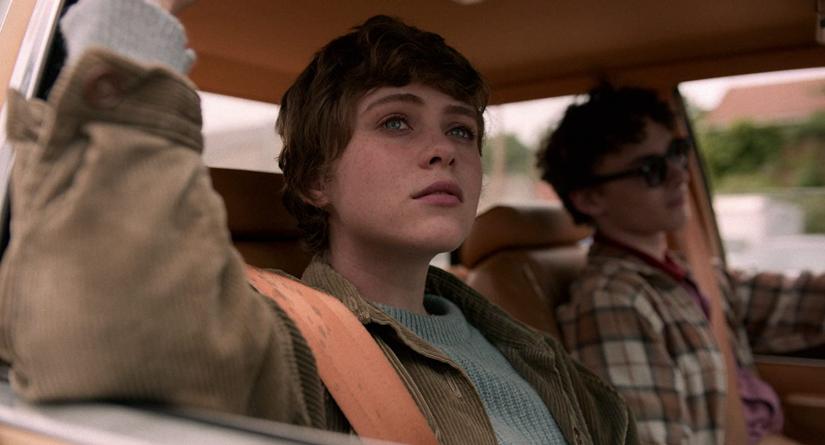 Sophia Lillis stars in the Netflix series “I Am Not Okay with This.” Photo courtesy of Netflix

A Little Horror To Brighten Up Your COVID-19 Crisis

Let’s face it, this is a terrifying time: We are living in quarantine and trying to avoid infection from a potentially fatal disease.

Counter-intuitively, this might be the perfect time to check out two horror offerings from Netflix.

Some psychologists believe that watching horror can soothe viewers. There are many theories as to why, but one seems to be that watching terrifying events onscreen assures us that we’re not alone, and helps us to externalize our inner fears.

‘You’ brings horror and love

“You,” a series now being offered exclusively on Netflix is … well, it’s  a romantic tale about a serial killer.

Actor Penn Badgley plays Joe Goldberg, who finds a new woman to obsess over each season and woe to anyone who gets in they way of his romantic pursuits. Think of it as “Dexter” meets “The Philadelphia Story.”

Joe is a New York bookstore owner who we come to sympathize with thanks to flashbacks to his childhood traumas and his own interior monologues. It also helps that his victims are pretty loathsome.

And, frankly, his unconditional commitment to the objects of his affection is endearing.

As you might expect, these are not traditional love stories — although critics of the show have said Joe is a traditionally manipulative narcissist and that the series is just a Bluebeard tale of cruelty and misogyny updated for the 21st century.

I think it’s better than that, with layers of complexity added in alongside references to film classics (notably “The Philadelphia Story” — a clip from the film is even added in to one episode in season two).

So where’s the horror? Well, try this. In season two, Joe is on the run from a revenge-seeking ex-girlfriend named Candace. He takes on a new identity that leads him to L.A., where he kidnaps a man named Will Bettelheim and assumes his identity. (Implausibly, Will is kept alive in a glass cage in a storage unit.)

Trouble is, the real Will owes some bad men a lot of money.Complications ensue. Joe does good things (such as defending his neighbor’s increasingly imperiled young sister). He  falls in love with a chef/heiress named Love Quinn (played with star-making intensity by Victoria Pedretti from “The Haunting of Hill House”). There is a pinky-chopping Mafioso. The gore factor rises, with appendages being taken hostage and body parts being fed through a meat grinder.

‘I Am Not Okay with This’

One thing that sets her apart from her high school peers: She is learning to destroy and kill with her mind.

“I Am Not Okay with This” is a “Carrie”-like drama released in late February on Netflix. It is based on a 2018 graphic novel by Charles Forsman (who was the creator of “The End of the F***ing World,” which was also made into a television series).

Syd (played by Sophia Lillis) is a self-described “boring, 17-year-old white girl” who is in love with her best friend, Dina (Sofia Bryant). Unfortunately, Dina is dating golden boy Bradley Lewis (Richard Ellis). Eccentric neighbor Stanley Barber (Wyatt Oleff) is enlisted both as a heterosexual foil to match Dina’s dating and later as a hapless but charming mentor to Syd and the budding superpowers she has to learn to control.

Syd’s telekinesis is connected with rage and desire. There is also a mysterious presence that follows Syd, and that fades into black mist when anyone tries to look at it.

The producers of the Netflix hit “Stranger Things” were on board in the creation of this series, which will interest comic book fans with its superhero origin story; and which will appeal to film fans through rich cinematic moments that borrow from  teen classics such as “Pretty in Pink,” “Heathers,” “The Breakfast Club” and, of course, “Carrie.”

The narrative is compelling; the characters are well-developed and are played with strength, energy and commitment by the show’s young actors. The series also serves as a mini-reunion between Lillis and Oleff, who appeared in the horror films “It” and “It Chapter Two.”

Mind-bending scenes aside, the show is also about friendship and surviving bad times. In seven episodes that approach a half-hour each, one can easily watch the “I Am Not Okay with This” in one sitting.  It offers a brief but fruitful escape from the horrors of our outside world.

NF Ambery is an award-winning newspaper and magazine reporter published in Genre, The New London Day, The Register Citizen, The Hartford Courant and New York Family (where he was an editor).