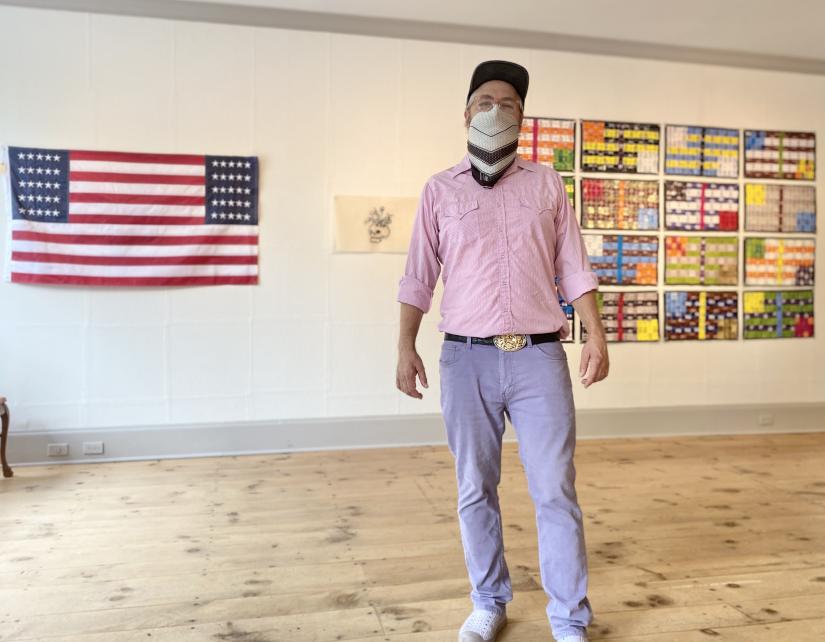 Adam Eckstrom has curated a flag-themed show at Standard Space in Sharon, Conn., that includes the works behind him by, from left, Mel Chin, David Scher and DARNstudio. Photo by Theo Coulombe​

Residents of the Tri-state region first met Lauren Was and Adam Eckstrom through their work as the art-creating duo Ghost of a Dream, when they exhibited their work at the Wassaic Project in the hamlet of Wassaic in the town of Amenia, N.Y.

Their work addressed our dreams of love, money and more, in pieces that were usually made of repurposed and sometimes “found” commercial art, specifically items such as the covers of romance novels or discarded lottery tickets.

The couple left New York City several years ago (washed up here in part following floods caused by Hurricane Katrina that destroyed much of their work and much of the ephemera they had gathered) and bought a house in Wassaic. They have a 4-year-old child now, and are continuing to do work on their own and together.

One of Eckstrom’s projects of the past few years has been the ArtForArtists Edition Exchanges. He curates a show, inviting in artists he knows and/or admires. Each artist creates enough iterations of a work of art so there is one exhibition piece; two pieces that can be sold; and one piece for each of the other participating artists.

The story now winds around to Sharon, Conn., where Theo Coulombe decided that, in 2020, he would invite other artists to curate shows at his gallery, Standard Space on the town Green.

Three shows had been organized; two of them were canceled by the COVID-19 quarantine. Eckstrom’s show was scheduled to open July 3, which coincided nicely with his chosen theme: American flags.

As Connecticut slowly reopens, the show called MESS (or Marker Emblem Symbol Signal) featuring flag-themed art by 13 artists, is now on display at Standard Space and can be seen by appointment only, in groups of six people or smaller. The show remains open until Aug. 13.

The works are for the most part gently political; they are esthetically pleasing while also making a statement about the divisions in our country.

There is an American flag re-sewn by Mel  Chin so that 25 stars are on the right side and 25 are on the left.

Connecticut artists David Anthone and Ron Norsworthy of DARNstudio have a 16-square “quilt;”each square is a flag of “quilted together” matchbooks that were custom made to commemorate the sites of aggressions and atrocities against minorities.

There is also a flag by Ghost of a Dream tucked into a corner in the back, made from money sacks purchased at a Trump casino bankruptcy sale. The red stripes on the bag were augmented with stripes in the colors of the LGBTQ+ flag.

Eckstrom and Was are also working now on a curated video event, in which artists from around the world are making videos of sunrises. In their own work as artists and sculptors, Eckstrom said, “We are definitely curators in the studio as well.

“Our basic rule — of making work about peoples’ hopes and dreams — is vast, and the people are prolific in creating detritus in pursuit of their dreams.

“Recently our projects, and in some ways our curatorial choices, have strayed away from aspirations of money and love toward justice and equality instead.”

To make an appointment to see Marker Emblem Symbol Signal at Standard Space in Sharon, Conn., email gallery owner Theo Coulombe at theo@standardspace.net or call him at 917-627-3261.