Skip to main content
THIS WEEK'S DIGITAL EDITIONS
Home / Home
Home » Compass A&E » Here We Are, in ‘The Twilight Zone’ … 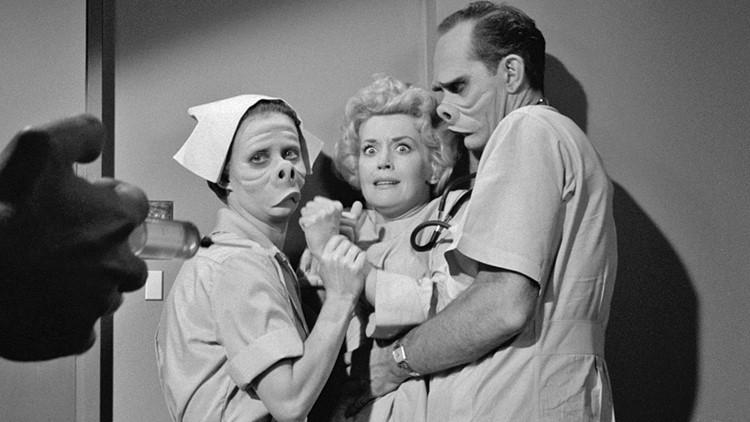 Donna Douglas, center, was featured in 1960 “The Twilight Zone” episode “Eye of the Beholder.” Classic episodes of “The Twilight Zone,” which began on Oct. 2, 1959, and ended on June 19, 1964, are currently streaming on Netflix, Hulu and Amazon Prime Video.

Here We Are, in ‘The Twilight Zone’ …

If your television preferences lean toward the uncanny but you have already exhausted director Jordan Peele’s rebooted “Twilight Zone” episodes, you may want to check out that show’s source material.

Classic episodes of “The Twilight Zone” are currently streaming on Netflix, Hulu and Amazon Prime Video. Viewing each episode is like biting into chocolates in a Whitman’s Sampler: You never know what flavor you are going to get.

Although I urge you to watch every installment, the ones below are my Top 10 Personal Favorites, with some Honorable Mentions. Don’t worry: no spoilers ahead.

Some background: Producer/writer/narrator Rod Serling’s black-and-white science fiction anthology series of half-hour episodes made its debut on CBS in 1959.

“Science fiction,” though, fails to adequately sum up the show, as it also incorporated elements of horror, black comedy, the western and the thriller. The show also served as a suspenseful platform for such socially relevant topics as racism, social injustice, mental illness and the inhumanity of man, in what came to be considered iconic story lines.

Season 4 in 1963 lengthened the series to one hour. The fifth and final season returned to a half-hour format. Today, the show is still remembered for its relentless narrative drive in compact storytelling, often with twist endings.

Following are my top 10 personal favorite “Twilight Zone” episodes, from lowest to highest.

A stripper recovering in a hospital from a nervous breakdown experiences a recurring dream wherein she wanders down corridors and pauses in front of Room 22: the morgue.

The doors burst open and she is greeted by a sinister nurse who announces: “Room for one more, honey!”

The recovering “professional dancer” is convinced the nightly dream is a premonition of her own death. Despite the show being one of six episodes of the second season to be recorded on videotape (a primitive medium at the time), the story and its fulfilling presentation deliver a lasting blow.

Millicent Barnes (played by Alfred Hitchcock favorite Vera Miles) has a problem. People in the station where she is awaiting a bus keep telling her she has been doing things she clearly hasn’t. The surly ticket agent insists she just asked him when the next bus will arrive two times already. The suitcase she has kept beside her while sitting on the bench the whole time suddenly appears checked, behind the counter.

As Millicent doubts her own sanity in the ladies’ room, a female custodian looks in on her. The bathroom door swings open and Millicent catches a look in the mirror at her own elusive doppelgänger sitting on the bench in the bus station.

In a Rolling Stone magazine interview, director Jordan Peele cited this episode, with its implicitly soulless, malevolent creatures, as an inspiration for his 2019 movie “Us,” which featured a home invasion of a family by their counterparts.

“Eye of the Beholder”

While lying in the hospital, Janet Tyler’s face is swathed in bandages. She is recovering from the last of multiple operations to correct a facial disfigurement. She expresses hope to doctors and nurses, whose own faces are carefully shadowed, on how this successful operation will be her ticket back into normal society. This episode delivers a visually dramatic statement on perspective and conformity.

“The Monsters Are Due on Maple Street”

A flash of light in the sky accompanied by a blackout and subsequent mechanical abnormalities lead the residents of Maple Street to turn against each other, to the point of mayhem and murder.

This installment says more about humans’ capacity for evil than it does about a suspected alien invasion.

Claude Akins, a familiar character actor who appeared in myriad films and television series, gives a grounded performance as the sole voice of reason drowned out by his neighbors’ terrorizing caterwauls of fear.

After the blown-out tire on Nan Adams’ car is repaired during a cross-country trip, the mechanic quips, “You shouldn’t have called for a mechanic; somebody should’ve called for a hearse.”

Then Nan begins seeing a disheveled man with a strange glint in his eye, hitchhiking on the side of the road. Although she passes him repeatedly, she keeps seeing, with increasing terror, that he is always ahead of her, always soliciting a ride.

Movie star Bunny Blake’s hometown fan club has given her a ring as a gift. Problem is, every time she looks into the ring’s stone, she sees visions of people from her past begging her to come home.

Forgoing a trip to a movie set in Rome, she returns to family and friends in Howardsville, Va. Fainting spells, hijacking the town’s annual celebration, and assorted strange behavior escalate the narrative tension.

And then you find out what it was all for.

This episode embodies ingredients of the best of the series: eeriness, lightheartedness and a hefty dollop of poignancy.

One of the most memorable and over-the-top episodes. A man recently released from a mental institution (played by William Shatner) is flying home. Complication: He is terrified of flying.

He keeps up a brave face for a fellow passenger, his supportive yet concerned wife. While in mid-air, he looks out the window and spots a gremlin tampering with the plane’s engine. Trouble is, every time he summons the airline steward or his wife, the creature disappears, making everyone, including himself, doubt his sanity.

This story was remade and incorporated into director George Miller’s outrageous segment (starring John Lithgow) in the 1983 anthology “Twilight Zone” movie. Director Peele’s 2019 “Twilight Zone” series reimagined this episode as a more psychological tale in “Nightmare at 30,000 Feet” (a higher altitude) featuring a PTSD-afflicted journalist driven by a strange podcast to hijack a plane.

Years ago, while listening to a friend’s mix tape, I was curious about the odd, affected dialogue he had planted between songs. I found out later it was recordings of Twilight Zone episode “The After Hours.”

I finally watched the episode, which has an unsettling appeal. Marsha White visits a department store to buy a gold thimble for her mother. She is directed to the ninth floor, where she encounters an empty, dimly lit floor with a preternaturally polished saleswoman selling the one thing she wants: a gold thimble.

Marsha quips, “Well, you may be more sophisticated than I am, but this is what I call odd!”

This, however, is only the beginning of the weirdness.

“Will the Real Martian Please Stand Up?”

In this otherworldly twist on the classic whodunit, two state troopers follow footprints in the snow trailing from a crashed UFO to a diner filled with seven snowed-in bus passengers. Trouble is, the bus driver insists to the police that he only has six passengers. Neither the bus driver nor the other passengers can figure out who is the odd man or woman out. Twist upon twist makes this episode “Alien” meets the Agatha Christie tale “And Then There Were None.”

“And When the Sky Was Opened”

This adaptation of a Richard Matheson short story explores all kinds of themes: the butterfly effect, the role of memory, fate versus free will, and the meaning of existence.

After their spacecraft disappears for four hours and then crash lands, an astronaut, Lt. Colonel Clegg Forbes, visits a colleague still recovering from the accident in the hospital.

Clegg insists there were three astronauts, not the two that were listed in the newspaper account and which seems to be in everyone’s, including the recovering colleague’s, collective memory.

The third astronaut, also Clegg’s friend, is presented in flashbacks with a different newspaper headline. “This is a gag, isn’t it?” Clegg stammers, behaving like he is losing his mind.

But more importantly, Clegg confesses he nurtures a gnawing feeling that he no longer belongs in this world. Arguably the best installment in the series, with powerful acting and the story’s tentacles bringing in elements of sci-fi, horror and existentialism.

The above may be good places to start. You are, however, urged to watch them all and decide for yourselves. Classic episodes of “The Twilight Zone” are currently streaming on Netflix (which carries Seasons 1 through 3 and Season 5). All five seasons are available on Hulu and Prime Video.

Readers who would like to vote for their own favorite episodes are invited to send them to cynthiah@lakevillejournal.com. Send the season and episode number and title and a short explanation of why it’s meaningful to you.