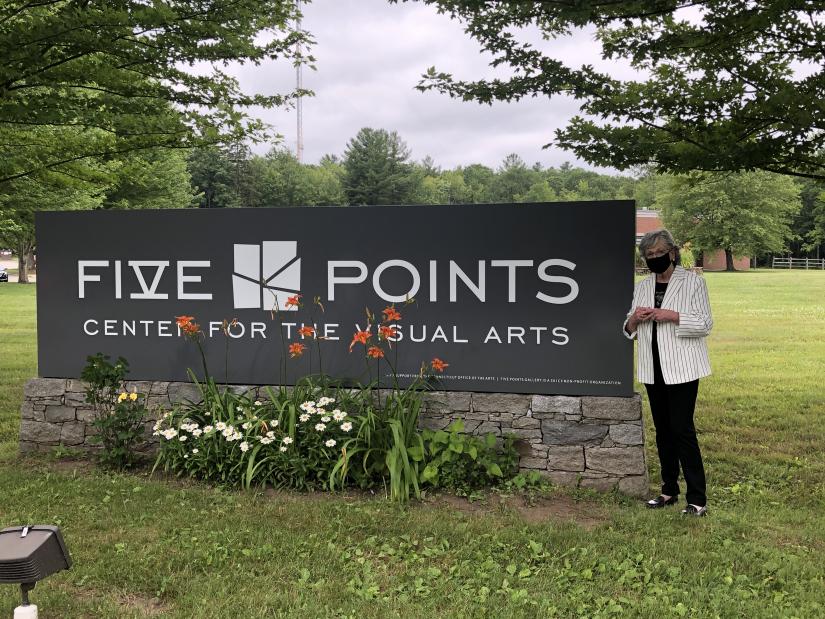 The planned purchase of the University of Connecticut’s Torrington campus by Five Points Gallery has been completed, thanks to the leadership of Center Director Judith McElhone. Photo submitted​

Judith McElhone’s lofty vision for creating a world-class contemporary art center in northwest Connecticut has taken flight. On June 30, closing papers were signed transferring ownership of the former University of Connecticut Regional Campus in Torrington to Five Points Center for the Visual Arts, of which McElhone is founder and executive director.

“It was two months and two years in the making,” said McElhone, referring to the timeframe since submitting a letter of interest to purchase the shuttered campus on University Drive, which has a 30,000-square-foot building and 90 acres.

“With the purchase of the campus facility, we will intensify our efforts to encourage exploration among cutting-edge artists while opening new avenues of community interaction.”

The deal transfers ownership of the main building and slightly more than 22 acres from UConn to Five Points. The remainder of the unimproved acreage is being leased by the City of Torrington to Five Points for $1 a year for 20 years, with an eventual option to buy in the future.

The long-awaited transaction took place with little fanfare due to COVID-19, but McElhone said she plans to “do a major launch party on the campus in September,” amid a spectacular autumn backdrop.

“COVID-19 is impacting everything,” but it isn’t stopping progress, said McElhone. “The building itself is almost turn-key, and we are retrofitting artist work spaces. As soon as we get settled in, we will hold outside programming. The idea is to use the land in a safe way — and it’s much safer outside with COVID-19.”

The immediate goal, she said, is to create a safe, welcoming outdoor space for artists, friends, neighbors and visitors. “Plein-air painting, drawing marathons, concerts and outdoor movies can provide much-needed sanctuaries for healing and creating. Seldom has the world needed these collaborations more than today.”

Overall, said McElhone, the transformation of the property will create a unique, sustainable multi-level visual arts center and adjacent art park that will strengthen the social fabric and economic growth of the region. At capacity, the center is expected to generate 20 new full-time positions and 15 part-time teaching and staff positions. “When you bring in artists, economic development follows,” she noted.

The center’s executive director said the acquisition will “solidify Five Points Center as among the most progressive arts organizations in New England.”

Future plans include renovation of the main campus to include fully equipped artists workspaces including studios for painting, sculpture, ceramics, textiles and print, a bio-lab, digital lab, darkroom and courtyard sensory garden. The existing 245-seat auditorium and commercial kitchen will allow for large indoor gatherings and the 90-acre art park will showcase sculptures created by regional, national and international artists.

One of the most important aspects of the new center, said McElhone, will be the Lynchpin Program, envisioned as “a Thinktank for artists to collaborate and experiment.” Thinktank artists, she said, will be selected for their interest in issues impacting everyday life. “There will be an emphasis on the environment and planet sustainability,” she said.

Funds raised combined with grants will cover needed renovation, facility and program needs. The actor and musician Kevin Bacon, who has a home in Litchfield County, is the honorary chair of the new Arts Center’s fundraising campaign.

McElhone, a lifelong artist who taught painting at Northwestern Connecticut Community College in Winsted for many years before founding Five Points Gallery in 2012, marveled at how a plan to open a humble summer storefront art gallery in the heart of Torrington has taken on a life of its own.

“Who knew?” said McElhone, that the success of that temporary space would lead to the founding of a permanent Five Points Gallery, as a dedicated space to exhibit works by prominent regional, national and international contemporary artists. At one time, she mused, she had to practically beg artists to exhibit in Torrington, and now she is “bombarded” with applications from Connecticut and beyond.

McElhone credits staff, volunteers and supporters for helping to write the newest chapter in the center’s history. “They are all wonderful people who understand that the arts are more than a commodity,” and that the interaction between arts and science “can make a big difference in the world.”