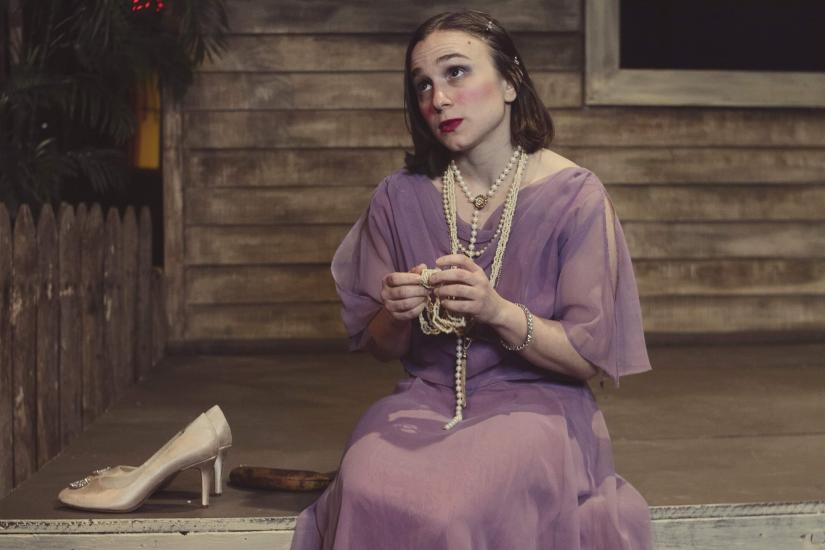 Reesa Nestor is Willie in “This Property Is Condemned” by Tennessee Williams, which is at the Sherman Playhouse. Photo by Agnes Fohn

Tennessee Williams And the Uncertainty of Life

Katherine Almquist promises that the Sherman Playhouse will not close down during this month’s run of three one-act plays by Tennessee Williams.

“Even if there’s only one person in the audience, the show will go on,” she vowed, with the grit of a true theater person.

Almquist is a seasoned veteran of productions at local theaters and a founder of the former Kent Community Theater, which merged with the Sherman Playhouse in Sherman, Conn., about a decade ago.

Having said that, however, here’s the thing: The town of Sherman decreed this week that the theater must close for now. It’s anyone’s guess when it will be allowed to open again, and whether the current show of works by Tennessee Williams will extend beyond March 28.

So for now,  “Three by Tenn” is on hold. Check the theater website to find out what will happen.

Almquist chose the three plays. For this production, she is not performing — she is directing.

“Tennessee Williams wrote more than a hundred plays and he’s known for only a handful of them.”

The lesser-known works are eminently worth saving, she said, describing the playwright as one of the world’s greatest.

“His language is lush, lyrical, it elevates the spoken word to new heights.”

While a student in college, she played a role in “The Gnadiges Fraulein,” published in 1965, “And I loved it. It spoke to me. And all these years later, I wanted to put it on again.”

Williams referred to the play as “slapstick tragedy,” the tale of a group of “grotesques” who are the “permanent transient” residents of a boarding house in the deep South.

“It’s a world in which everything is askew and casual everyday cruelty is the norm,” Almquist said. “It’s a tragedy. But there are many hilarious lines.”

“These plays are funny. And they’re sad,” Almquist said. “They’re like life.”

Opening on May 7, if it can, is “Whodunnit” by Anthony Shaffer (who also wrote the popular play and then film, “Sleuth”); it should run until May 30.

A highlight of the season will be the autumn show of “A Doll’s House Part 2,” which visits Nora Helmer 15 years after she’s left her marriage (in the original “A Doll’s House” by Henrik Ibsen). The play was first performed in 2017 and was written by Lucas Hnath. Laurie Metcalf won a Tony Award for her performance as Nora on Broadway.

To find out more about the shows and when the theater will open again, and to order tickets, go to www.shermanplayers.org. Tickets are $24 for adults, $12 for students and for youths, age 12 and under.