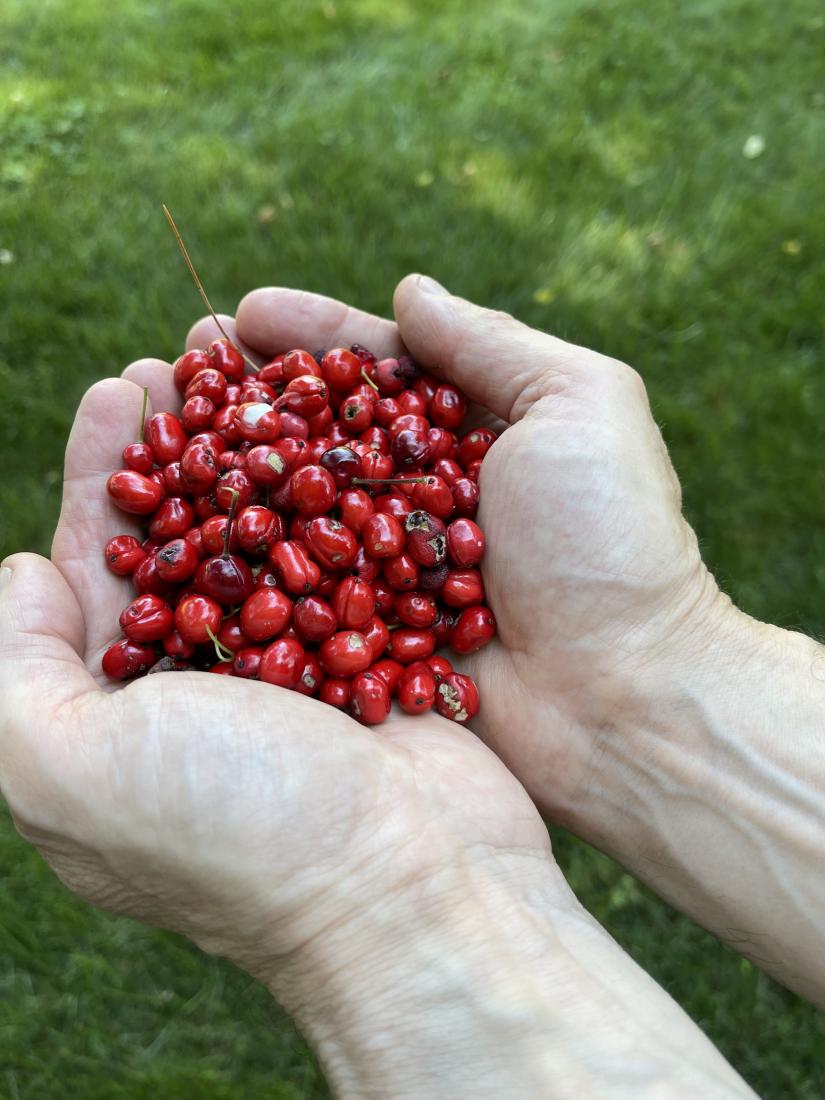 While the spongy moths have stopped destroying the tree canopy for this year, it’s a banner year for Red Actea or baneberry.  Collect the seeds to sow in the woods for future flowers. Photo by Dee Salomon

Too Much of a Good Thing? Probably, Yes

A last word, for now at least, on the spongy moths; my friend Spencer asked if the open tree canopy created by the caterpillar destruction had caused a  plant growth spike here. Well, yes, I had noticed that the trees had grown vastly taller than in years past. That leaves were larger — wild strawberry leaves the size of my hand.  And that there was barely a bare patch of earth. But I had done such a thorough job with the dastardly caterpillars, scraping off the egg sacs all fall and winter and spraying the BT from the moment they hatched, that the damage was minimal except to the tallest oaks (no small thing); the tree canopy was largely intact.

I have a different hypothesis to make sense of this year’s explosive plant growth and, while I have not heard or read anything similar, I believe it may be true.

Last year we had a massive infestation of Asian jumping worms. They were crawling everywhere and devoured almost every inch of topsoil on our property (for the full disgusting story, read “Don’t Look Down” in the February 2022 issue of the Cornwall Chronicle at www.cornwallchronicle.org/wp-content/uploads/February_2022.pdf).

In the digestive process, the worms had released way more nitrogen than the soil would in its normal decomposition. This — that Asian jumping worms release nitrogen in the soil — I can verify with standard Google searches.

For plants, nitrogen is the key to growth. So it makes sense that, with the release of nitrogen into the soil, I am seeing extravagant growth this year.

Other vital nutrients have been depleted by the worms, so the impact remains to be seen.

And another factor is also at play: The worms have churned up seed that had been buried underground for years and, all of sudden, could germinate.

Areas that had been meticulously weeded for years now are carpets of both native and non-native plants. While the Trillium are 3x last year, the narrowleaf bittercress are 8x.

As I sit on the woodland floor to pull the bittercress I become aware of something that is not here : the culprits themselves! Where have the jumping worms gone?

I thought at first that this had to do with the bone-dry soil, but after the rains last weekend I pulled bittersweet and burning bush on at least 10 different areas and still found not a single one. It is still too early to tell, but could it be that, having sucked everything nutritious from the soil, they are not able to make a go of it this year?

NB: Two days after writing this, I found two worms, each about 3 inches long, while weeding in the near woods.

At least where I am situated, in Litchfield County on the shores of the Housatonic, it is a banner year for Actaea Rubra — the baneberry that boasts bright red berries on upright stems. On our property, I am picking the berries, not to eat, as they are poisonous, but to sow back into the woods.  I have been harvesting and planting this seed for years; it is easy to do and works well.

Same for Actaea Pachypoda, the doll’s eye or white baneberry that is a bit rarer and whose seed matures later in the season. I always leave a few berries on the plant for the birds and mammals that eat them; soak and separate the seed from their fruit using a colander and my fingers (some people are sensitive, so gloves are a good idea).

In the fall I will spread the seed in the woods. It takes a year or two to germinate; the result is glorious. A spare, horizontal set of leaves and an elegant vertical spike that ends with a white filigree of flower. The flowers become bright red berries that gracefully arch the stem. Look out for them …