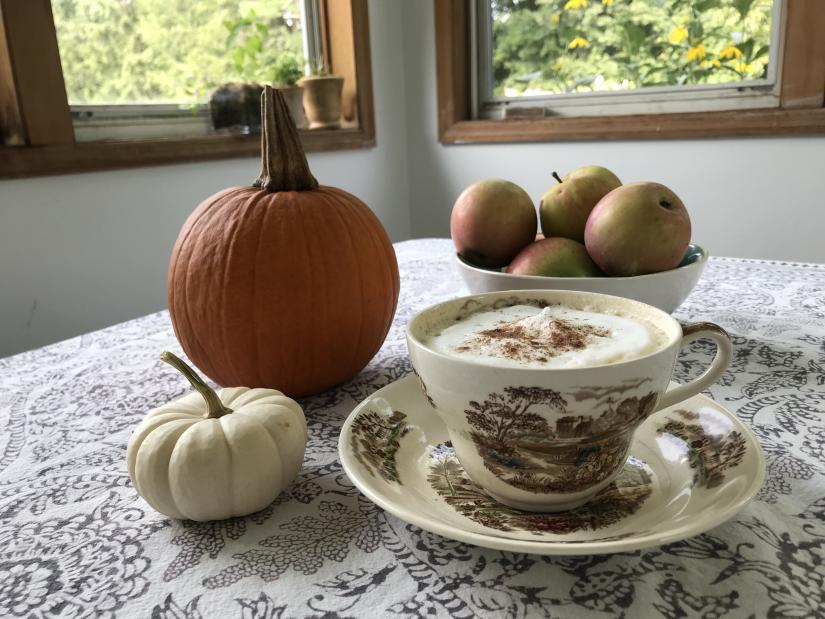 If you don’t find a commercially produced pumpkin spice latte that’s to your liking, try making one yourself. It’s surprisingly easy. Photo by Cynthia Hochswender

Tips From an Expert: Finding the Best Pumpkin Spice Latte

October 7, 2020
By
Kate Hochswender
The pumpkin spice latte, or “PSL” as it’s sometimes called, is a coffee drink that combines all the tastes you associate with pumpkin pie: pumpkin flavoring, cinnamon, nutmeg, ginger, cloves.

The arrival of the Pumpkin Spice Latte to the Starbucks menu has become a harbinger of autumn since 2004, when it was first released.

Now, more than 15 years later, almost every establishment that sells coffee in America has its own pumpkin spice latte recipe that it sells from late September through October.

The pumpkin spice latte, or “PSL” as it’s sometimes called, is a coffee drink that combines all the tastes you associate with pumpkin pie: pumpkin flavoring, cinnamon, nutmeg, ginger, cloves.

Over the years I have become a connoisseur of all things pumpkin spice. I’ve taste-tested nearly every PSL product on the market — so you don’t have to.

The most famous, of course, is the one offered by Starbucks. Their version is classic and quite good — especially the Pumpkin Spice Frappuccino (a cold, blended drink) and Pumpkin Cream Cold Brew (cold-brew coffee topped with sweet, pumpkin-flavored cream). These are menu items unique to Starbucks.

However, if you just want a classic hot, pumpkin spice latte, and if you don’t feel like driving for 45 minutes or more to get to a Starbucks, I would recommend getting one from McDonald’s or Dunkin’ Donuts. Brand snobs might argue otherwise, but the hot pumpkin spice latte from these three chains offer essentially the same experience. If you want a hit of caffeinated PSL this Pumpkin Spice Season, I don’t think you’d miss out by going to McD or Dunkin’ instead of Starbucks.

Cumberland Farms (which has filling station/convenience stores in Amenia, N.Y., Millerton, N.Y., Great Barrington, Mass., and Torrington, Conn.) has a make-your-own pumpkin spice latte syrup with their other coffee condiments, next to the milk, sugar and creamers. You can add as many shots of syrup as you’d like to your coffee for either a more subtle or a maximized version. Cumbies also offers a pumpkin cappuccino from its cappuccino machine that will be well-received by anyone with a sweet tooth.

There’s also a variety of pumpkin spice coffees and creamers you can buy at your grocery store, including non-dairy options. My favorites are the Pumpkin Spice Latte Cold Brew Coffee with Almond Milk by Califia, which has nice notes of cinnamon and nutmeg and is mild enough that you don’t feel like you’re drinking a dessert. I also like the Chameleon brand pumpkin spice oat milk latte, which is more spicy than sweet, differentiating it from many of the PSLs on the market.

If you’re not a coffee drinker, Harney & Sons tea company, based in Millerton, has a Pumpkin Spice Tea.

If you are staying homebound due to quarantine, we’ve found a recipe for a pumpkin spice latte that you can make yourself at home.

This is from the website www.sweetsteep.com; the recipe was developed by a woman whose daughter was a barista at Starbucks. We found it was easy to make and tasted just like the Starbucks PSL — or actually, a little bit better.

We happened to have a couple cans of Libby’s canned pumpkin in the pantry; when we went to the grocery store to pick up a few more cans we were surprised to find that none of the area grocery stores that we visited had any in stock.

The internet isn’t indicating that there is a canned pumpkin shortage this year, as there was in 2015. We were shopping in late September, so it’s possible that it was just a bit too early for the stores to be stocking it.

Some stores have the One-Pie brand of canned pumpkin, which gets high marks from users on the internet.

However, if you are unable to find canned pumpkin (and be sure you do not buy canned pumpkin pie mix, which already has spices added) there is still time to buy a baking or pie pumpkin at your local farm stand. Roast and puree the flesh, scoop it out of the shell and remove the seeds. Then be sure to puree the roasted flesh and then run it through a food mill. To give it more body, you can add roasted butternut squash or sweet potato; fresh pumpkin is always a little more stringy and watery than the canned version.

One 14-ounce can of sweetened condensed milk

You can buy premade pumpkin pie spice, but you probably have all the ingredients for it in your pantry already. Save yourself some money, and use up your spices before they start to lose their flavor.

To make the pumpkin spice latte syrup, first make a simple sugar by combining a half cup of water and a half cup of sugar in a small saucepan over medium heat. The sugar will dissolve into the water and then begin to boil; when it does, turn the heat to low and add the pumpkin puree, the condensed milk, the pie spice and the salt. Stir them together for a couple minutes over low heat and then set the mix aside and let it cool.

Be sure that you use condensed milk, which is thick and sweet, and not evaporated milk or any other canned milk product. The two most common brands around here are Magnolia from Borden’s, which was made here in the Tri-state region for many years by the Borden family; and Eagle Brand (and actually, Eagle makes the Magnolia milk too).

When you’re ready to make a latte, you don’t have to use espresso, you can just make coffee (as strong or weak as you like). I use about two tablespoons of syrup for each normal-sized cup of coffee; experiment until you find the amount that you like.

You don’t need to add milk —but if you have a milk frother you can of course scoop some on top of your latte, and sprinkle a little dusting of pie spice over the top.