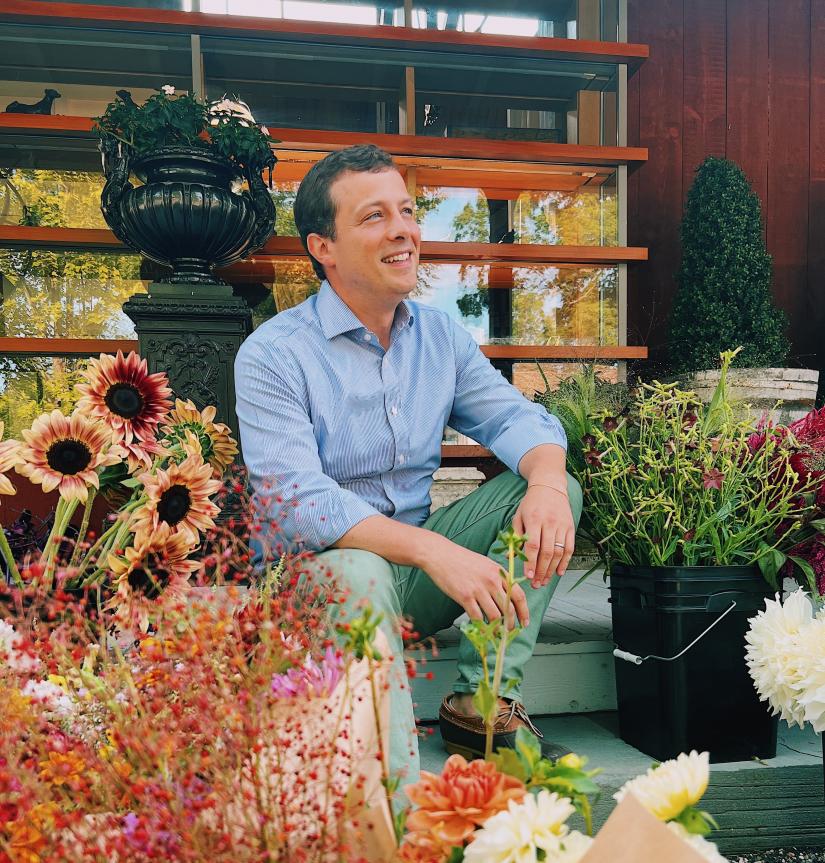 Jeb Breece is part of the wave of young New York families who have moved to the county full-time. Photo by Alexander Wilburn

They’re new, they’re young, are they here to stay?

It was 8 a.m. on a Saturday morning, the air sharp with an end-of-summer chill, when I meet Jeb Breece to set up the Kent Flower Market. The parking lot of Kent Barns in front of RT Facts Design & Antiques was a high-priced ghost town apart from our cars, but just give it a few hours. If you grow it, they will come.

Breece, 40, and his wife Sabina, 42, are part of a new wave of fresh-faced “full-timers” in rural Litchfield County, Conn., ex-Upper East Siders who traded Ralph’s Coffee and The Metropolitan Museum for winding backroads, old stone libraries and plenty of deer. The COVID-19 pandemic ignited a real estate surge in sleepy Northwest Connecticut, with families in their mid-to-late 30s and early 40s migrating not just for a season, but for permanent residence.

While Sabina may stop by the market with friends, the flower fever is all Breece, a portfolio manager at a wealth management and investment firm in Midtown Manhattan. He’s been growing flowers a d native plants at their home in Salisbury, Conn., Posy Hill Farm — named after the family dog. On market days, the second Saturday of each month, he’s joined by his 10-year-old son Henry, a day student at Indian Mountain School in Lakeville, Conn. Dressed to sell flowers in a Harry Styles-esque pairing of pearls and nail polish, Henry remarked he has an older brother who prefers sleeping to getting up bright and early to hawk dahlias (I can relate). “He’s going through puberty,” Henry said.

It was the last days of dahlias that September morning — and also the first time Kent Flower Market had offered the big rainbow-petalled perennials, due to drought conditions that August. Working with local agriculture means working within the parameters of the seasons and finicky weather conditions. Breece told me outright most of the flowers he sells would likely be considered “rejects” on a large professional scale, like New York City Flower District in Chelsea. Imperfect, by-the-season flowers are not the way most Americans are used to shopping for bouquets, which are grown and packaged overseas in countries like Ecuador or the Netherlands, and shipped to U.S. supermarkets. Brown Political Review reported in 2019 that “the cut flower industry in the United States takes in $34.3 billion of revenue each year. Of the flowers Americans buy, nearly 80% are imported from Colombia.”

Breece’s flower market, as “imperfect” as the mix of dahlias, geraniums, sunflowers, and celosias may be, are the product of his own garden with flowers grown on local farms like Anderson Acres in Kent — which is where we headed to pick up buckets of blooms for the market. Breece easily sees the benefit. “Carbon footprint is way less, plus keeping money within the local economy as opposed to shipping it off to global supply chains. Not to belittle… Look, where those flowers are grown, that production is likely done with low-cost labor and the people there need resources, but this is our community and I think it’s important we have a local farm economy.”

The goal, even on a petite fleur scale, is to aggregate supply and demand. “Help farmers sell their product even if they can’t be there at the market,” Breece told me. “I buy all the flowers from the farmers, I take the inventory risk, if it’s a s — y market, I eat it. I basically try to break even. We’re selling pretty close to wholesale price.”

Wholesale-priced bundles of dahlias meant a busy market once they opened at 10 a.m., especially for Henry, who had no problem swiping credit cards while I wrapped flowers in brown paper. He’s obviously in the right father-son side hustle, as he told me about the Martha Stewart fanfiction he pens in his free time, “Martha Stewart vs. Tacky Décor.” Henry’s hoping she’ll apparate, in the Harry Potter use of the word, one day at the flower stand. (Ms. Stewart, if you’re reading, come on Nov. 26 to make a middle schooler's dream come true.)

In the 2010s their family had a second home in Kent for excursions from the city. As Breece told me, “Pre-pandemic we were just weekenders. We came up to the country and we did our thing, kept to ourselves.” Now full-time homeowners in Salisbury, with their sons both at Indian Mountain, their view of these small towns has altered. “If you just look at my family’s involvement in the community, compared to when we just come up occasionally, it’s all changed dramatically for us. Now we’ve started the flower market, my wife’s gotten involved with The Little Guild, with Sharon Playhouse, I’m on the board of Hollister House, I’m on the board of Women’s Support Services. We also funded a joint project to turn a piece of conserved land in Salisbury to rehabilitate it into a wildflower meadow.”

Breece will tell you he’s heard Indian Mountain, a private school that typically accepted a large portion of international boarding students, now has a waitlist for eager day students — a demand that didn’t exist in previous years. “I really thought we’d see this wave that would dissipate… that after a year couples would start to say, ‘I can’t get sushi, I can’t go out,’ but people are staying. Our group who have come here, some of us have gotten involved in the community, but there are a lot of new families up here who still need to find their way to get involved”

The Connecticut census reports that a third of Salisbury’s population is 65 and older, but it doesn’t take statistics for Breece to see many of the town’s foundational institutions are run by a rapidly aging population in need of fresh support. “The community and nonprofit boards here skew really old, really retired — some incredible skill sets there, and great people — but there need to be new members if it’s going to survive. The wave of young families up here haven’t gotten there yet. Our group needs to step up.”

The Kent Flower Market returns for a holiday greenery sale on Nov. 26 at Kent Barns in Kent, Conn.