Skip to main content
THIS WEEK'S DIGITAL EDITIONS
Home / Home
Home » Compass Ae Recreation » Tart, Citrus and Sunny, Marmalade Is a Reason To Get Out of Bed in Winter 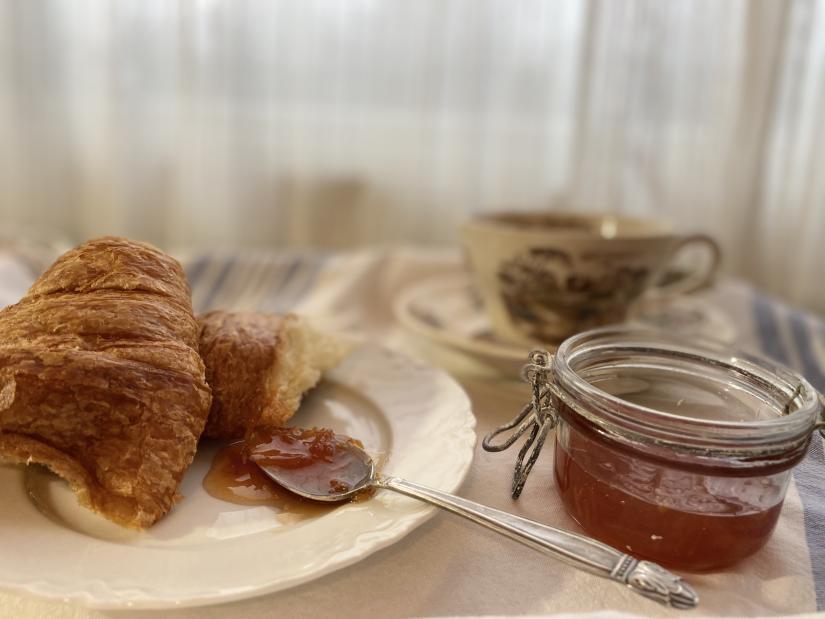 Tart, Citrus and Sunny, Marmalade Is a Reason To Get Out of Bed in Winter

There’s an apocryphal story about marmalade that says the sugary citrus jam got its name from Mary, Queen of Scots (the famous Mary from the 1500s, who was a cousin to Queen Elizabeth). Supposedly, the future queen was ill and her grandmother’s cook, who had a large supply of citrus fruit on hand, was trying to find something to tempt her to eat.

“Marie est malade,” he kept muttering in French (Mary is ill) as he tried out confections, ending up with the one that became known as “marmalade.”

The name actually comes from the Portuguese word for quince, which was originally the fruit used to make marmalade.

Over the centuries, what we have come to know as marmalade is usually  made from citrus fruit, particularly oranges.

There is no realistic way to make it seem like marmalade is healthy, other than that it’s made from the peels and juice of citrus fruit (which are healthy, especially now, in the middle of winter). But like all fruit preserves, marmalade is made with a lot of sugar.

So, healthwise it’s hard to recommend marmalade. But in the COVID-19 quarantine world, if we all began baking bread last spring, then why not continue to entertain ourselves in quarantine by learning to make fruit preserves, which go so nicely with bread? And since it’s winter, the fruit in greatest abundance is citrus.

Making marmalade is a lot of work, perhaps more than the average fruit preserve; but the color and flavor can definitely brighten up a gray winter morning and give you a reason to get out of bed.

For Christmas, my friend in Seattle gave me a copy of a book by a local chef (Yossy Arefi) called “Sweeter off the Vine.” It’s divided by seasons and many of the winter recipes involve citrus; and for some reason the marmalade recipe really reached out to me.

I made a batch. I wouldn’t do it every week, but it’s delicious and I recommend it if you have several hours to devote to lavishing attention on a few pounds of citrus.

The recipe calls for blood oranges and Meyer lemons, which I found at a Trader Joe store last week. You can use any citrus, even clementines or grapefruit. The blood oranges of course add spectacular color; and the Meyer lemons (which you can often find at Stop & Shop in North Canaan at a reasonable price) have a much softer, thinner skin that’s easier to work with. Whichever fruit you use, the thinner the skin and the plumper the fruit, the easier and more delicious your marmalade will be.

This recipe calls for 2 pounds or about nine blood oranges; 1 pound or about four Meyer lemons; one regular lemon; and 5 cups of sugar (yes, it’s a lot).

You’ll note that you don’t need to use pectin in this recipe, but you will want to get citrus fruit that has seeds in it (the pectin is in the seeds).

This will make lot of  jam, so you’ll want to use canning jars with fresh sealing lids to preserve it. I use the 4-pint Ball jar known as the 125. I filled about six of them, and had about 2 cups of jam left to put in a regular jar that I did not “preserve.”

Before you get going on the fruit, either clean the jars in your dishwasher so they’re hot and sterile or boil them for 10 minutes.

You’ll need a very large, clean pot for boiling the jars after they’ve been filled; a clean funnel; some paper towels; and if possible a pair of canning tongs to lift the jars.

The tedious preparation of the fruit

Scrub your fruit and then use a juicer to get all the juice and most of the membrane out of the fruit.

Toss out the membrane but keep all the seeds.

Save the juice, of course.

After juicing, you should have a couple dozen half rounds of citrus. I cut each half round into three pieces and then used a sharp knife to carefully slice away the bitter white pith on the inside of the peel.

It’s tedious but necessary; do it while you listen to a podcast or watch a movie. The less bitter, spongy pith on your peel, the better your marmalade will taste.

The next step is equally tedious: You need to take your scraped peels and slice them as thin as possible, as thin as blades of grass or hay. Don’t worry about the length; long strands are actually kind of pretty.

If you have an InstantPot, now is the time to get it out: You need to boil the peel strips in 2 quarts of water (8 cups) until they’re tender and almost translucent — which can take up to an hour if you do it on your stovetop.

If you have an InstantPot, combine the water and peels and cook them on high pressure for 10 minutes, then quick release the pressure. If you don’t, use a large nonreactive pot and boil them lightly until they’re ready. You’ll need about 3/4 cup of the cooking liquid, so keep an eye on the pot and make sure you don’t boil away all the liquid. That’s one advantage of the InstantPot: Your liquid won’t boil away.

When they’re tender and almost translucent, rinse the peels in cool water to stop them from cooking any more.

At this point your jars should be clean and hot and ready to take out of the dishwasher; put them on a cookie sheet and put them in a 200 degree oven, so they’re warm when the jam is ready: If you put hot jam in a cool jar, the glass will crack.

The next two steps have to be done on the stovetop. First, take your giant pot and fill it with enough that your jars will be submerged. Start it boiling so it’s ready for canning as soon as the marmalade is done cooking. Once it’s boiling, reduce it to a simmer.

In a large pot that has a ceramic or other nonreactive surface, combine the citrus peels, the citrus juice (from way back in step one), the sugar, the citrus seeds (tie them up tightly in cheesecloth) and 3/4 cup of the cooking liquid.

Bring it all to a rolling boil (very big bubbles but not foaming) and keep cooking for about 30 minutes. At this moment, it’s great to have a cooking thermometer, to check when it reaches 220 degrees.

If you don’t have a thermometer, put some spoons in your freezer and then test a spoonful  of marmalade at a time by putting it in the freezer for a few minutes to see if it gels up. I don’t personally find this method works very well but …

In which we say ‘carefully’ again and again

Once your marmalade is done, turn off the stove and take your tray of canning jars out of the oven.

Carefully  spoon the jam into the jars, leaving a quarter inch of air at the top. Wipe the top and sides of the jars carefully with a wet paper towel; if there’s jam overflow, your jars won’t seal.

Carefully place your jars in the simmering water in your big pot. You don’t want them to tip because you don’t want any jam to spill on your jar, which could keep the jar from sealing.

In a perfect world, you should have a trivet at the bottom of your big canning pot so your jars don’t touch the pot surface, which can cause them to break. This sounds much fussier and harder than it actually is; I didn’t use a trivet and I did tip my jars over as I was putting them in the pot, and it was fine — but it’s possible that I just got lucky.

Return the heat to high so your water is boiling vigorously again, then boil your filled jars for 10  minutes.

Remove them carefully and set them down in a spot that’s relatively not sunny and relatively cool, which at this time of year is pretty much anyplace in my kitchen. Don’t move the jars for 12 hours, so you don’t ‘“break” the set of the marmalade or the seal on the jars.

If at the end of that time the lids aren’t sealed, clean the lids and jars again and boil them again for another 10 minutes. If your marmalade didn’t set, I suppose you could pour it all back in a clean pot and boil it down some more.

I always feel like preserving jars of food is very intimidating and time consuming, but it really is very easy. You just boil your jars for 10 minutes. Done. But it does help if you prepare your jars correctly and have the right tools. If you want to learn more about canning, go to the National Center for Home Food Preservation website at https://nchfp.uga.edu.

The Jan. 7 print edition of The Lakeville Journal and Millerton News had a recipe error. It said the marmalade should be kept at a rolling boil with "very big bubbles but foaming.” It should have said, “but not foaming."