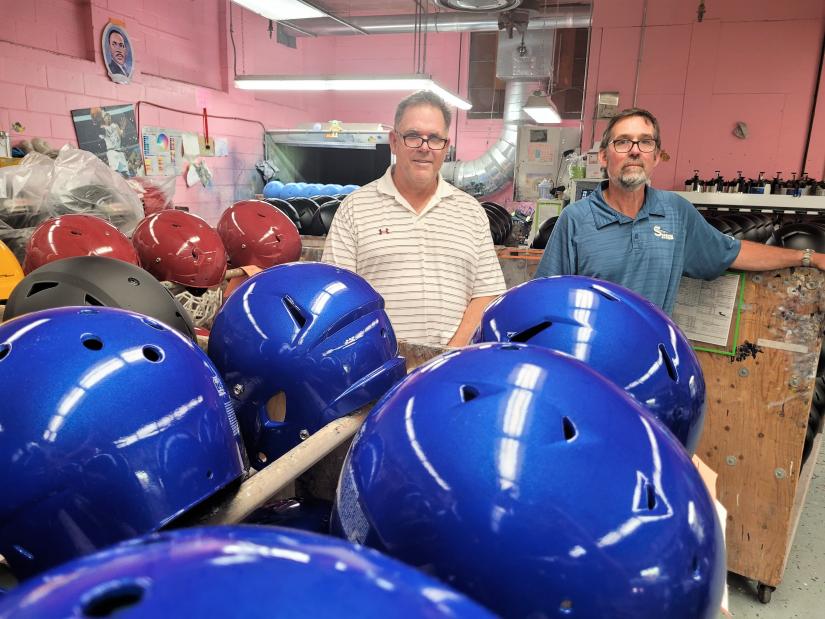 Ed Schopp, left, and Mike Schopp are the owners of the North Canaan-based Stadium System, which refurbishes tens of thousands of football helmets annually in preparation for the new gridiron season.  Photo by Debra A. Aleksinas

While most people spend the summer in leisure mode, for Mike and Ed Schopp, owners of Stadium System, Inc., in North Canaan, Conn., it’s crunch time. That’s because from June through the beginning of September it’s all hands on deck in preparation for the arrival of fall football season.

The third-generation company, founded by Arthur Schopp in 1948, specializes in refurbishing football helmets and equipment for school athletic programs throughout the Northeast, from youth to college teams.

Tens of thousands of helmets pass through their factory each year. For months, the Schopp brothers are literally up to their eyeballs in football gear. The helmets get washed and buffed. Primed and painted. Inspected, repaired, re-decaled and refurbished to spit-shiny perfection.

During an early September visit, rolling carts cradled rows upon rows of refurbished helmets, adding a kaleidoscope of color throughout the sprawling North Canaan factory.

While refurbishing football equipment is only one component of the family-owned business [an adjacent building houses the company’s sports retail store], it is a major focus and has roots in Stadium System’s humble beginnings.

Founder Arthur Schopp was a former football player at New Rochelle High School and New York’s Columbia University. His passion to stay in the game inspired him to start his own business serving schools in the athletics supply and reconditioning industry.

Under Arthur’s guidance, his son Roald “Rollie” Schopp and son-in-law Richard Brooks learned the reconditioning craft and carried on the family business through the early 1990’s. Currently Roald’s sons, Mike and Ed, own and operate Stadium System and are carrying on their grandfather’s mission: to provide quality service and products to athletic programs throughout the Northeast and beyond.