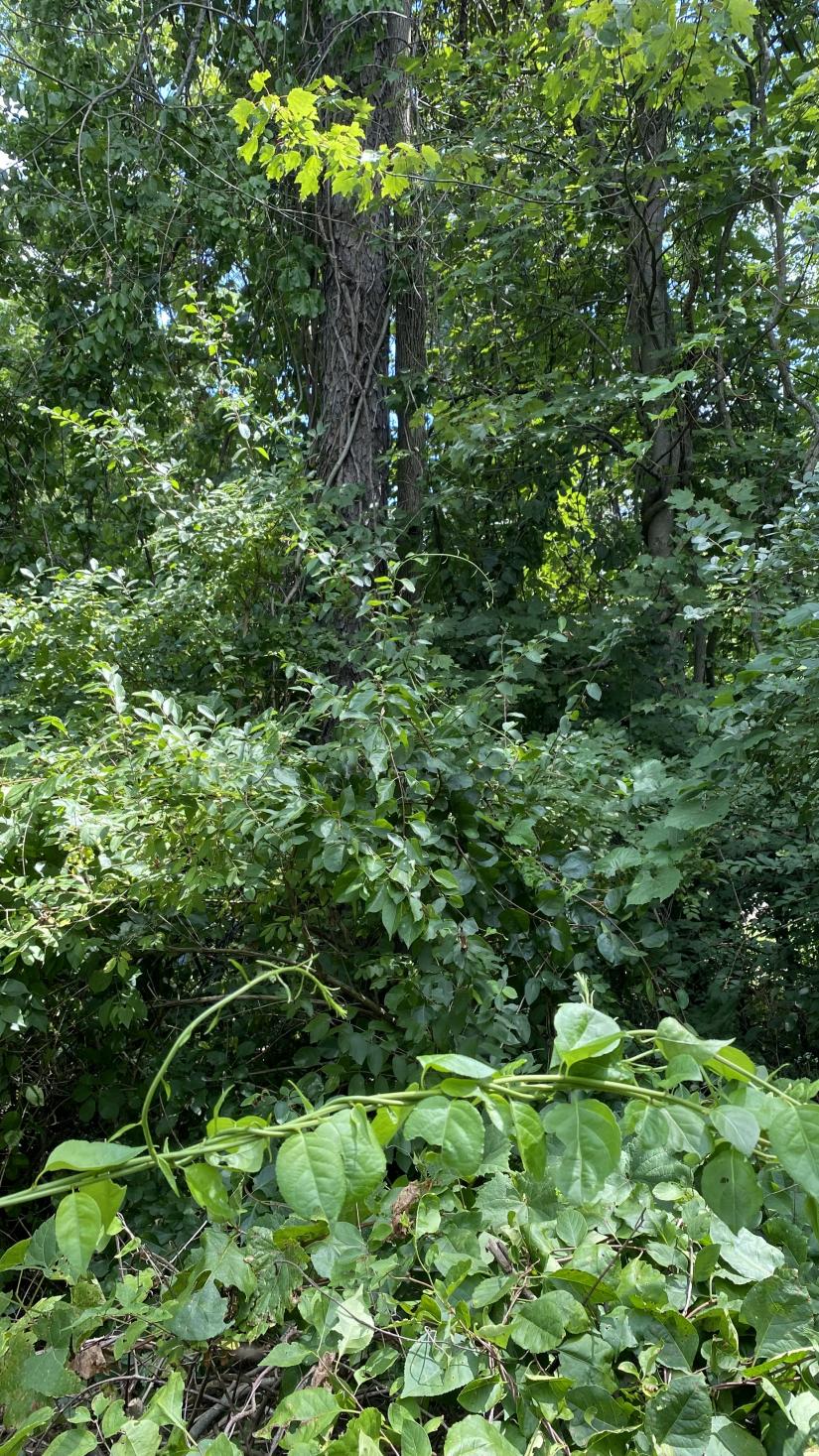 What might seem like lush greenery in our surroundings is often actually a choking non-native invasive. Photo by Cynthia Hochswender

Many people fall into the former category; I did too. Ten years ago, we moved, as weekenders, to the banks of the Housatonic River in Litchfield County. As we began to look more closely at the trees surrounding our cottage and that marked the beginning of the woodland, we came to realize that the lush green foliage that attracted us to the property was in fact bittersweet vines growing on the dead or nearly dead trees it was choking.

How did we not perceive that the trees had been neglected for decades?

I started to make my way into the 10 acres of woodland that we purchased with the property. There was one short but clear path that led to a dumping area and from there I could see the sad reality of what was to become a decade-long effort.

Aided by knowledgeable friends and online information sources, we developed a triaged approach to our work. First, we had to get into the woods to be able to work safely. We removed some of the dead trees along the periphery of the woods, along with their bittersweet assassins, using a hand saw to cut the thick vine and carefully brushing glyphosate on the exposed cut. Critically, we never sprayed the glyphosate to ensure there was no collateral effect.

At the time, it seemed obvious to next remove the spikey shrub barberry as it made navigation difficult and painful. I found out years later that barberry plays a key role in undermining the woodland ecosystem. It turns the soil pH alkaline with its decomposing leaf litter and stacks the odds against native plants. Barberry removal is treacherous work and, for several infested areas, we enlisted help to speed the process along. I plan to write about this invasive shrub again in detail.

Once the woods could be accessed, we encountered young trees in the hundreds bound by bittersweet vines; almost all have been rescued over the course of the past 10 years. Unlike the older vines, these can be snipped with a pair of bypass loppers or pulled out by hand. Once unshackled (and some with scars in their bark as evidence of captivity) the trees were able to resume their rightful place, creating a critical understory in a mostly mature woodland. This is arduous but satisfying in the extreme.

Vine and barberry removal allowed me to see the woods in ways I did not think possible.

I developed an eagle eye for garlic mustard which, like bittersweet, is highly detrimental to the native woodland. Garlic mustard is allelopathic, meaning that it sends out chemicals in the soil that deter other plants from growing nearby. I could spot this villain in its early form as an innocent looking groundcover as well as its, later, elongated, seed-producing form.

Once expanses of land were cleared of invasives, I began to see new plants. These grew spontaneously, as if the “all clear” signal had been given. Shrubs, notably maple-leaf viburnum with their delicate white flowers, currant and later, after a few years of improving soil acidity, low-grow blueberry. Also delicate herbaceous plants: black cohosh, baneberry, Canada mayflower, trillium, partridgeberry and rare clubmoss are among the many gorgeous woodland plant life that emerged in place of the non-natives.

In my case, seeing was the first step to developing a fascinating, rich relationship with nature in general and the woods in particular. There are important environmental reasons to restore the land around us and I expect to cover these in future columns. But in much the same way that we spend time and money gardening— installing plants to create a multi-sensorial experience — here, in the woods and our meadows, we can ungarden, removing non-native plants to create the conditions for native re-growth and allow nature to gift us its own kind of multi-sensorial experience.