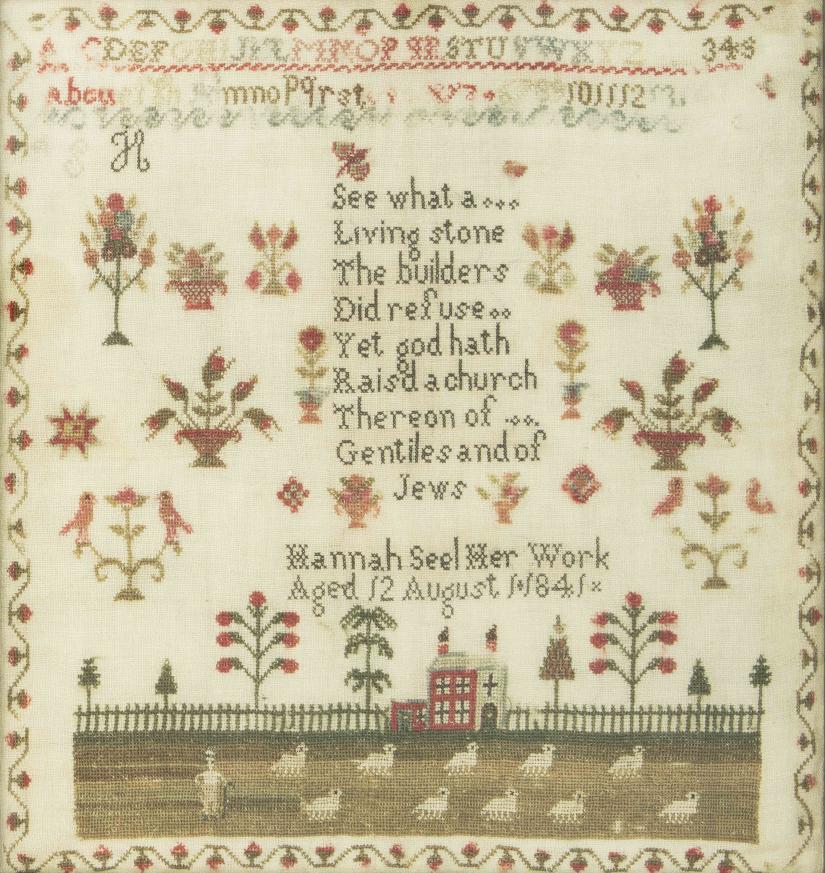 Fifty-five samplers from the collection of Alexandra Peters will be on display at the Sharon Historical Society & Museum from June 18. Many of the classic sampler styles are represented, including ones where young women learned their alphabets and basic stitching styles; and more complex ones that show geography and genealogy. Photo by Francesca Lally

A Sampling of Samplers at Sharon History Museum

Quilts are more obvious. You can find them at museums, at church fairs, you can find old ones and new ones, hand-sewn examples, machine-made examples.  I love quilts, too, don’t get me wrong but there’s something about a child’s sampler that, to me, makes quilts seem mundane.

When I was a child myself, I became fascinated with samplers and wanted very badly to make one of my own. A combined lack of discipline, skill and motivation stood in the way of achieving that dream.

I’ve always kind of thought that my love of samplers was a personal oddity. It was, therefore, a surprise when Alexandra Peters,  who lives in Sharon, Conn., emailed to tell me that the Sharon Historical Society and Museum will have a showing of her sampler collection from June 18 to Oct. 15.

A sampler collector? I felt like Robinson Crusoe finding Friday’s footsteps on the beach.

Peters said she discovered samplers about 25 years ago and since then has put together a collection of 120 (there will be 55 on display in the Sharon show).

I love samplers for their rustic, almost innocent simplicity, and I love them because I love fonts and type and letters and because I like handwork, such as embroidery.

Peters is drawn to samplers because they are like living history.

“I saw one long ago in a museum and was enchanted to discover that it was made by a little girl,” she recalled. “I always wondered where the girls were in history, but here it was, an artwork by a literate girl. I started buying any sampler I saw, but I really didn’t know what I was doing until I began researching and reading and becoming obsessed with samplers.

"The internet has made doing genealogical research at great depth possible. Now when I find a sampler I like, I look up the girl, her family, her town, other samplers like it, whatever I can find, before I buy it.  It’s a thrilling detective hunt, for me.”

Peters also sees a feminist angle to the samplers.

“We are so focused (understandably) on what was withheld from girls and women,” she said, “that their skills and accomplishments have been forgotten or not taken seriously.”

For many young women, samplers were a way to practice their literacy skills as well as to learn an essential domestic skill: sewing.

“These are not cute little handicrafts,” Peters said. “It was practice for the work they would be doing their whole lives. Made at school, the samplers the girls brought home were taken seriously enough that they have survived and been handed down for generations.”

Many samplers in museum collections were done by young women in affluent families — the girls whose families could afford to send them to school. But girls from poor families, the ones who would actually need to learn to sew, also made them. These simpler samplers are often more charming and endearing than the sophisticated embroidery projects turned out by young women of leisure.

Peters said she is particularly proud to have a sampler “made by a free Black girl in about 1830. She comes from a historically important family, because her parents were active in the Underground Railroad in Maine, where freedom seekers on their way to Canada often arrived by boat. It’s a very large genealogical sampler.

“To me it is really moving that this African American family, with so many odds against them at the time, lived well, educated their children and took risks to look out for others.”

Samplers have been made in many parts of the world and from as early as the 1400s (for a detailed history of samplers, go to www.vam.ac.uk/articles/embroidery-a-history-of-needlework-samplers).

For Peters, the samplers are very much an entry point into American history — which she is actually just learning.

“I came to the U.S. from England, when I was 10,” Peters said. “I knew nothing about American history. I had never heard of the American Revolution — that isn’t taught in British schools!

“It wasn’t until I moved to Sharon in 2005 and went to the Sharon Historical Society to research my 1794 house, that I discovered the fascination of American history. Now I collect only American samplers, and they look great in my house. I have over 100 of them. I’m very happy to bring the fruits of my research back to the Sharon Historical Society.”

There will be an opening reception for “Sharon Collects: Samplers from the Collection of Alexandra Peters” on Saturday, June 18, from 5 to 7 p.m.  For museum hours and more information, go to www.sharonhist.org.