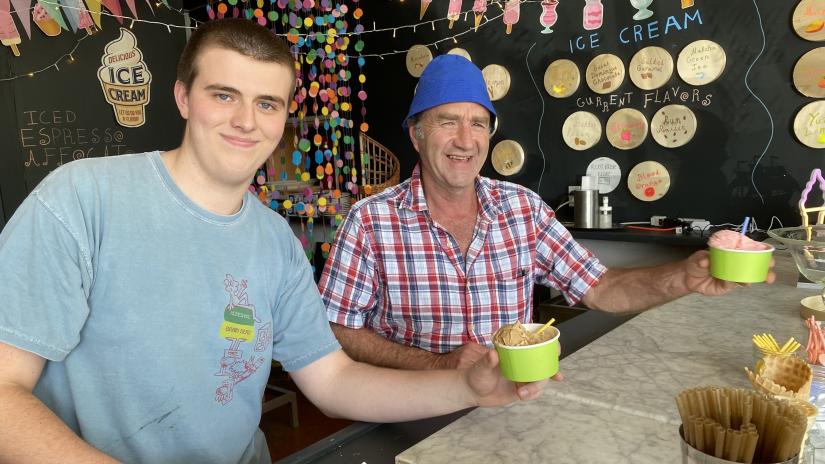 Not Your Every Day Ice Cream Cone, at Le Gamin

Somehow, nothing that happens at Robert Arbor’s Le Gamin restaurant in Sharon, Conn., is ever ordinary. The elegant French restaurateur manages to give everything he does a little Gallic flip.

For the new weekly backgammon sessions at the café, for example, there is an opportunity to learn French phrases related to the classic two-player game.

Anyone of any skill level is invited to come play at the restaurant on Saturdays from 9 to 11 a.m. Coffee and croissants are available; so is training in the game, which was invented in around 3000 BC but seems to have had its last peak in popularity in the 1980s, when it became an essential young urban accessory.

Now … not everyone wants a croissant or other bread product for breakfast. For those diners, there is a new option: the affogato, which is a latte that has been poured over ice cream.

Yes, it’s true — and the reason that the affogato is now available is that Le Gamin has opened an ice cream parlor next door to the main restaurant, in what was a boutique with imported French clothing and accessories, run by Arbor’s wife, the photographer, stylist and jewelry designer Tam Tran.

And as noted above, Arbor never just “does” something; he finds a way to make all his efforts extra special (while making it look super simple, bien sur).

Everyone of course has a favorite ice cream, whether it’s the twist cones from the gas station or the scoops from other favorites such as Fudgy’s in Amenia, N.Y., Candy-O’s in Millerton, N.Y., the Four Brothers in Millerton —and even Dairy Queen for those adventurous enough to travel to Winsted and Torrington, Conn.

It’s not a rap on those excellent vendors of frozen delights. But Arbor’s ice cream is just a little bit more extra special.

The brand is Mont Blanc, made “by a French guy in Brooklyn,” Arbor says casually.

This tiny company, which doesn’t even has its own website, produces about 50 exotic flavors (including, occasionally, cucumber sorbet). The owner, according to Arbor, was trained at the legendary Berthillon in Paris.

“He is a maître glacier,” a master ice cream maker, Arbor said.

The little shop next door (which was a hair salon many years ago) still has a few items of clothing (including the distinctive bucket hats that Arbor has taken to wearing every day).

But mostly there is ice cream, by the scoop, in an affogato, as a root beer float.

This is expensive ice cream. A single scoop costs $4.50, a double is $6.50. The affogato is $7.50, a root beer float is $6. But these days, it’s easy to drop $100 for lunch for two at an outdoor snack shack (assuming you’ve ordered two lobster rolls with a side of truffle fries).

And this is an ice cream experience worth the ride in the car to get to Sharon.

The flavors change depending on availability from Mont Blanc. So far, said scooper Cyrus Kearney, the favorites seem to be salted caramel, cinnamon, and cookies and cream. Arbor himself is partial to the rum raisin.

Kearney is a recent graduate of Housatonic Valley Regional High School in Falls Village, Conn. Most of the ice cream store staff are also local youth, out of school for the summer.

“We started to talk about doing ice cream last summer,” Arbor said, “but we didn’t have enough time or enough people. Now we have students from Housy to help.”

Information is also available on the Legaminstudioagraire Instagram page. Ice cream is available seven days a week from 1 to 9 p.m.