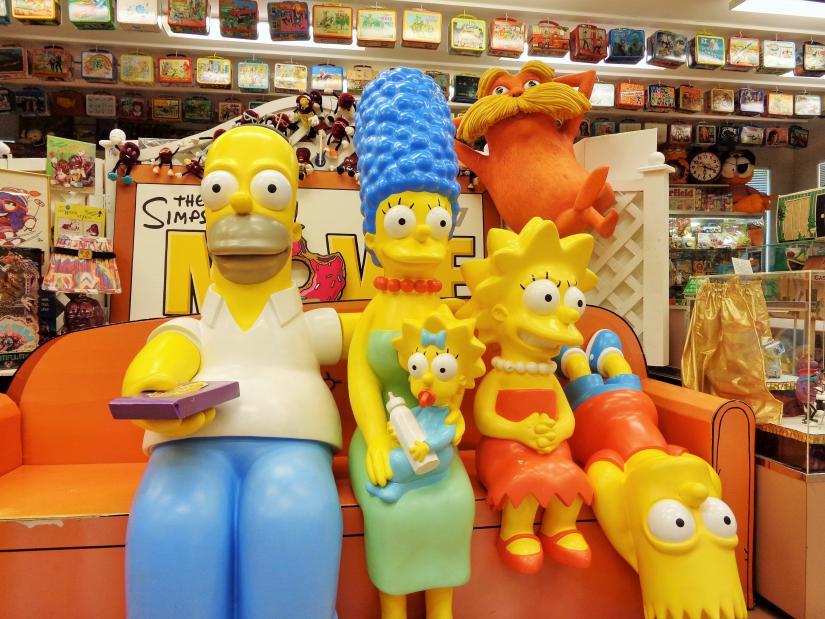 Visitors of all ages enjoy posing for pictures with The Simpsons. Photo courtesy of the Barker Character, Comic and Cartoon Museum

A Museum Visit With Something For Everyone

The gang’s all there: Shirley Temple, Popeye, Batman, the Simpsons and Betty Boop. Also, The Hulk, Barbie, Wall-E, Harry Potter, G.I. Joe, Charlie McCarthy and Howdy Doody. Visitors will also encounter Mickey and Minnie, the Three Stooges, the California Raisins, the Pillsbury Doughboy and too many other childhood characters, superheroes and legends to name.

From the moment you  walk past the life-size statue of Po from the movie “Kung-Fu Panda” as you enter the Barker Character, Comic and Cartoon Museum in Cheshire, Conn., you’re in for a trip down memory lane — or a flashback to the beloved Saturday afternoon cartoons of your childhood. It’s a sure cure for cabin fever and a fun spring break outing for the entire family.

Nostalgia on steroids is a fitting way to describe the experience, sure to delight the young and the young-at-heart, whether 8 or 80.

“We’re pretty much like a nostalgia machine over here,” said museum docent Blake Bassett with a laugh. “We love to watch people’s expressions when they see a toy they remember from the ’30s or ’40s. They can often tell you exactly how it works.”

A common lament that usually follows, she said, is, “My mother threw mine away.”

Not so for museum owners Jerry and Stephen Barker. The 3,500-square-foot space includes the personal collection of their late parents, Gloria and Herbert Barker, who amassed about 80,000 items over more than four decades, including toys that their children had played with. A small number of items have also been donated by collectors.

The Barkers started their collection by visiting tag sales at a time before people realized that cast-off toys had an intrinsic value and interest for future generations. While the items were considered run-of-the-mill in their day, they are coveted collectibles today.

Two of the oldest toys in the collection prove that gravity works: They are the cast-iron elephant ramp walkers. Manufactured in 1873 by the Ives Toy Company in Bridgeport, Conn., they were the first automatons to be powered by gravity. One hundred and forty years later, they work as well as ever and lumber obligingly down even the slightest incline.

Barrett said what makes them even more interesting is that the Ives Company originally produced guns and ammunition during the Civil War, but once the war ended, they turned to toys. The ramp walkers, explained Barrett, are made from melted-down bullet casings.

“What a segue: weapons of war to children’s toys,” she mused.

Another item with an eye-opening history is an unopened tube of Mickey Mouse toothpaste from 1933.

“It was made with a special milk of magnesia flavor, and comes in a lead tube; they didn’t know the dangers” of lead toxicity back then, she said. At the time, lead was considered an inexpensive and easy metal to mold into toys.

Child stars of yesteryear are also represented here. Back in the day, Shirley Temple generated not just ticket sales, but a great deal of toys and associated items.

Prizes from old cereal boxes and promotions are a hot ticket as well. From 1934 to 1942, cobalt blue table settings, manufactured by the Hazel Atlas and U.S. Glass Companies, were given away as premiums for Wheaties and Bisquick, and are prized by today’s collectors.

Remember Betty Boop, Bimbo the dog and Koko the Clown? Betty, the feckless flapper who danced through life with her canine boyfriend Bimbo, first vamped her way into the public’s hearts as a sexy chanteuse in 1930 and continued to lift movie-goers’ hearts throughout the Great Depression with her song-filled adventures.

Among the most popular attractions with all ages are an 8-foot-tall statue of the Marvel superhero The Hulk, which served as a promotion for the 2008 movie of the same name; and life-size characters from The Simpsons. Both invite plenty of selfies and family photos.

“They only made about 200 Hulks,” noted Barrett.

Their value
beyond nostalgia

While all the museum items include price tags to give visitors an idea of their current value, none of the items are for sale. One of the most expensive items is a Popeye heavy-hitter toy valued at $14,000, said Barrett. The toy mimics the popular carnival game where people test their strength by wielding a hammer, causing a bell to ring if successful.

Since the museum opened in 1997, the Barker family has welcomed visitors from around the corner and around the world. The collection, which spans the years from 1873 to the 2020s, stimulates discussion among the generations in a way that few museums can. Every generation will find favorite toys; historians can savor an unusual glimpse into styles and trends of the past.

In addition, the Barkers were dedicated to preserving America’s rich cartoon heritage, and founded the largest retail animation and entertainment art gallery in the world, Barker Animation Art Gallery.

Barker Animation had its Grand Opening in West Hartford, Conn., in 1993; and in 1994, operations moved to the Barker complex in Cheshire, Conn.

The gallery maintains a collection of vintage and current artwork from artists in the fields of animation and pop culture. To give this artwork more exposure, Gloria and Herb opened an additional gallery at The Tanger outlets at Foxwoods in 2016.

If you decide to visit

The Barker Character, Comic and Cartoon Museum is at 1188 Highland Ave. in Cheshire, and is open by appointment only (call 203-272-2357). Face masks are mandatory.

Each visitor to the museum receives a self-guided tour booklet, and while there can peruse the vast collection of animation art, fine arts and collectibles available for purchase in the gallery next door.

Visitors can also enjoy a scavenger hunt, and stroll the grounds and pose for pictures with life-sized cartoon character cut-outs.

“You get the whole museum to yourself for the entire hour, for a more personal, interactive experience,” said Barrett.