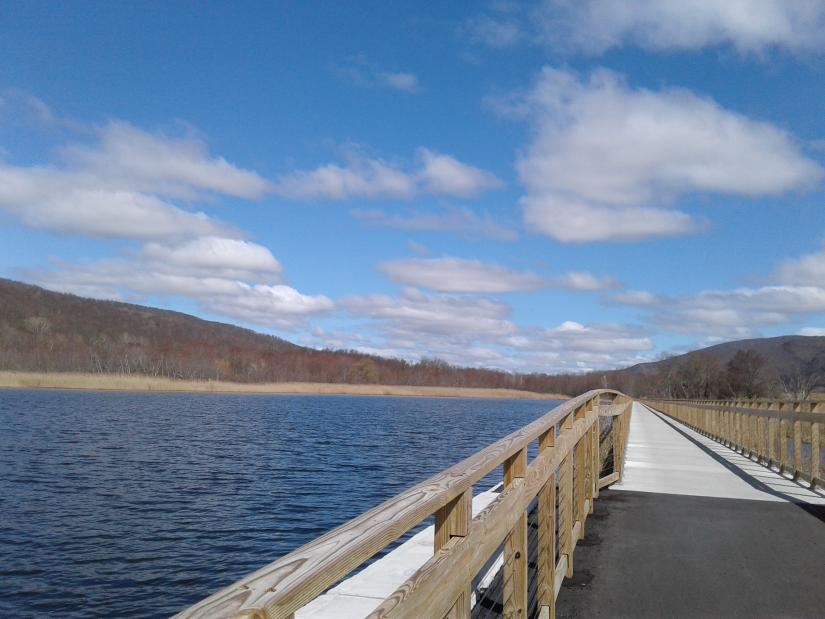 Riding along the Harlem Valley Rail Trail on a summer day, cyclists will soon experience the thrill of riding over the clear blue waters as they ride from the center of Millerton in the direction of Copake. Photo by Kaitlin Lyle

Finding Balance by Getting on a Bike

One of the things I love best about this area is that there are few limits to where you can ride your bike.

I have been on a bike for more than a decade, and I’ve ridden everywhere from the Hotchkiss Library in Sharon, Conn., to all around Block Island, R.I., and along sections of the Harlem Valley Rail Trail.

I seized any excuse to take my bike out on the ride, whether I was picking up milk downtown (balancing the gallon precariously on my handlebars), checking out a book from the library or riding to my former cashier job at the Sharon Farm Market.

When I was growing up in Sharon, my brother and I would ride our bikes down to the Sharon Pharmacy every fall to check out the Halloween costumes on display.

As I got older, my mom started taking me out on the Rail Trail to explore the trails.

Come winter, spring, summer or fall, you could find us riding down the trail, over ice patches and fallen leaves and past bodies of water and local wildlife.

We would start at Coleman Station in North East, N.Y., at the Sharon border, and ride to the center of Millerton. We’d later challenge ourselves with a ride from Coleman Station to the Wassaic Metro-North Train Station, sometimes stopping on the way back for an ice cream at Fudgy’s.

When the town of Amenia, N.Y., completed its long-awaited Trail to the Train project last fall, we immediately set our sights on the trail extension leading to the hamlet of Wassaic.

The newest section of the trail extending from Millerton to Copake has become a new favorite, one that I tend to ride in the early morning at least once a week.

After learning the hard way to always be alert, I no longer listen to music while I ride. I’ve come to prefer the break from technology and the chance it gives me to enjoy the sounds I catch on my ride.

No matter how many rides I’ve been on, the first mile tends to be the hardest as my legs slowly adjust to pedaling myself forward, but once I’m off, it’s a sensation akin to flying.

It never fails to astound me how the local area — the same one I’ve lived and worked in for most of my life — bursts with life, sound, color and scents when summer arrives.

Sometimes I’ll catch a whiff of honeysuckle or the smell of the lilac trees. I often hear the train whistle as it rides out of Wassaic.

I’ve seen everything on the trail from swans, turtles, geese and goslings to seasoned cyclists, dog walkers, teen skaters and even a man walking his LaMancha goat.

I’ve watched the communities I’ve grown to love demonstrate town spirit in unlikely places, from turning one of the pine trees on the Amenia section into an impromptu Christmas tree, to decorating rocks and placing them along the trail markers for Boston Corners and the train station.

She got back in the saddle again

But, again, I’m someone who learned from experience, that there are clear rules to keep in mind when exploring the trails.

For example, when you approach a crosswalk, it’s crucial for cyclists to disembark and walk to the other side before getting back on the bike again. I should know: I was in a biking accident in July 2015, just three days after my 21st birthday. I was biking ahead of my mom on the Rail Trail heading to Amenia when I got to the crosswalk. The last thing I remember was getting ready to pedal to the other side when I was hit by a car coming down the road, the impact shattering my hip socket and fracturing my tibia.

Two surgeries and months of physical therapy later, I was back at home and then back at college for my last year. It would be months before I’d be back on the bike again.

As luck would have it, there was a poster sale on my college campus the semester I went back to finish my degree. Among them was a simple black-and-white poster featuring a picture of a bike similar to the one I ride today. Above the bike, written half in print and half in cursive, was a quote from Albert Einstein: “Life is like riding a bicycle: to keep your balance, you must keep moving.”

Take it from someone who learned the hard way: Don’t take these rules for granted. The trails are there for you to use, but they don’t give you free reign over the road.

Respect the trails and your fellow cyclists, and always be aware of what’s happening around you; all it takes is a moment to change your day.

And for those of you who didn’t grow up on “Mick Harte Was Here” — Barbara Park’s coming-of-age story about a young girl who loses her brother in a bike accident —  don’t disregard the helmet.

Enjoy the thrill of the ride; but don’t get so caught up in it that you forget to be cautious.