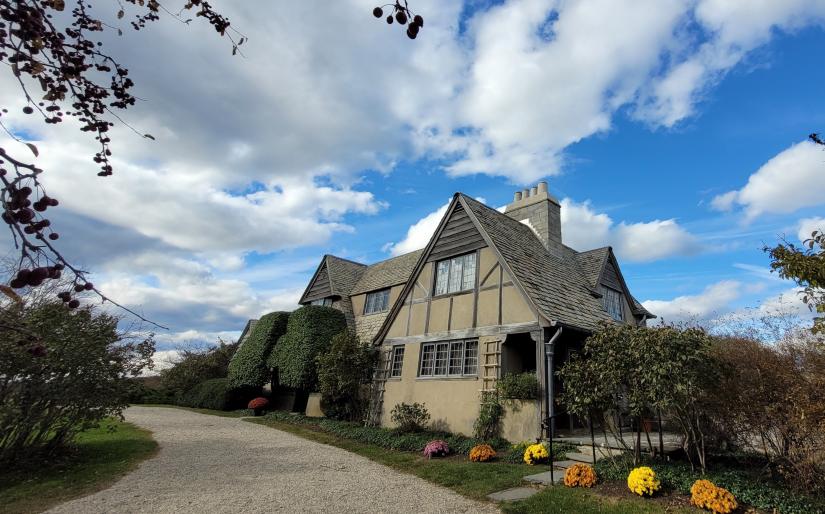 The flowers are gone now at Topsmead State Forest in Litchfield, Conn., revealing the structures behind them. It’s a perfect time for a day trip. Photo by Debra A. Aleksinas

Fall and winter usher in new seasons of beauty and tranquility throughout the 510-acre Topsmead State Forest in Litchfield, Conn., whose crown jewel is an elegant yet understated circa 1925 English Tudor-style cottage.

Edith Morton Chase built her home at Topsmead as a summer escape, but after the scent of spring and summer flowers is gone, the estate unfolds in a different way.

Trees that have shed their leaves reveal the bones of a landscape that captivates the senses. The main house, designed by noted architect Richard Henry Dana Jr., is the focal point, with its cypress exterior woodwork, lead downspouts, walls of brick and stucco, and slate roof.

Upon her death in 1972, Chase bequeathed her beloved country estate to the people of Connecticut and requested in her will that Topsmead remain undisturbed and in “a state of natural beauty,” according to a history of the forest on the state Department of Energy and Environmental Protection (DEEP) website.

Over the years, an endowment left by Chase — a savvy businesswoman, who built up her wealth and real estate holdings over the decades —has been used to preserve the buildings and grounds as they were at the time of her death.

The former landowner adored the outdoors, as is evident from the landscaping around the cottage. Twisted old apple trees and ornamental cherry trees line the drive, complementing the home’s striking architecture. Their leaves long gone, beauty is revealed in the few remaining apples high atop the trees, or the clusters of ruby-red cherries suspended from barren limbs, making for a breath-taking silhouette against an azure sky.

Plantings of holly and juniper come into focus, now that the forsythia, peonies, lilacs and fragrant perennials are enjoying their seasonal slumber. As the nights grow longer, the curled, fallen leaves and once-soft flower petals allow the sculptural evergreens and mature trees to make an elegant statement.

According to a history of the property on the DEEP website, in 1917 Chase received 16 acres of land on Jefferson Hill in Litchfield from her father, Henry Chase, the first president of Chase Brass & Copper Company in Waterbury, Conn.

She originally built a rustic cabin on the property, which was later replaced by the current residence. In 1927, according to the historical account, Chase purchased the former Buell Farm and renamed the property Topsmead Farm to reflect its “top of the meadow” location. At one time the farm produced food used on the estate.

On a recent late-morning visit, a handful of visitors strolled the lawns and paths and rested at picnic tables scattered throughout the site. The Edith M. Chase Ecology Trail offers a 7/10ths mile walk with interpretive signs. A weathered sign directs visitors to the forest’s butterfly garden and wildlife viewing blind.

The park, on Buell Road, is open for year-round passive recreation, including walking, bird-watching, picnicking and cross-country skiing. Gates open at 8 a.m. and close at sunset. Visitors are invited to picnic on the grounds; open fires or grills are not allowed. Pets on a leash are permitted in the picnic areas and on hiking trails.

The park and exterior of the building can be visited daily all year long; the gates close at sunset.

For more information, go to https://portal.ct.gov/DEEP/State-Parks/Forests/Topsmead-State-Forest, or follow the Facebook link for the Friends of Topsmead State Forest.