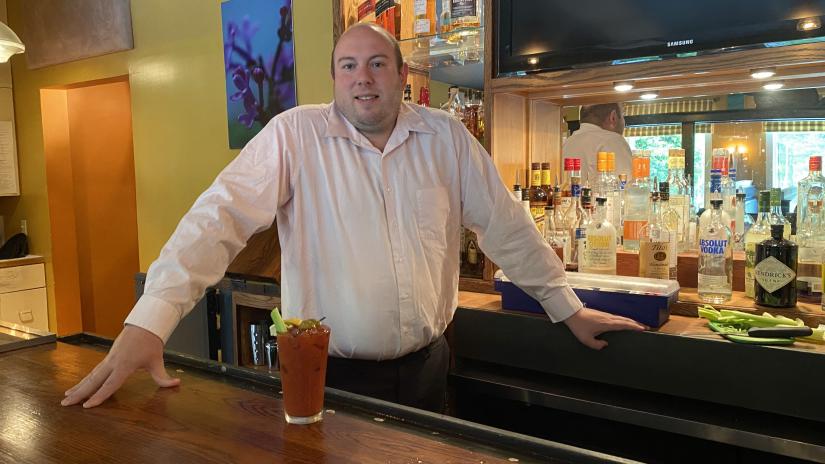 Come taste Andy Williams’ award-winning Bloody Mary mix at LaBonne’s market on June 25, where the mix is now being sold in bottles. Photo by Cynthia Hochswender

The history of the Bloody Mary cocktail is vague, with no one really certain how it got its name or who invented it in the first place.

But one thing we do know is that Salisbury, Conn., native Andy Williams has invented a particularly delicious base mix for the cocktail, which is now being sold at the LaBonne’s markets, including the one in Salisbury.

Williams has been working at area bars since 2001, starting  when he was 16 at The Boathouse in Lakeville, Conn., when it was still owned by Danny O’Brien. Williams is now on duty at Lakeville’s Black Rabbit Bar and Grill on weekends, where he serves up his very tasty tomato-based beverage with or without vodka (the tamer version is, of course, known as a Virgin Mary).

The perfect Bloody Mary mix took about a decade to perfect, Williams said. It has nine ingredients, including tomato juice and celery salt (and the requisite stalk of celery — no one seems to know how that cocktail tradition got started either, in case you’re wondering).

He’s very specific about his vodka — he likes to use Tito’s, which adds some smokiness to the drink.

Other ingredients include citrus juices, A1 sauce, Worcestershire sauce, horse radish and Tabasco — but Williams promises that he’s found a happy balance between too hot and not hot enough.

The ideal Bloody Mary, he said, is one that can help cure you of a hangover without scorching your windpipe.

One ingredient you will not find in a Williams Bloody Mary: filet mignon.

“I’ve been to many competitions where there will be an entire steak in the Bloody Mary.”

“And if it’s for a contest, sometimes I’ll add a couple of grilled shrimp.”

The mixture is popular enough that LaBonne’s (where Williams is also an employee; and in his spare time he does a blog called Simply Sports) is now selling the mix at all its stores.

Look for it at the store in the front cooler, next to the fruit juices. It sells out quickly. Williams said he generally makes eight or nine bottles every Thursday.

“I make it in small batches, so you can taste the freshness.

“Once you taste it,” he promises, “you will never want to try another Blood Mary mix.”

And as for the history behind his signature drink, Williams subscribes to the idea that bartender Fernand Petiot mixed the first Bloody Mary in Paris at what would become Harry’s Bar. The drink debuted in 1921, which Williams notes is 100 years ago.