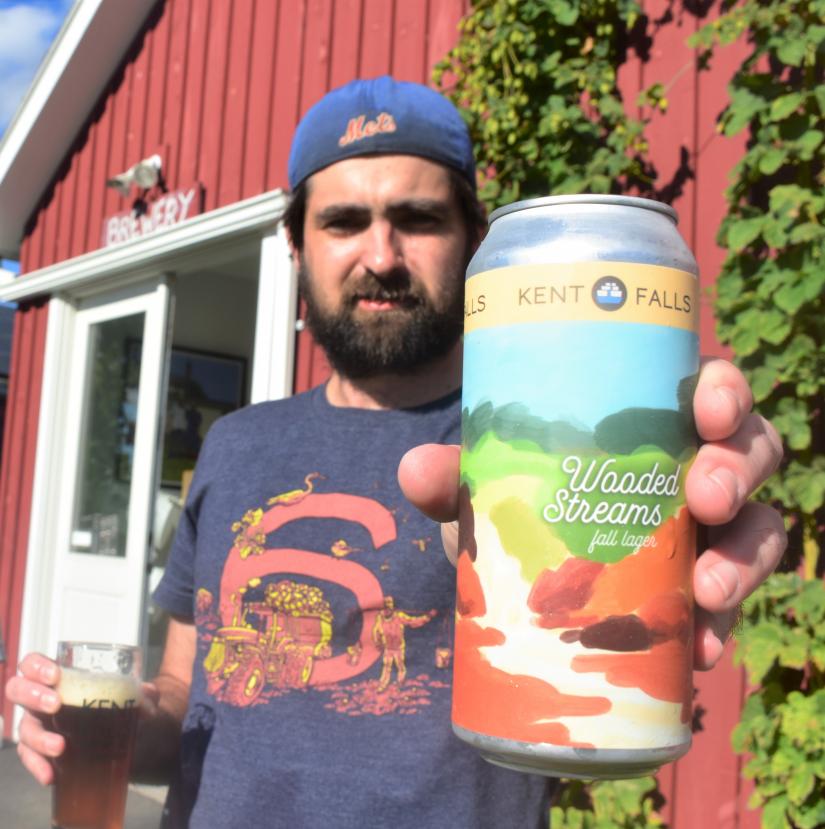 Autumn in a Glass: Enjoy Falls’ Beers This Fall

How do you capture a season in a beer? In the winter, a bold, roasty stout complements the dark hours. In the summer, a citrusy India pale ale embodies the moment. Come fall, brewers search for the right amount of amber, sweetness and crispness to match the promise of refreshing air and leaves underfoot.

Kent Falls Brewing (33 Camps Rd., Kent, CT 06757) recently released a malt-forward “fall lager” called Wooded Streams that balances the refreshment you get from a lager with a bread crust flavor that lingers in a robust beer.

“It’s a celebration of fall,” said Barry Labendz, one of Kent Falls’ owners. “As the weather turns and it gets cooler, it’s easier to drink something with more body to it.”

With its deep, copper tone and lower alcohol, it’s similar to beers swigged at German festivals, including Oktoberfest in Munich. Kent Falls’ take on it is not quite to Oktoberfest-beer style, primarily because it uses local ingredients. Its malt comes from Connecticut and Massachusetts.

The brewery’s rural location and stunning views make it a destination, especially as the leaves turn as dark as Kent Falls’ Candy Cap imperial stout or as golden as their Pilsner, known as The Hollow.

Labendz noted that enjoying any beer, but especially a fall beer, means taking in the experience with all your senses. At Kent Falls, that can mean catching a brisk breeze, sitting at a picnic table listening to kids laugh and crunch in the leaves, sipping a warming porter.

“The fall gets you where you want to be drinking something warm outside like a cup of tea or coffee,” he said. “A little higher alcohol beer fits that sort of vibe.”

Another nearby brewery that relishes the season is Great Falls Brewing (75 Main St., North Canaan, CT 06018). Its taproom in a converted train station is continually refreshing its taplines with seasonal offerings.

In the spring, their Fruit Snack Berliner Weisse, a wheat beer made with lactose, with varieties that feature passionfruit and pineapple, is a sweet lift out of the doldrums. And you can taste summer in their Lazy Hazy Housy IPA, which coaxes mango from the hops.

But before diving into their Ski Tracks spiced winter ale, there are two autumn beers that complement the invigorating season.

Its lighter, cleaner twist on a traditional Oktoberfest-style lager is called Layderhoz'n Oktoberfest. It catches your attention with its malty aroma but doesn’t leave a cloying aftertaste. It’s crisp and begs for further sipping.

Its deep amber harvest ale, Channel the Flannel, might be a reward for raking leaves or a pleasant pairing with apple fritters.

Will Siss is the “Beer Snob” columnist, podcaster and author of "Connecticut Beer" (The History Press). He can be reached at www.beersnobwrites.com