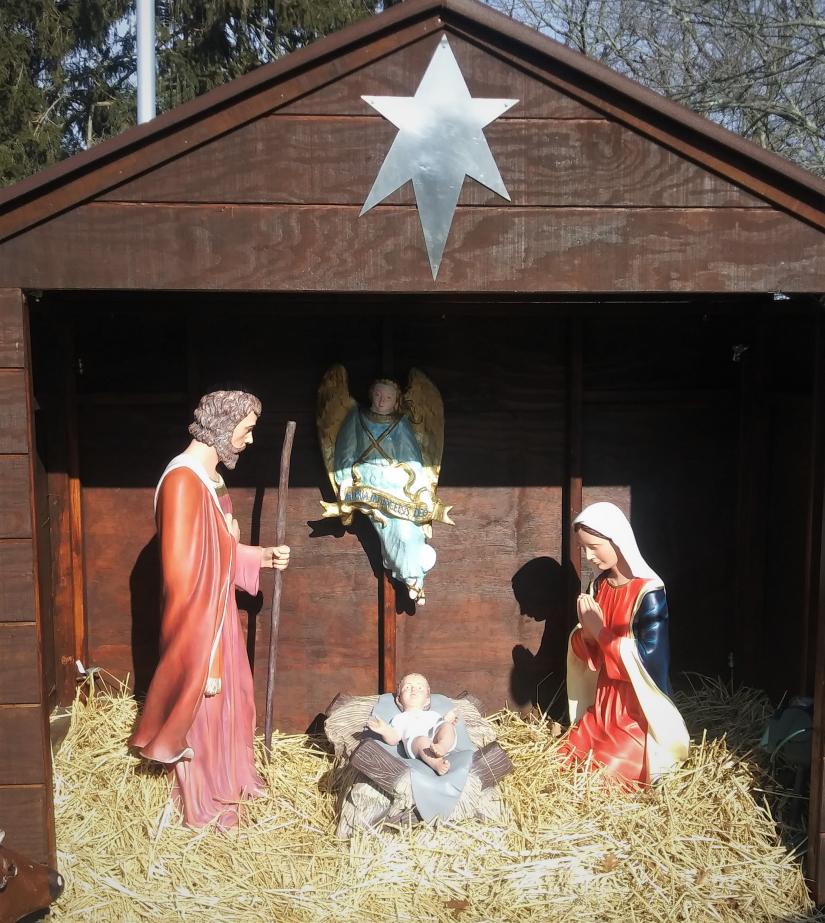 The creche on Bethlehem’s town Green is the centerpiece of the town’s two-day Christmas Town Festival, which will take place this year on Friday evening, Dec. 3, and Saturday, Dec. 4. Photo by George Murdock

Named after the birthplace of Jesus, Litchfield County’s little town of Bethlehem lives up to its reputation as “Connecticut’s Christmas Town.” Each year, from Thanksgiving to Christmas, thousands of visitors from near and far converge on this quaint, rural community of about 3,500 residents to partake in beloved holiday traditions.

Bethlehem’s Christmas Town Festival came about in 1980: The community pulled together to raise money to replace the Memorial Hall, which had been destroyed by fire.

The festival is run entirely by volunteers, with the goal of raising money to support the town’s treasured community center.

Bethlehem’s history is, fittingly, steeped in religion. The first theological seminary in the country was established there, as was the 400-acre Abbey of Regina Laudis on Flanders Road, founded in 1947 as one of the first houses of Benedictine nuns living in contemplative silence in the United States.

The Abbey is home to a rare, 18th-century gem: a Neapolitan creche. The recently restored nativity scene, comprising hand-carved figures of wood, terra cotta, jute and porcelain, has been viewed by people from all over the world. It was gifted to the Abbey by artist and philanthropist Loretta Hines Howard, who also donated a similar creche to New York City’s Metropolitan Museum of Art.

Unfortunately, the creche, which has been a big draw to Bethelhem during the holiday season, will be closed to the public this year, as it was in 2020, due to COVID-19.

A spokesperson at the Abbey said tentative plans are to reopen the grounds — including the Monastic Art Shop, the Neapolitan creche and a second, charming rustic nativity scene created by Connecticut artist Lauren Ford — to the public in spring of 2022.

Visitors to Bethlehem this holiday season will still have plenty of activities to make a daytrip worth the effort.

Among the planned attractions are the 40th annual Christmas Town Festival, slated for the first weekend in December; the unveiling of the 2021 limited-edition pewter Christmas ornament and visits to the Bethlehem Post Office, where generations of families have hand-stamped their holiday cards and packages with one of 83 uniquely designed rubber stamps, known as a cachet.

The festival is at the heart of the holiday festivities and is one of New England’s favorite celebrations. The two-day event around the town Green opens on Friday, Dec. 3, 5 to 9:30 p.m., and continues on Saturday, Dec. 4, from 9:30 a.m. to 4 p.m. The opening ceremony and tree lighting is at 6 p.m. on Friday with Irene O’Connor, honorary emcee and WFSB Channel 3 TV personality.

There will be music, bell choir concerts, lighting of the 85-foot town Christmas tree, photos with Santa, hayrides, a book and cookie sale, craft and food vendors and craft workshops for children and their parents.

The young and young-at-heart are invited to take a roaming train ride, visit Santa’s workshop or go on a scavenger hunt.

To counterbalance all the holiday fun foods, there will be a 5K “Santa Made Me Do It” road race on Saturday, Dec. 4 at 10 a.m.

Festival Committee Chairman George Murdock said as long as the weather cooperates, he expects a robust turnout, especially since the event was put on hold last year for the first time in four decades due to COVID-19. “We could see up to 3,500 people — which equals the population of Bethlehem,” noted Murdock.

Coveted Ornaments and the Postal Cachet

The tradition of the Bethlehem Post Office’s cachet harkens back to 1938 when the late Earl Johnson, the postmaster at that time, designed a rubber stamp with the message “From the Little Town of Bethlehem, Christmas Greetings.”

Since then, new designs have been created by town residents, artists and children.

Bethlehem town officials estimate that hundreds of thousands of holiday greetings are stamped and mailed each season from the small East Street Post Office by people from all over the world. The Post Office will have extended hours during the days of the festival, according to Murdock. It will remain open until 8 p.m. on Friday, and until 3 p.m. on Saturday.

The 2021 Christmas Town Festival Ornament, “Nativity on the Green,” sells for $10 and is available at Town Hall. Murdock said the limited edition, pewter ornaments are sought-after collectibles.

“They are stamped with a sequential number, and only 1,150 are made. When they’re done, they’re done.”

Admission to the festival and parking at the fairground are free. The town Green is at the junction of Routes 61 and 132. Shuttle bus service will run continuously between the fairground and the Green.

Parking in town during the festival is by permit only and is limited to cars with a handicapped tag, vendors and volunteers participating in the festival. Murdock suggested that anyone looking to park in the permitted spaces at Town Hall enter town from the south, as roads will be closed around the Green. For more information go to www.christmastownfestival.com, or call 203-266-7510, ext. 400.