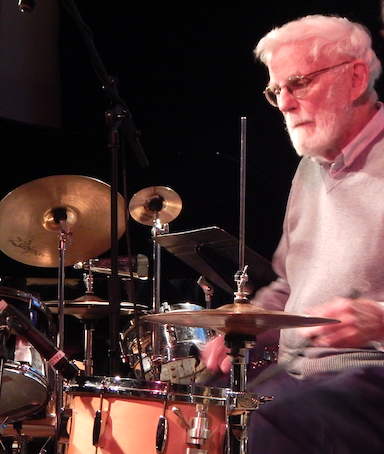 Beloved artist and jazz musician Robert Andrew Parker and Jive by Five are back on stage at Music Mountain after a two-year hiatus. Photo courtesy Scott Heth

Robert Parker and Jive by Five Return to Music Mountain

In recent years, Robert Andrew Parker has been best known locally for his world-famous art, which he generously shares at area fundraising art shows (to the delight and good fortune of his legion of fans).

Parker used to be equally well-known as drummer for the jazz group Jive by Five, which has been fairly quiet for the past couple of COVID years.

The band is out of retirement now and will perform this weekend, on Saturday, Aug. 27, at 7 p.m. at Music Mountain in Falls Village, Conn., which is normally home to intimate chamber music performances.

“Bob is 95 years old and he still swings like crazy," said Scott Heth, piano player with Jive By Five and formerly the director of the Audubon Center in Sharon, Conn.

“I was playing steady with Bob for over 20 years, mostly at the Interlaken Inn in Lakeville until COVID hit.” said Heth.

“I am very excited to be able to play with him again, especially at Music Mountain.”

Sharing the stage with them is another local favorite, the singer Wanda Houston, who is known for her performances with her HBH band — and for recordings and performances with greats including Barbra Streisand and Celine Dion.

And there’s more! Another beloved local on the small Music Mountain stage will be trombonist Peter McEachern, who is chairman of the music department at the Salisbury School when he isn’t touring with Clarence “Gatemouth” Brown, Lamonte Young and the Thomas Chapin Trio.

It’s no surprise that Parker’s son inherited his love of jazz. Christopher Parker is a respected and renowned jazz drummer, and will join his father and the rest of the band on Aug. 27, as will saxophonist Kris Jensen and bassist Adam Coté.

This is a concert not to be missed by jazz fans. Tickets are available at www.musicmountain.org and are $35.