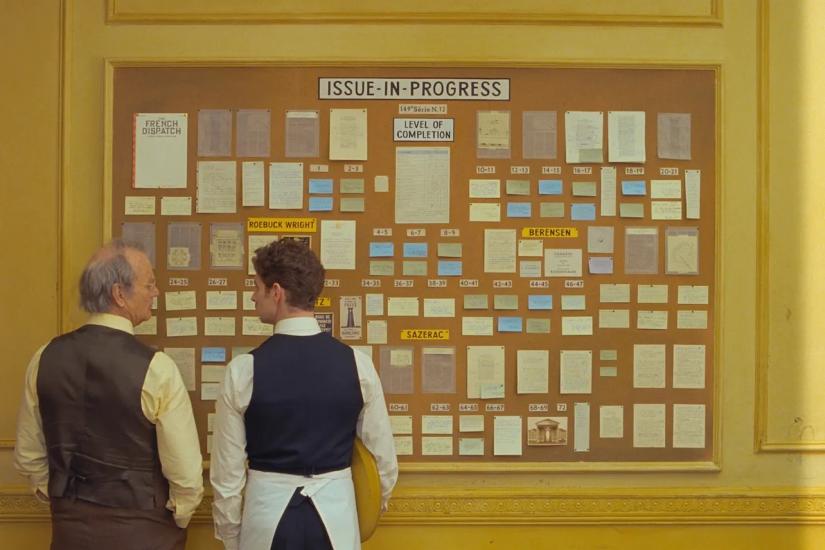 “The French Dispatch” is a film about France, about art, about youth and love and the 1960s —  and above all about journalism, with Bill Murray, at left in photo, portraying editor Arthur Howitzer Jr. Photo from The French Dispatch

Why You Should Watch ‘French Dispatch’ Again

Perhaps you saw Wes Anderson’s wonderful new film, “The French Dispatch,” on the big screen at The Moviehouse in Millerton, N.Y., or another theater and perhaps you were confused by it.

My unscientific survey of people leaving the theater showed a high degree of confusion. This was of course most profoundly true among people who are not obsessed with Anderson and his other films such as “Moonrise Kingdom” and “Rushmore.”

Anderson doesn’t just make movies; he creates worlds. They are highly detailed and have a very strong and consistent esthetic. If you walked out of the theater thinking that “The French Dispatch” was disjointed I would highly recommend that you give it a second chance, now that you can stream it at home — and can pause it when you have a question or just need to catch your breath.

Pausing it will help you understand

Yes, you will have to pay for it again ($5.99) and that’s annoying after you paid for tickets to see it in the theater. But if you want a deeper understanding of Anderson’s work (his oeuvre, if we want to get fancy) and also if you love Bill Murray, Timothée Chalimet, Owen Wilson, Frances McDormand and especially if you consider yourself a fan of The New Yorker magazine, I think you should go for it. Set aside extra time so you can (yes, really) pause it often.

Why bother? For one thing, it will give you a chance to find out who some of the actors are. There is an extraordinary cast that includes a dozen or more actors that you might know but might not recognize here.

French actress Lea Seydoux is one example, playing a prison guard who is very deadpan and often nude. She is unrecognizable here if you only know her from her role as James Bond’s lover in “Spectre” and the new “No Time To Die.”

You might also not recognize her co-star in her “episode” within the film, Benicio del Toro, also a veteran of a James Bond film and also largely unrecognizable as an overweight, hairy murderer and acclaimed artist.

And then there’s Bill Murray, heartbreakingly wonderful, and Tilda Swinton, perfect down to the most minute details as a 1960s society art expert and Frances McDormand as a scrappy journalist at the far other end of the glamour spectrum.

And of course this is why I love this particular Wes Anderson film above all others: It’s about journalism and writing and especially about editors. Just watch the way French Dispatch editor Arthur Howitzer Jr. (Murray) sits down and crosses his legs as he begins to read a piece by one of his writers; that’s how editors read if they’re not at a desk. The details in this movie are exquisite.

But identifying all the actors hidden like Easter eggs in this film isn’t the only reason to watch it on a streaming service. Side note: The actor who seems to be the greatest revelation for many people is the relatively unknown Jeffrey Wright, who starred in “Westworld” on HBO.

Another compelling reason to stream “The French Dispatch” is so that you can take a moment to read all the text “cards” at the beginning, which explain to you the format of the film.

This movie is, essentially, supposed to be one issue of The New Yorker (or a version of it, known as The French Dispatch). There is a text card at the start of the film that explains this, and there is another text card before each “article” that tells you how many pages long it is and which section of the magazine it appears in. There is running text on the sides of those introductory cards; if you freeze the frame and read that text, it is the actual article, which is translated into dialogue in the film segment that follows.

And of course it’s worth pausing at the end of the film so you can confirm that, for example, Anjelica Huston is the narrator for much of the movie.

“The French Dispatch” can be streamed through Amazon Prime Video, Google Play Movies and YouTube.