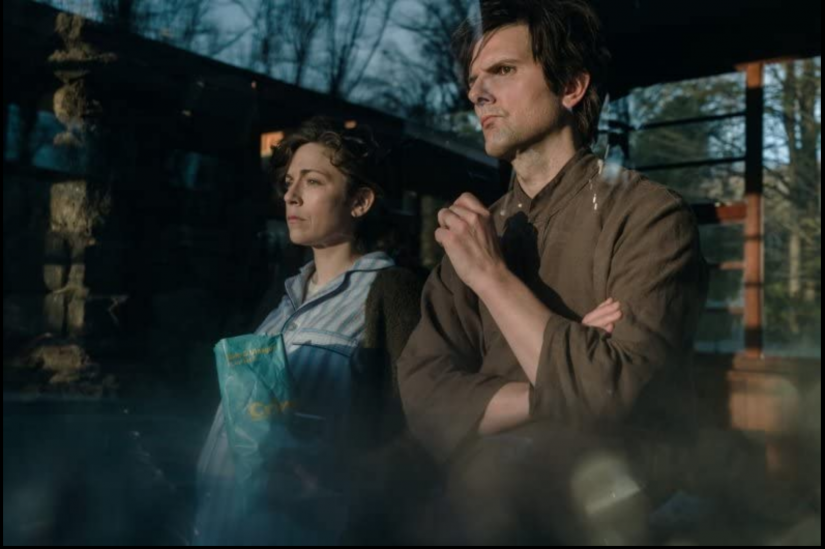 Adam Scott and Jen Tullock in “Severance.” Image from imdb of severance

Apple TV+ has joined the fierce battle among streaming services with some fine new shows. It’s the home of the feel-good shows “Ted Lasso” and “Coda” (Best Picture Oscar). Their new series, “Severance,” was created by Dan Erickson and directed by Ben Stiller. I’m not sure how it will make you feel, but the strange and unnerving plot will surely seduce you and keep you guessing through all nine episodes.

A mysterious and cultish corporation known as Lumon Industries employs persons whose workplace and outside lives are “severed” by an implanted microchip. The workers, or “innies,” sit robotically at computers, dragging numbers into folders and parroting the dogma of the company and its leader.

It reminded me of a future version of L. Ron Hubbard’s Church of Scientology.

At the end of the work day, they enter their outside lives; “innies” and “outies” have no memory of their other lives. This is surely a dark and eerie premise, but the show veers unpredictably from horror to humor.

In episode one we meet Helly (Britt Lower), a new recruit who does not quite buy into the severed life. Her boss, Mark (Adam Scott), and co-worker Dylan (Zach Cherry) gradually become her allies in an uprising that becomes increasingly tense and disturbing.

Another co-worker, Irving (John Turturro), befriends Burt (Christopher Walken), who runs a neighboring department. Some casting or directing genius has placed these two fine actors into a surprising relationship.

The episodes start slowly but build rapidly into a surprising and cliffhanging conclusion, as Helly’s “outie” life is revealed. Britt Lower’s Helly is especially engaging, but all the actors are terrific. This is the kind of intelligent, well-written and -acted thriller that puts stuff like “Squid Game” to shame. Don’t miss it.

Alfonso Cuaron has directed a wide variety of acclaimed films, including the Harry Potter movie,“Prisoner of Azkaban,” “Gravity,” and the autobiographical Netflix film “Roma” (2018), which won him the Academy Award for Best Director. But his best film, in my view, is this political thriller based on the novel by P. D. James.

The movie opens with a street scene in a near-future London, where a crowd is mourning the death of the youngest person on the planet. He was 18. No babies have been born in 18 years. A world without children has led to despair, social unrest and worse. Many cities are in flames, but Britain soldiers on, crowded with unwanted refugees.

The scene shifts to the home of Jasper (Michael Caine), who sits with his friend Theo (Clive Owen) smoking pot, listening to the Beatles, and speculating about reasons for the absence of fertility. Jasper says: “I was at a dinner party where an eminent scientist was asked this question. He replied: ‘I have no idea, but this stork is delicious.’”

This is a rare light moment in this fierce and thrilling film. Theo meets with Julian (Julianne Moore), an activist who enlists his help in escorting a young black refugee named Kee (Clare-Hope Ashitey) to safety. Kee, it turns out, is — miracle of miracles — 8 months pregnant.

“Children of Men” is very much a director’s film, notable for its futuristic production design and long takes, especially of furious action scenes, as Theo guides Kee through refugee camps and the beginnings of civil war.

There is little letup in the darkness and intensity, but there are many heroic moments and characters, and a sense of hope in the final scene. Rent or buy on Amazon, Apple and others.